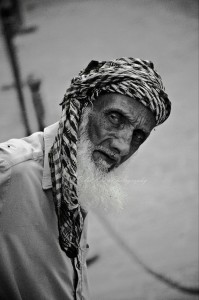 Peeling back his eyelids
to contest the glistening
tongue of morning
that rose to his memory,
he could not see.  And so
he lived another sepia day,
and another grey evening,
with the sage continence of islands.

The flux of voices deadened
by a defaulting ear,
of faces as dim as
far off planets carried him
in a trajectory of motion
denied to his legs.  Slowly,
he skinned a tangerine
in the sun, and orchestrated

an unheard symphony
with his voice; at least
his speech had not yet
overshot the alphabet.  And
at night, he drew another
dream from his tired repertoire:
fish drifting through splendid
corridors of coral architecture,

the lacteal earth
riotously offering fruit
and wheat and honey.  And yet,
from the street below,
not even the ordinary scent
of the Taali tree would reach him
to second his motion
in favour of Paradise.

Then one day he woke up
with the taut urban sky
building visions on the window
of bone-littered clearings
where horses and elephants
come to die, felt time
computing a countdown.
Or perhaps not.

Perhaps half-hearing,
half-sight and immobility
had frozen his intuition,
so that he died thinking
of his dust-laden orchard
and its line of humming poplars,
their wire-drawn branches
lit telescopically by the winter light
like skeletons painted on the sky.

Mehvash Amin was editor of Libas International, a lifestyle magazine based in Pakistan, for 11 years, and is currently Editor-in-Chief of HELLO! Pakistan. She has written both prose and poetry; her poetry has been published in an anthology, Tangerine in the Sun, as well as other publications, most recently in the Canadian journal Vallum, New International Poetics, Poets from Pakistan (9:1, Winter 2012), and Sugar Mule, a literary magazine. She is currently working on a novel.

“Then, bone by bone/ her low tide lips/ reveal the names…”
A Pacific climate change poem, by No’u Revilla.