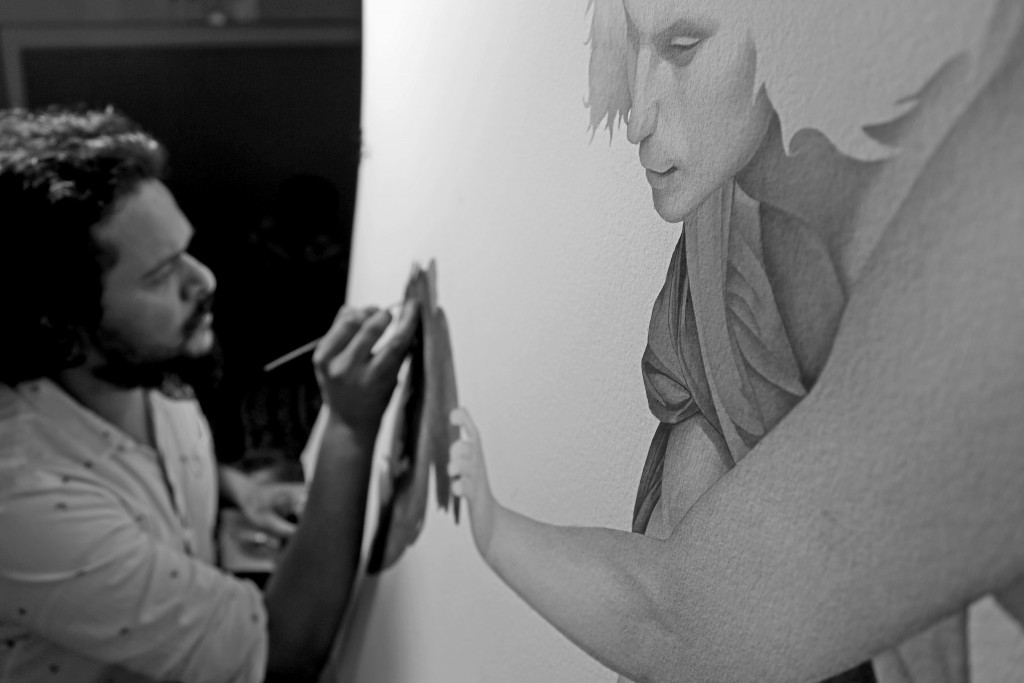 The artist in his studio. Image courtesy of Irfan Hasan. All rights reserved.

Born in Karachi, Pakistan in 1982, Irfan Hasan graduated from the National College of Lahore. The artist uses a technique that is derived from traditional Mughal miniature painting; mainly using opaque water colour on paper. The colours are prepared by producing a mixture of watercolours, zinc chalk and gum Arabic. Hasan’s method includes applying washes of colour onto paper and then rendering his images in with a sizeable brush, employing a method known as “Tapai “. This is then followed by “Pardakht”, the final finishing where he makes use of a three hair squirrel tail hair brush.

The artist has participated in various residencies nationally and internationally including VASL, “Art Omi” New York, Store Front Artist Project Massachusetts, U.S and GCAC, Kolkata. Irfan has previously been a part of the faculty at the prestigious Indus Valley School of Arts and Architecture, Karachi, Pakistan and is currently a visiting faculty member at National college of Arts Lahore. He has been the recipient of the “Best Young Painter Award” in 2007 and 2008 presented to him by the Punjab Arts Council, Lahore followed by the Commonwealth Foundation, England “Artists Residency Award” in 2010. He has held three solo shows in Pakistan and India and various group shows nationally and internationally. He currently lives and works in Lahore.

Here, he talks with The Missing Slate’s Shameen Arshad on his process and artwork.

Did you always want to be a painter?

Yes, I wanted to be a painter since childhood. I remember that I used to draw and paint religiously. Initially, my parents wanted me to be a doctor so I chose medical [courses] during my matriculation. I thoroughly enjoyed making the diagrams, but wasn’t interested in actually studying biology. I passed with good marks but when Intermediate [equivalent to the first two years of college] started, I confessed my lack of affinity to the subject. Around that time I realized that I am purely inclined towards fine arts. So finally after my intermediate in arts, I joined NCA.

What is a day in the life of Irfan Hasan like?

My day includes teaching at National College of Arts as well as working in my studio. I usually wake up late for college as I work on my pieces at night. I reach college at 10 am. From the moment I enter the class until [I leave], I am surrounded by students. Teaching is something I really enjoy. It is such a therapeutic activity. Around 3:30 or 4 pm I leave for my studio.

I have a habit of working daily. For the past two years I have been so busy with my shows and deadlines that I actually can’t afford a day off from work. It becomes terrible sometimes as well. The only time [I] am not working is when I am traveling. I am at my workstation from around 6 o’clock in the evening till late at night. I usually sleep at 2 or 3 am in the morning. During summer vacations my routine changes. I become quite the night person; sleeping all day and working till the wee hours of the night.

Apparently people think that it’s an easy job, but honestly being an artist is the toughest thing. Sometimes, I feel as if artists are like entertainers or jokers. They have to entertain the audience even if they don’t want to.
What ideas or themes lead to the conception of one of your pieces?

Well, it depends. My recent series of work has a very different idea than the previous ones. But all of my works have a very strong association with my personal life and surrounding.

There is a tremendous amount of detail in your work. How long would you say it takes you to make one of your paintings?

Well that obviously depends on the scale of the work. Sometimes it takes more than a month to create a piece. The maximum amount of time I’ve spent on a painting is two months.

What is the one thing that bothers you most about your profession?

I don’t face any such problem other than the psychological impact of pursuing such work. I think people in all creative fields face this issue. At some point of our career we go through extreme anxieties, frustrations and loneliness. Artists think differently, their ideas and imagination are usually different from rest of the society. It is actually tough to bring out all your creative energies onto a surface. It needs constant mental and physical engagement. Apparently people think that it’s an easy job, but honestly being an artist is the toughest thing. Sometimes, I feel as if artists are like entertainers or jokers. They have to entertain the audience even if they don’t want to.

What has been the best experience you have had so far while pursuing this line of work?

I was ecstatic when I saw my painting printed on billboards in Kolkata City. It was actually an invitation for the public for my solo in India.

How accepting are people of nudity in art in Pakistan?

I think people, to some extent, have acceptance for it. However, most of the mainstream galleries don’t encourage this practice. As you know Pakistan is becoming a terrorist state and religious extremism is spreading day by day in our society. It makes one afraid of being victimized. That’s why artists don’t show such works in public. Nevertheless, there are still some collectors and art lovers who have appreciation for nudes.

What is the most interesting reaction you have witnessed in relation to your work?

It was when I painted ‘The Guardian’ an image which had the head of a local politician (former Interior Minister, Rahman Malik) on a dog’s body. People found it very amusing. I wanted to display the painting in the gallery but they refused as they feared offend[ing] the PPP government. Nonetheless, I still got a very good response as the work is highly relatable. The piece got sold before the show.

Do you feel an art lobby exists?
They do exist and I think it’s good; the more lobbies we have, [the] more [the] art scene would flourish.

Which artist would you say is contributing highly to the art scene in Pakistan?
There are [a] number of artists who, not only nationally, but are also making waves internationally; Imran Qureshi, Rashid Rana, Waqas Khan and Khadim Ali are a few that come to mind.

Describe your art work in 3-5 words?
Flesh, form and madness.

What message would you like to give to aspiring artists?

The best advice one can give has already been articulated by the Father of our Nation which was “kaam kaam aur sirf kaam” [work, work, and only work]. I would give the same guidance to our upcoming talent.

Shameen Arshad is currently interning as Junior Art Editor for the magazine.

“When it got unbearable I went to the mountains to look for drama.” Story of the Week (September 4), by Zain Saeed.

"I see us as we were, a couple, standing in a wound.../Thin strips of heat peel off the gutted pavement..."...