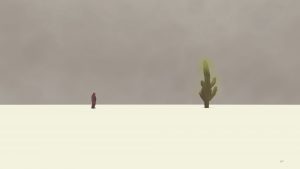 Billy Luck’s bones rearranged themselves on the bus headed out of Gibsonton for the Tampa train station. He looked out the window, away from his trailer, all rusted, awnin torn, bricks holdin down tarp over a portion of the roof, lookin like other junkyard leftovers from his carnival days.

The bus passed an old train car that jailed tigers, vines growin through it, a giant planter. Gibsonton was a has-been like him, still some carnies left but most dead, or dyin, or just plain up and left, like his good friend Daisy, the most beautiful woman his eyes ever seen, a midget, but perfect, no matter.

Now Billy’s friends all had bodies from the shoulders up: Judge Judy, and that good-lookin gal on The People’s Court. He always took to smart, in-your-face broads—don’t take no shit type—like Daisy, who called, askin him to come see her in Miami, cause she was dyin.

What a foul mouthed little mother she been, tough, had to be, no taller than three feet, perfect proportion, and a great pick-pocket, long as people was sittin down. She been with the Gerling since nineteen fifty, five years after Billy started workin the carnival, a legend, Daisy was.

He figured since she git religion, and was close to dyin, that she wanted to talk bout that night sixty-five years gone, somethin they never spoke bout, but it was there, danglin, an untouchable. So’s Billy wondered if she got that on her mind, bein religious and all.

The bus turned the corner and he saw the corpse of a high-striker. The black numbers erodin, the bell tarnished and hangin on by a bolt. He chuckled to himself at how the marks showed off for their ladies when they took the hammer and slammed it on the lever—suckers, all of em, not knowin that life in the midway was rigged.

Billy’s memories weathered inside his head like peelin wallpaper. The old days with freaks and geeks and nights where it was so damn excitin, pickin up, settin down, movin on and on until the midway was in sight and stakes hammered, where people in scanty towns ran out to watch, hopin to catch sight of the merry-go-round or the Ferris wheel settin up, maybe glimpse a hoochie-coochie babe runnin between trailers. Billy resented the fake imitation of amusement parks nowadays, though he was glad few had animals. In his day, he’d done seen too much bad done to the beasts, Billy done seen too much cruelty, period.

It reminded him of liquor. It went down real good in the moment but the more you drink the more blurred your vision for any good comin your way. He knew that from his daddy, the meanest son-of-a-bitch to walk the earth.

Drivin along the Hillsborough River, Billy pictured Daisy as she was when he first seen her. What separated her from other midgets wasn’t just her womanly child looks but her husky voice, almost like a norm and she could sing, too. That’s what saved her when she got caught stealin at Ringlings and had to work peepshows in the basements of tenements on the lower east side. Bein a midget wasn’t freak enough she was told by the boss, “What talents do ya got?” The curtain would open and Daisy would sing, struttin her little body on the platform while doin a striptease. Her singin saved her from fuckin God-knows-what, which she wasn’t above doin. Daisy’d do whatever to survive. She come across all innocent same as one of them dolls in the window at Woolworth’s, but if you looked long enough, you’d see lots a smarts and a cellar-full a hurts.

It was her husband, Jack, who told Billy this, who saw her in the slums and brought her to Gerling’s Traveling Carnival of Fun.

Billy’s clean flowered shirt stuck to the back of the vinyl seat like loose skin bout to pare off. He used to love the humid muggy days, but now it made him tired, like standin in line for hell. Most of the time he resisted goin down the road of the pity-pot. It reminded him of liquor. It went down real good in the moment but the more you drink the more blurred your vision for any good comin your way. He knew that from his daddy, the meanest son-of-a-bitch to walk the earth.

The bus traveled up the I-75, crossed the river and stopped in Progress Village pickin up several black men who looked as parched and worn as Billy now felt, then the bus sped north, where there was as many as four lanes. Billy sat up. He liked the breeze stealin in through the window, how it reminded him of that time his daddy got a job drivin a bread truck and took Billy along, that was the year before his brother died from havin his innards cut from the saw. They tried to stuff em back in, but Jimmy passed. Only time he ever seen his daddy cry, why, for a moment it ripped him apart, his Daddy’s sadness, so like his own.

He blamed Billy, though he was nowheres near the sawmill. Jimmy just plum forgit to put on the safety belt.

Thinkin bout his older brother always brought on the blues, how Billy missed him. The way Jimmy throwed himself on top of him and his mama when his daddy felt like beatin em.

The night Jimmy passed, his daddy got wasted and told Billy he’d a wished it was him that died instead. He was drunk, but Billy knowed he was tellin the truth.

At fifteen, he packed a bag and hitched a ride from Montgomery to Birmingham, decided to change his last name from Lock to Luck, cause God knows he needed some and joinin the carnival seemed a good pick. He carried his hurt deep, like Daisy’s, guess that was one reason he took to her so.

He peered through the grimy pane as the bus pulled into the station. His hand reached for the back of the seat in front of him, his heart pumpin, an adventure, no matter, and Daisy lay waitin, just for him.

DC DiamondopolousfictionHenry HuStory of the Week

“Theorem:/ we will liken our souls/ to a pair of winged horses.” Weekend poem, by Imogen Cassels.

"Gains can be reversed. It's 2017 and we're discussing voting rights again, after all." Rion Amilcar Scott in conversation with...