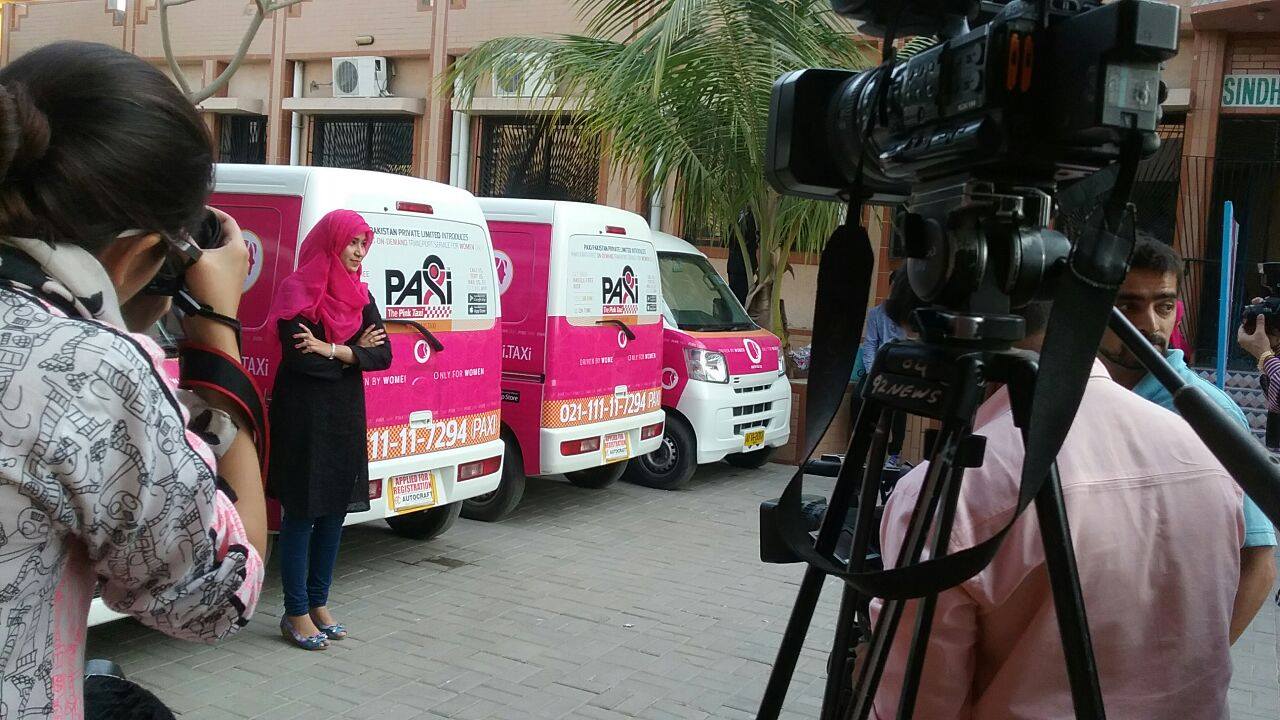 Lubna Khalid, the Senior Assignment Editor for ARY News, has some things to say about the public transport system in Pakistan.

“I’ve been working for about 18 years,” she tells me. “I’ve used them all. Buses. Rickshaws. Private pick and drop services. There was never a moment I felt at ease in any of them.”

Lubna is one of the thousands of working women of Pakistan who has had to develop incredibly thick skin to face her commute.

“You get in the car and the driver does the ‘strategic readjustment’ of his rearview mirror. You know he’s angled it to stare directly at you. And there’s not much you can do about it.”

“The buses have a huge men’s area and a small womens’ area. But the women’s area is still not a safe space, since men come in and sit there too.”

“Then there’s the issue of how chaotic it can be. You’ve got hordes of people shouting at the driver to stop at any random point on the road. In all the time I’ve used on public transport to get to work, I’ve never once reliably made it on time.”

Lubna’s voice is just one amongst many. For women like her, the very nascent Paxi service is a blessing from above.

The Pink Taxi service, with fully branded cars and drivers (what they call “pilots”) donned in smart, crisp uniforms of black shalwar kameez and pink scarves, is Pakistan’s first transport system catered by and for women. It launched in March 2017 in Karachi, and is already seeing an overwhelmingly positive response.

“Just now, before you called me, one of my neighbours saw this pink taxi and asked about it,” Lubna says. “I gave them their contact details and they say they’re going to use them too!”

“The oldest male we allow is twelve,” says Iqra Hameed, the head of marketing. Iqra is an enthusiastic and excitable person, eager to provide whatever detail I need over the phone.
“The idea came from Sheikh Zahid, who is the CEO of the company. Arif Khan is the COO. Both live outside Pakistan, and both have seen that there is are Pink Taxis in various parts of the world like Malaysia, Iran, UAE, the UK. So they thought, why not introduce one in Pakistan?”

The men behind the company are sympathetic to women’s troubles where public transport is concerned. It’s been argued that this may well be one of the most solid contributing factors holding women back , with regular catcalls, ‘accidental’ skin contact and sleazy comments being routine.

The company not only promises to tackle this issue, but also provdes incentives for women who want to join as drivers. “What we want for the company is good female drivers,” says Iqra — “polished women.” The company provides free driving lessons for all those who are recruited, self-defense training, first-aid training and communication training. “Let’s say someone refuses to pay. Let’s say they start groping the drivers if their windows are down, or try to open their door with force. We provide training on how to handle all of these situations.”

“This is a society that’s already quite conservative for women. To encourage people, in this context, to consider with an open mind that women, too, can be drivers–it’s a very, very, big task.”

The company has pilots who have work experience in Dubai and the UK, well-educated, from all around Karachi. Some of them are passionate about the cause, while others have been upfront about their reasons for joining, which is that they just needed a job.

Of course, pulling off this mission is no easy task. Not in a place like Pakistan where stigmas are hard-bound and remain uneroded through generations. I ask Iqra if the company has faced any challenges while trying to get things off the ground.

“We’ve not had any hurdles where the bike taxis and the vans are concerned — those are fine, as we are providing employment to young men, everyone’s happy. But when it comes to the pink taxi, it’s very difficult.” She echoes my sentiments, “this is a society that’s already quite conservative for women. To encourage people, in this context, to consider with an open mind that women, too, can be drivers–it’s a very, very, big task.” She explains how since recruitment started, they’ve drawn in 30 candidates. “In all the training, the sessions, and lessons, so many women walked out. We are now left with just 15.”

I wonder less about the women who come forward to these recruitment calls, and more about their families. How often have we heard the narrative of a woman being held back by her family’s narrow-minded demands?

“Lots of women were indeed held back,” Iqra says. “Some came in and they themselves found it uncomfortable and left. However, some convinced their families to come along to the office and verify it for themselves. We’ve had to reassure them that what we’re offering is perfectly safe, legitimate, and secure.”

“We’ve been working on this for 9 months,” she says. “We’ve had lots of time to sort out all these kinks.”

At the moment, the working hours for women is 7 am to 7 pm. The cars are already equipped with first aid kits and fire extinguishsers, but next on the agenda is CCTV. “Once we have those, we can offer a night service,” Iqra says.

One of the pink taxi pilots is Rubeena Naseem, who has been with the company for a couple of months, and is the regular pilot for Lubna. I ask her about her experiences venturing into this direction, and I am pleasantly surprised by her responses.

“I never faced any resistance on this at home.” She says. “My husband, my kids, everyone was supported — they all agreed it was for a great cause.  This stigma is baseless; we drive private cars anyway, don’t we? So why not a taxi?”

Rubeena has been Lubna’s regular driver for the past two months, ensuring daily pick and drop. “You can set your watch by her,” Lubna says. “There has never been any sort of incident of recklessness. A couple of times, there is so much traffic on the road that we have gotten into near-accidents — but she always applied the brakes expertly. She’s not gossipy, she’s not unnecessarily chatty. She simply does her work, and does it well.”

Rubeena had been living in the UK for years before this, where she held a number of jobs, but has been in Pakistan now for a while, where she has remained a housewife. This is her first time taking up a job after several years.

“Actually, I’ve always just enjoyed driving,” she says. “I saw their ad on Facebook and I got in touch with them. I was totally sold on their ideas. I just knew I wanted to be a part of this. This is the first time something like this was happening for us.”

She has one message for everyone: “This service has given women a peace of mind they had not known before. I urge everyone to avail the service.”

Pakistan isn’t known to be the friendliest towards women drivers. It is a place where inexorably sexist comments can form the fabric of daily conversation. “Alhamdullilah, I haven’t had to face much harassment so far though,” Rubeena says, “mostly, people have appreciated us.” Again: pleasant surprise. But then I realise, perhaps cynically, that this service has only been around for two months.  I want to see what’s in store.

It’s one of those things: we are constantly skeptical when it comes to our women. “Anytime a woman tries to do something for herself, she’s shut down in a hundred different ways,” says Iqra. “Our aim with this service, with the trainings we provide them, be they for driving, communication, or self-defense, is to break the stereotype. If we introduce exemplary female drivers — far better than the rash driving found in even the most seasoned public transport drivers — then this will be broken, won’t it? “

Rubeena seems optimistic as well. “Our society is becoming more aware,” she says. “People are definitely approaching us rapidly.” Indeed — it seems that, looking at the data, the Pink Taxi service has been getting 50-60 more calls each day that it’s in operation. With 15 pilots stationed around the city, each with the taxi parked at home, the company is striving to pick up the pace and meet growing demand.

The price of the service seems slightly steep, but still afforable for working professionals: Rs. 150 as the base fare, and Rs. 15/km. Business wise, the prices for rides cover car branding, unifroms, scarves, badges, medical kits, fire extinguishes, as well as accidental coverage for both the car and the driver. With all that in mind, it seems a fair price.

The company is growing. Right now, they have 30 bikes, 15 Pink Taxis, and 50 Paxi Taxis; they are planning to acquire more cars as the staff grows. Everything is rather recent: The company was launched on 8th March, the services were launched on the 26th March, and the Paxi Taxi was rolled out on the 1st of May. An app is available as well. Currently, passengers have the option of booking a cab via phone, SMS or flagging one down if they see it.

“We invited the transport minister to our inauguration ceremony,” Iqra explains. Good, I think — an exciting venture like this, in a city like Karachi, is sure to face myriad obstacles, ranging from the mafia to the local government. “He was very happy to support us, though. We’ve made news not only nationally but internationally. We haven’t yet faced any major roadblock of that sort. ”

The Pink Taxi service has a slogan: aaiye, baithiye, aur chaliye — come, sit, and let’s drive — which captures the ease of the process and the ethos of the company.

“I have not only handed out brochures to my entire office, but have also had my entire family hooked on to it,” says Lubna. “In fact, more and more of my neighbours are asking for their information.”

“This is a company that provides clean transport, ease of access, and a kind of mental peace that I haven’t accessed in years. What more can you ask for?”

The Paxi Taxi service plans to launch throughout all Pakistan, starting with Karachi, moving on to Lahore, and then onto the rest of the country. You can contact them at (021) 111 117 294, and find out more about them on their Facebook page here.

Ifra Asad is an editor at the magazine.

Remember when I said I wasn’t looking forward to watching Charlie Sheen’s Anger Management? Well I’m glad I didn’t oversell my enthusiasm on that….

"My beloved brought me a basket of Hachiya persimmons, orange-red and glowing..." Poem of the Week (24 May), by Susan...