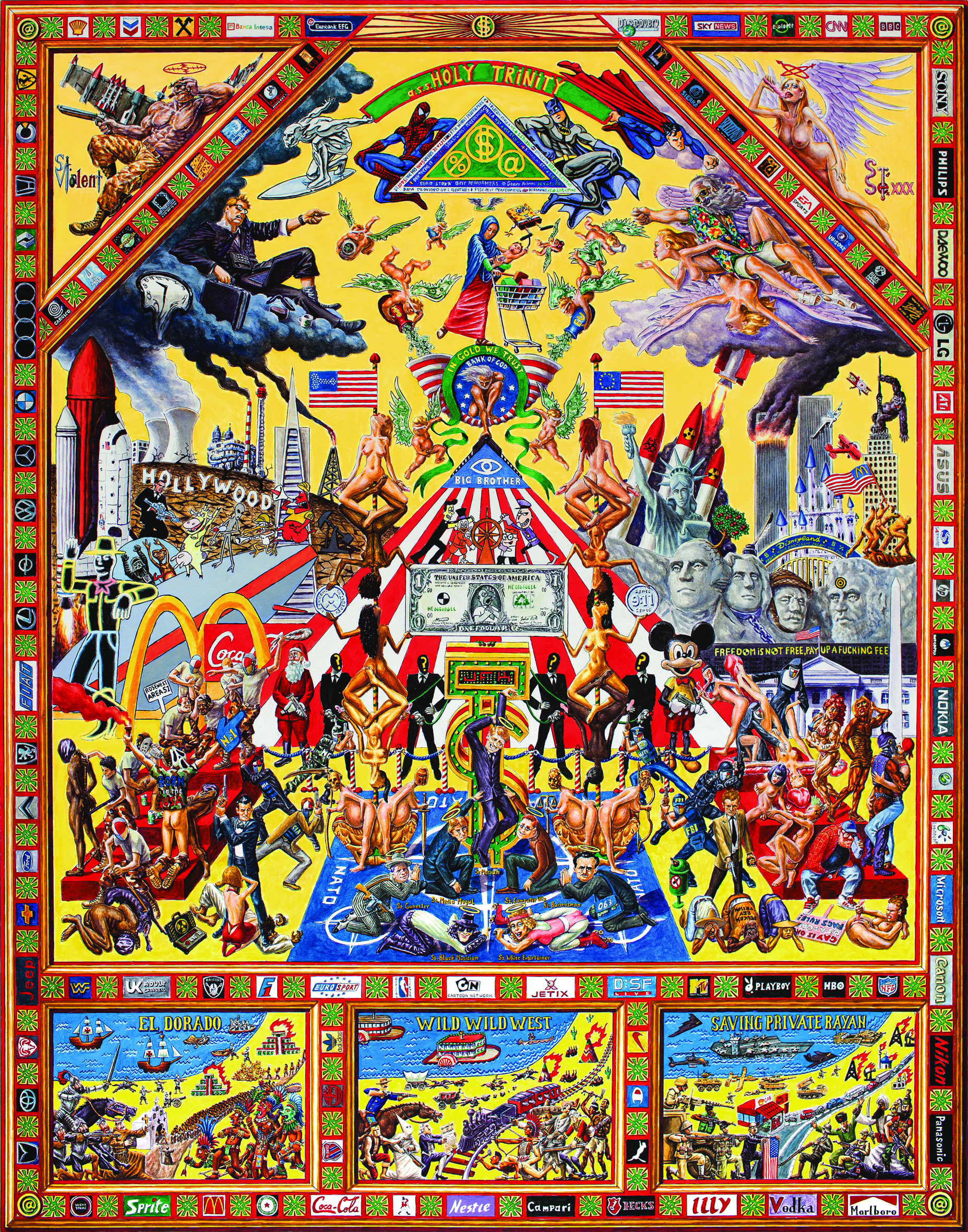 Iconostasis of Capitalism by Aleksandar Todorovic. Image courtesy of the artist.

Open immigration is not an American Value

By Constance A. Dunn

In January, a travel ban for Iraq, Syria, Libya, Sudan, Somalia, Iran and Yemen rocked the nation. It is now the beginning of March and that ban has been put on hold.

On the announcement of the ban, protesters flooded the airport, followed by lawyers offering pro-bono work to detained travelers, particularly legal resident green card holders. The ACLU (American Civil Liberties Union) filed a lawsuit against the federal government opposing the ban and won a temporary stay. The stay was issued by a federal judge. The DHS (Department of Homeland Security) chose to ignore the court order. All hell broke loose on social media channels. In early February 2017, a federal judge upheld the stay on the ban nationally and the DHS ceased its implementation of the executive order. But the Department of Justice is fighting on the new president’s behalf to appeal the federal court decision.

With the current travel ban, the detention of permanent residents and green card holders showed a real overstepping of power and a flagrant disregard for rule of law. In general, the use of executive orders to push through policy is a disturbing trend and a clear sign that our checks and balances on power are not working.

An unprecedented injustice has clearly been committed and a public reacted. So far, it looks like the public is winning. And why not? We are after all an upright country built on the hard work of immigrants going back many generations. We celebrate our rise to power as a nation of diverse individuality. We are America, the land of dreams and opportunity, founded on religious freedom. Sound familiar? No wonder, it’s the same rhetoric that has been used by politicians in every election, that has been passed down from parent to child, that resonates in classrooms. I’ve heard it so many times that I can regurgitate it here like an oft-repeated prayer.

Every four years, immigration is a key platform for candidates on all sides of the political spectrum. It is an emotional issue for many, but rarely do the proposed policies directly affect voters – in other words, a safe platform.

Long before I could ever vote, I was told the story of America as a nation of brave immigrants, beginning with the Puritans – Christian refugees seeking an end to their oppression as an unpopular sect in their native England and as foreigners in Holland. Americans as children are led to believe that our relatively “open” borders are unique in the world. That no other nation has been the safe haven that the United States has been to the poor and oppressed. That the march towards progress has been linear and ever productive with a handful of intrepid individuals leading the way.

At a recent protest I attended in Louisville, Kentucky, signs read “we are a nation of immigrants” and “our nation was built on immigrants.” The rally itself was called “A Rally for American Values.” But these values, like so much of the American Dream story, are clever marketing at best, propaganda at worst. The Statue of Liberty – the Nike swoosh of freedom — with Emma Lazarus’ poem ‘The New Colossus’ adorning its pedestal was, after all, a gift from the French.

Lazarus’ lines “Give me your tired, your poor/Your huddled masses yearning to breathe free” are often repeated in public discourse as representative of what America stands for and the decency that our country, unlike others, shows to new arrivals. However, the sentiment immortalized in the poem has never been reflected in law. Quite the contrary, immigration policy in the United States has always been prone to xenophobia and racism.

Give me your tired… your completely exhausted

As a superpower, we are in a constant state of war, one kind of war or another anyway. It’s no secret that the U.S. has fought proxy wars with other superpowers to protect its interests in resource-rich nations. But it is our interventionist political tactics in the name of democracy that have been devastating to our international reputation, to put it mildly. There is no question that we have put ourselves in real danger of reactionary violence and so we must keep the borders under control. But public opinion would have us accept the consequences of our intervention and at the very least take in those who’ve been rendered homeless by our actions. A sensible compromise from a legal point of view is immigration quotas.

The U.S. yearly quota for asylum visas is 85,000, broken down into individual quotas by region. There are far more than 85,000 asylum seekers applying every year, 620,000 applied in 2016 alone, meaning that asylum seekers are waylaid for years prior to being processed and vetted. Countries with an on-going war on their own soil aren’t particularly forthcoming with paperwork, and if your belongings, documents and family have all been lost or destroyed, this creates problems. One can assume that there are oversights, but for the most part, refugees have been through hell and back to get to the United States.

Beyond the vetting process, the DHS and customs can hold a non-citizen at the border for any reason, before and after the travel ban. Typically, people are held because officers suspect them of being dishonest about their stay length (in the case of a tourist visa), smuggling, trafficking or a suspected security threat. The methods used to determine nefarious activity are not hard science and rely mostly on logical reasoning and instinct, which makes human error inevitable. Innocent people of many faiths, origins, nationalities, and ethnic backgrounds have been held at the border for hours and/or questioned intensively. Some have been deported. In 2014, the Obama administration attempted to curtail profiling at borders, but border agents persist in questioning those they have identified as a risk by race and ethnicity. Since the passing of the Patriot Act and the creation of the DHS, even U.S. citizens are subjected to inspection at the border, including having information copied from their electronic devices.

Every four years, immigration is a key platform for candidates on all sides of the political spectrum. It is an emotional issue for many, but rarely do the proposed policies directly affect voters – in other words, a safe platform. It is a bipartisan issue and stringent immigration policy crosses party lines. It was Former President Bill Clinton’s 1996 laws on immigration that set the ball rolling on the current increase in deportation and detainment, while Former President Bush’s policies following 9/11 did the rest. With each violent attack or sensationalized story, it becomes easier to get a discriminatory policy past the public. But we as a citizenry chose this; it is a democracy.

“In general, creative writing needs rules and constraints, ways to more or less artificially limit the unlimited options available to the writer.” Jarkko Tontti talks to Camille Ralphs in the latest instalment of our Poet of the Month series.

To the West Ice