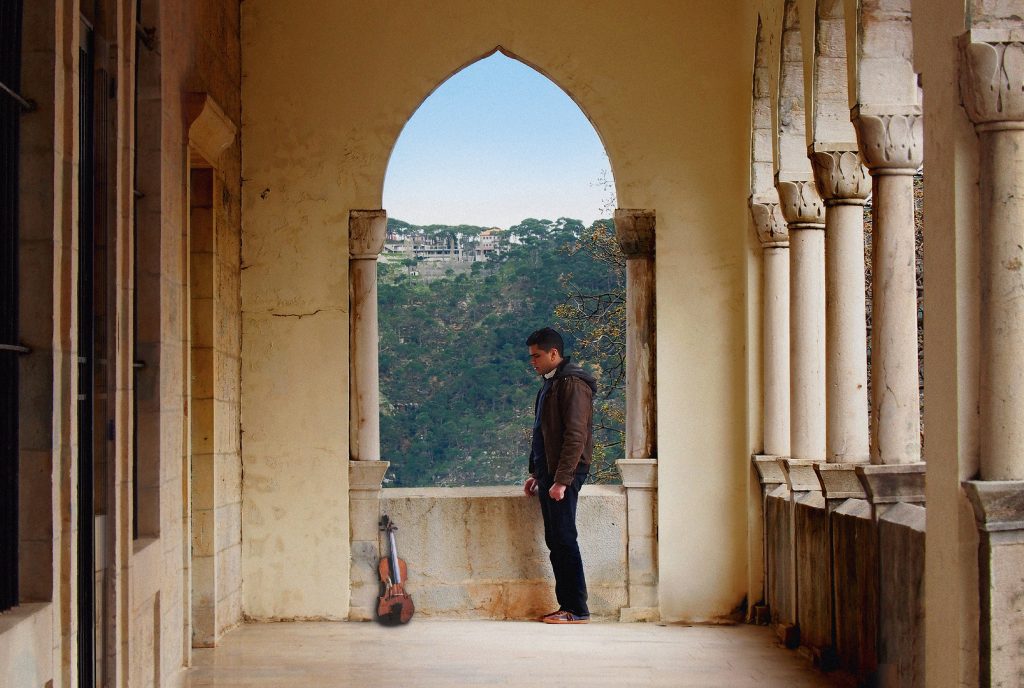 Photo courtesy of The Bureau Sales (2016)

Winner of the Grand Rail Audience Award at the 2016 Cannes Film Festival (where it premiered in the International Critics’ Week), Tramontane tackles weighty historical and political subject matter in ways that are occasionally moving but too often overly familiar. The Lebanese film (co-produced by French, Qatari, and Emirati companies) uses blindness as its central metaphor, not-too-subtly paralleling the literal blindness of its protagonist with the figurative blindness of a country still grappling with its turbulent recent history.

Rabih (Barakat Jabbour) is a blind musician and chorister in Beirut and part of a comfortably wealthy family. When his choir is invited to embark on a musical tour in Europe, Rabih visits the local government office to obtain his passport, only to be told that his ID card (which he’s carried for as long as he can remember) is a forgery. So begins a Sisyphean journey through bureaucratic red tape, as Rabih is told to go to the local hospital and retrieve his birth certificate. It isn’t terribly surprising, though, when he’s told that his records can’t be found—a not uncommon occurrence for those born in Lebanon in the late 1980s, at the tail end of the country’s long and violent civil war. The next step is to obtain a blood test from his mother Samar (Julia Kassar), whose birth certificate presumably can be located, but this is where the plot thickens: Samar is forced to confess that she cannot submit the blood test, as she is not in fact Rabih’s birth mother.

While the first part of the film resembles a dreary satire of the political hoops one has to jump through for the right to travel internationally, Tramontane at this point becomes a more pointed personal drama. Rabih’s blindness now extends to his identity, as his conception of who he is suddenly becomes shattered. Samar admits that Rabih was found as a baby in a war zone by his uncle Hisham (Toufic Barakat), though even this account seems dubious given the shady nature of Hisham, suggested through a tense interaction with an old “friend” on the streets of Beirut. Indeed, the more Rabih travels through remote areas of southern Lebanon, trying desperately to find his hometown or at least anyone who might have known his family, the more obscure and unknowable his past becomes.

[quote]Tramontane tackles weighty historical and political subject matter in ways that are occasionally moving but too often overly familiar.[/quote]

The implicit connection is to Lebanon’s past itself, as Tramontane’s writer-director Vatche Boulghourjian suggests that his adopted homeland (he was born in Kuwait) has been equally unable to reckon with its fractured history. Boulghourjian doesn’t allow the film to get very political, skirting any discussion of the internecine sectarian battles that led to Lebanon’s Civil War, and specifically of the “War of the Camps” in which Shi’ite militias attacked Palestinian refugee camps, during which Rabih was apparently orphaned. While Boulghourjian’s decision to make Tramontane more humanist and dramatic in nature than politically oriented is reasonable, it prevents the film’s allegorical subtexts from carrying much weight; his commentary on Lebanon’s past only skims the surface, and we come to understand the nation’s history about as much as we come to understand Rabih’s origins (which is to say, not much).

This might be the point, of course, as the film’s intentionally unsatisfying narrative closure correlates again to Rabih’s blindness and suggests that the past can never be fully understood. This is also formally conveyed through a dark visual palette (sometimes too dark) and an effective use of narrow depth of field to align us with Rabih’s limited perspective. But by emphasizing the murkiness of its political and historical subject matter, Tramontane mostly brings to mind previous movies that have covered similar territory in more audacious ways: for example, the biting commentary of Mohammad Rasoulof’s Goodbye (2011) or the ardent family drama of Philippe Aractingi’s Under the Bombs (2008).

As Boulghourjian’s feature debut (following a number of well-regarded short films), some of Tramontane’s more glaring flaws—most notably its messy narrative (which includes characters that are haphazardly introduced and subplots that are never resolved)—can be forgiven. His patient, introspective tone bodes well for future productions, especially if he is able to integrate personal drama with political allegory more effectively. But it must be admitted that Tramontane belongs not to its writer-director, but to its lead actor: this is Barakat Jabbour’s triumph, as he elevates Rabih above a mere metaphorical device and into a living, pained flesh-and-blood person. A talented musician in real life and blind since birth, Jabbour is hypnotic to watch, and his performance—restrained, yet forever on the verge of breaking out into anger—makes vivid the plight of someone searching for an identity they thought was so secure. Nowhere is this more poignant than in the lengthy musical interludes, in which we witness Rabih and his fellow musicians perform onstage. In these moments, we see joy and confidence radiate from the screen. If his past remains a stranger to him, Tramontane suggests, Rabih’s future as a self-made artist remains fully within his control.

“the things I long for are edited out of movies. maybe / they just exist, even less than perfection, like love// and rain…” Poem of the Week (April 14), by Carla Jones.

Like its predecessor, "Blade Runner 2049" is a stylistic triumph that offers less than meets the eye. Matt Levine reviews...