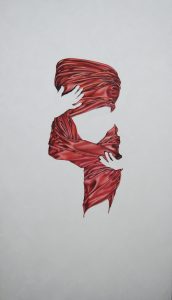 Species by Scherezade Junejo
Oil on canvas, 2017
Image courtesy of the artist

My father’s daughter is dead.

I know, because I buried her.

She lies at the bottom of a grave,
curled on her side. A little girl,
in a little blue dress, red ringlets tied in ribbons.

I shoveled soft, dark dirt on top of her.
Shovel, by shovel, by shovel.
First I covered her feet clad in hated red shoes,
then her ankles with white, perfectly folded socks.

Slowly, I worked my way up her legs,
over her belly to her chest.
I covered her outstretched hands,
her face, eyes open, mouth shut.

I stop. Dab my face with my shirttail, rub the small of my back with dirt darkened hands.

My mother’s daughter forgotten,
I knelt, as if in prayer,
planted
lilies, daffodils, roses, hollyhocks.

Melissa Rendlen has been a practicing Urgent Care physician for thirty-seven years. Recently she returned to her love of writing and has had poems published by GFT:Press, L’Ephemere, Indolent Books What Rough Beast, Ink in Thirds, Writing Raw, and Still Crazy as well as having been a Tupelo Press 30/30 poet and receiving an Honorable Mention with her first attempt at a chapbook by Concrete Wolf. Despite being thrilled with her success, she has kept her day job.

“Every time I shave, just above the legs,/ and reach the protruding bones/…. I, again/ hear the whistling of the wrecked train.” Weekend poem, by Mahtem Shiferraw.