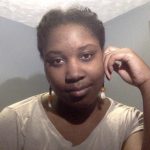 My aptitude for writing dates all the way back to the second grade when I wrote the following alliteration for a class assignment, Queen Quack Quits Quilting. Now why a seven or eight-year-old child was given one of the least-used letters in the English language, I will never understand. All I knew in that moment was that I could write anything I wanted. There is a power that comes with the ability to play with language.That kind of power has appealed to me ever since.

Unfortunately, there are certain narratives that are favored more than others. As a writer and editor of color, I desire to be a part of the current shift of narrative erasure as it pertains to issues of diversity in the literary world. When one has a marginalized voice, it is easy to marginalize one’s own voice. I actively challenge that notion in all writing, including my own.

Being able to see how people play with language is what excites me the most about being an editor. I am especially interested in literature from the African Diaspora.There are so many talented and unknown voices in the world and I want to help showcase some of those voices here at The Missing Slate. I look forward to this brand new journey as one of the fiction editors for The Missing Slate.