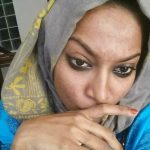 When I was little, I struggled with identity. If given a choice between a scream and silence, I’d pick the latter although I propelled myself from doing the former. But this is where clarity took root. Hearing a roar within the quiet, I gravitated towards an angle where you were able to hear a world that did not exist in reality but in the conscious. More importantly to address and understand that world, where the seeds bore fruit. I knew this was going to be a heartening journey; to provide it some form, some narrating and in order to do that, I had to lift a pen because to put it more sincerely, I didn’t want to remain silent neither did I want anyone to hear me, which was disobliging to the self.

Writing, for me thereon forth, became sort of a profound divulgence. I felt strongly. I observed sharply. I acknowledged gently. I made a mess, definitely. That’s good news. Because if the knot in the spool was left ignored then it meant that there was more searching to be done. That there was more writing to be done, more extricating necessary, more deducing to be tripped upon, tussled with, in identifying identity and then ultimately enduring clarity; the validity of it, pure and lasting — one that could be heard.