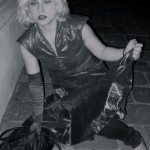 Oftentimes, when someone asks me where I grew up, I find myself wanting to say, “In my mind. In the words and works of people like Hesse, Márquez, and Borges. With loving characters from Andersen’s fairytales, in Dumas’ intrigue-filled foyers, among French and Spanish royalty.” And if the people asking the question were asking because they were actually curious about the influences that made me the person I am, that answer would be the most correct. Although not the most beneficial for me, I have to say. Reading Pearl Buck gave me the political views of someone living in 1960s China, Ann Golon’s historical novels made me adopt the moral values of 17th century French nobles, and going through the works of Miroslav Krleža made me speak like people in early 20th century Croatian high society.

In one word, I was completely delusional.

Going to an idealist, hippie boarding school, as you may imagine, did not help my case. After living in between worlds and cultures during my formative years, I grew up to be someone who thinks it’s O.K. to go around telling people they shouldn’t flush because it’s a waste of water, and believing that speaking to them in foreign languages they won’t understand will help them “get out of their comfort zone”. I had a vision of the world as one giant, incomprehensible melting pot where languages, cultures, and people will grow together and where we will all be comfortable with the confusion, aware of each other’s existence at all times.

Imagine my surprise then when I woke up from my idealism-induced psychosis and started using my precious critical analysis skills (the most valuable outcome of my overpriced liberal arts education) to figure out what kind of world I actually live in. I knew I needed a filter, a place that would allow my dreams to live on, whilst appearing (to a certain degree) normal to the outside world. That filter I found in The Missing Slate. I love reading works from all over the world, I love understanding — and not understanding even more — the words of those people, and most of all, I love being involved in the process of the magazine’s creation, and getting inspired along the way.

I write pieces embarrassingly real, yet absurdly fake, because they come from that hidden place inside me still believing in the world I grew up in. Perhaps one day that world will be reality. But more likely, it won’t. The record of me believing in that world will perhaps one day be a part of another unfortunate young idealist’s Utopia and knowing that is the thing which gives me the strength to keep on going, trying to be sane in the ultimately insane world.