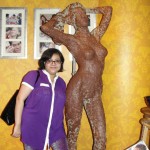 My whole life has been completely ordinary. Perhaps the only extraordinary thing about it was that at the age of six, inspired by Enid Blyton and The Arabian Nights, I declared my life’s purpose: to be a writer. Personally, I don’t see why people think it’s a remarkable achievement. Possibly, it’s because many of those people have never tasted my fantastic cooking or baked goodies.

I spent the majority of my life writing terrible poetry, even more terrible fiction, and don’t even get me started on the fanfiction. I wanted to write to make a difference, to bring people joy, to change the world, but couldn’t figure out how. At university, I thought I found my calling in journalism, but certain events resulted in a determination to drop out and give up writing altogether.

Then one day, my friend Maryam Piracha tweeted about how she dreamed of an assistant one day, who would bring her coffee and help her out. Out of affection, I responded, saying I’d love to be her assistant someday. The next thing I know, I actually am her assistant, and wondering what I’ve gotten myself into. But one TMS summer later, I had rediscovered, nay, reinvented myself. Since that fateful summer of 2011, life has been tumultuous but even at its bleakest, The Missing Slate was the light that never dimmed until I found my way back. In two years, I’ve developed as a writer, editor, and as a person. I’ve literally grown up in front of the TMS team, a feat for this particular spoiled little daddy’s girl!

What keeps me around The Missing Slate (aside from our beloved Maryam Piracha, that is)? Indubitably, it’s because its home to everyone, the outcasts, the rebels, the feminists, the atheists, the queers, the discriminated, the misunderstood; perhaps that’s why it continues to grow, in numbers as well as in fame. One day, copies of The Missing Slate will be in every home, eagerly awaited by all, and I want to be part of that collective effort which makes people’s faces light up in joy and say, “It’s the new issue of The Missing Slate, hurrah!”

Ghausia is also Junior Articles Editor for the magazine.