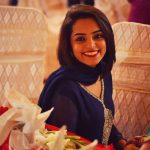 I have always been fascinated by how the mere arrangement of words can transform meaningless fragments into enthralling stories and revealing descriptions. My fascination with the words led me towards the path of reading. When I was in college, I would read every readable thing that I came in contact with, from the old discarded magazines to every kind of book. I would copy all my favourite sentences into a diary and later on, try and formulate similar sentences of my own.

When I entered university, I realized that I felt passionate about print journalism. I covered events and wrote news stories for my university daily. To this day, I continue doing so. However, during the course of my four years, I was never able to write even a single fictional piece, no matter how hard I tried. I still have several unfinished drafts, lying dormant somewhere on my computer. So, in order to satisfy my word-hunger, I began attending talks while occasionally organizing them myself.

When Maryam asked me to help TMS for its first open mic, in collaboration with the Muslim Writers Collective, I did not think twice before saying yes. There is nothing more blissful than having a bunch of literature enthusiasts, huddled together in one place while each of them tries to narrate a story of their own. Maybe this inexplicable ecstasy that I derive out of such gatherings is what keeps me going and maybe this is why The Missing Slate is closer to me more than my conscience perceives.