Finally we are here and guess who’s back in town.

Trial day is here and the girls still need to convince Emily that Paige may be the one who murdered Maya. Aria wears an electric blue skirt, Spencer one-ups her with donkeys on her shirt, but no amount of crazy wardrobe choices are enough to distract her from the intervention the Liars try to power through. The earring isn’t enough to change her mind, but at this point both sides are pretty stubborn about their points of view and nothing short of a kidnapping-death-friends as collateral damage  is going to achieve that.

Feeling exceptionally harrased not just by her friends, but also the reporters who have set up camp on her lawn, Emily decides to un-plug and head to the woods with Nate so they can peacefully reminisce about Maya. Clearly all the time spent getting glass out of one’s hair is bound to cut into one’s movie watching time. Only Spencer’s got the multitasking bit down. Emily’s mother makes some valid points about leaving town with people you’ve met only a few weeks ago considering two girls (your loves) have died mysteriously in Rosewood, but Emily is past listening and ready to be a big girl who makes her own bad decisions.

But before we delve into how the woods have been nothing but TERRIBLE juju for the girls, let us look into how many carbs Ezra has consumed this season, from sandwiches to bagels to two cakes, our resident Poor Little Rich Author Pedo Man-Child has had been building his strength to take on the challenges of being on the A-Team’s hit list. Oh! that’s right, Ezra (more like Aria’s loved ones) has barely ever been on A’s radar, hasn’t he? His ex-knocked-up-teenage-girlfriend-paid-by-his-mother-to-abort-fetus-Fitz is normal, well-adjusted and getting along “spectacularly” well with his too-young-to-be-legal-current-girlfriend, no lives have been ruined by the mere existence of blissfully-unaware Ezra who is both literally and figuratively having his cake and eating it too.

In the real world, i.e. Rosewood and it’s constituent The Radley Insane Assylum, the boys, the girls and the freaks in the middle are responding to the A-Team signal. Everyone’s been briefed, Garret’s trial means all hands on deck, being comitted is no excuse for not pulling your weight. And so Mona, darling of bad-assery Mona, dons on her nurse’s costume and walks out of thier like she’s going to do her grocery shopping for the week.

While Spencer preps for the big day by losing her V-card to the Dalai Lama of Rosewood, Hanna and Rosewood’s former resident hobo argue about the utility of bringing a gun to a knife fight. Hanna thinks she’s won the fight, but hobo habits die hard and Hanna cries the saddest I-TOLD-YOU-SO. But I’m getting ahead of myself.

Far away from civilization, Emily recieves a call from the Ghost of A’s Past asking her to kindly vacate the premises. Obviously Emily first looks for Nate to ask for his permission, and when she can’t find him rummages through his bag and finds a sealed envelop addressed to Emily which he was possibly holding for a special occasion (or using it to locate her). Emily tries to escape, but Nate had spent months planning this evening, home videos and a special present just for her. 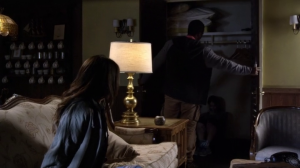 So only when Emily is absolutely sure London James (a.k.a Nate) has another lesbian to keep him company does she make a run for it.

Having been summoned to Allie’s grave to hand over Maya’s bag in exchange for not being framed for robbing her grave, the Liars once again reconsider the decision to not have had planted GPS chips into each other’s teeth or letting their parents know somebody is bullying them again. Grave watching isn’t all it’s been cracked up to be and after a few anxious hours the Liars realise they’ve been successfully distracted and diverted while Emily is alone with Maya’s killer. As the girls and their bodyguard (Caleb) head to two different lighthouse cabing getaways, Mona informs her teammate about a change of plans. She isn’t entirely pleased though.

London finds Emily in her super-safe hiding place all the way up in the lighthouse and a fight to death ensues. Emily’s had a shit year and she’s just found out she made out with Maya’s killer and he was keeping Paige in a closet she had worked so hard to come out of, so her tolerance level is hovering below “OH HELLL NO!”. And since London brought a knife to the fight, he gets stabbed with a knife. Caleb manages to locate Em through the halo she is emitting from the lighthouse. Liars don’t need others to come fight their fights for them, just someone to hold them and assure them that everything’s going to be ok; but to also remind them that their loved ones are never truly safe, especially if they carry a loaded gun on them.

The Liars find themselves once again in a position they keep trying to get themselves out of. They’ve trusted the wrong people, they’ve failed to protect the ones they love. As Emily’s impatience to hurry over to Hanna to console her grows, Paige once again steps up because she’s so finely attuned to Emily’s needs. Spencer finally understands Paige and nods an apology at her.

In way of unexpected communications, while the Liars wait for Caleb at the hospital they recieve a call from ” A” thanking them for helping poor innocent Garret not get convicted for a murder he did not commit and there he is smiling his smarmy smile and the girls sink deeper into a pit of despair.

Mona walks back to Radley complaining to her teammate about how Nate wasted her time, but is able to see the bigger picture as always because she’s a genius with great taste. Before she walks back in, she’s got a few more instructions she needs her teammate to take care of, removing incriminating evidence from Paige’s bag. The A-team if not dedicated and acutely aware of how time sensitive their operation is and so the black hoodie turns around to scurry off to complete his task and…

…And all over the world, you could hear the clinks of teenager hearts breaking like fine china.

Currently making a chart of how Aria’s relationships stand with regards to age. Her mother and she are dating people almost the same age and her boyfriend’s son is exactly half her age. It’s an interesting graph.

“What others see of us and vice versa is often the result of a great and ongoing internal struggle to appear consistent.” Zino Asalor, our December Author of the Month, talks to Haseeb Ali Chishti.