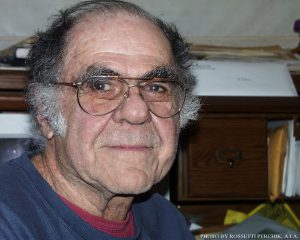 Simon Perchik, born 1923 in Paterson, New Jersey, worked as an attorney for 30 years before retiring to write full time. Known for his abstract, non-narrative style of poetry, his work has appeared in more than 20 books, as well as The New Yorker, Poetry and The Nation. Dubbed by Library Journal as “the most widely published unknown poet in America,” Perchik talks to Julie Haasova in our latest Poet of the Month interview about technique, rhyme and working the subconscious.

In your essay ‘Magic, Illusion and Other Realities’ you speak about the spectrum of writing which ranges from prose to poetry, and you suggest that this spectrum is one that fiction writers move back and forth along. You say that poetry is “words that inform the reader of that which cannot be articulated” and a characteristic of your poems is that they are strictly non-narrative, personal and open to interpretation. Did you always write poetry in this way or have you progressed through several styles? I’m also interested to know what brought you to writing and why you pursue it.

Like everyone else going to public school in the 30s I was told that a poem had to rhyme so that’s how I wrote. It wasn’t till the late 40s in college I learned that a poem doesn’t have to rhyme. I try not to use rhyme. I was freed from that limitation I felt I could forgo much of the other hallmarks of poetry such as poetic language, narrative, non-personal themes. The abstraction came fairly late. Working in the subconscious was always there, I think. Regarding why I write, that’s a question I have no answer for. And if I did know the answer I’m sure it would not give anyone joy. I write, as best I can tell, out of fear. What that fear is, is something I don’t want to think too much about. I’d also like to add that I have nothing but doubts about what I’m doing and how I do it. So, you and your readers should read my answers with some hesitation. It could be I have it all wrong.

You were born in Paterson, NJ, but moved to New York for college and still live there now. How would you compare the two locations in terms of how they influence your writing? Do you feel any connection to poets who came from Paterson like William Carlos Williams or Allen Ginsberg?

Though I was born in Paterson I never met Ginsberg. Same for William Carlos Williams. In those days, I was just waiting to get drafted into World War Two. Must add that though Ginsburg is not my cup of tea, I owe a lot to WCW. From him I learned to use the vernacular, not use the phony poetic language in poems we were offered in public school. Honesty took a step up in WCW’s poetry.

Some words, such as “lips” “hands” and “stone” recur in your poems. Are there particular phenomena or types of language that you find yourself repeatedly returning to in your writing?

Yes, just as you found, I do repeat those words and no matter where a poem starts out it ends in a graveyard. That’s something I can’t help. I have a great story to tell you about my use of “hands”. I was lucky enough to have my first collection reviewed in Poetry. The review mentioned my obsession with “hands”. I thought he reviewed a different book. I wasn’t even aware I used the word “hand” let alone that I might be obsessed with it. But there it was, over and over and over. I’ve gotten over the frequent use of “hands” but I use “stone” a lot now – I just can’t help it.

What’s new is a locution I picked up these last few years, through which I can go from “0 to 90” in four words. By “0 to 90” I’m referring to a technique used by writers to increase tension in a poem. Some poets can write lines that cover a lot of ground in very few words. Breathtaking could be another way to describe it. The “0 to 90” is actually something I stole mostly from Vicente Aleixandre, and you too might find it when reading his work. Here is an example I chose from a poem called “My Voice” as translated by Willis Barnstone and David Garrison in A Bird of Paper:

I was born one summer night
between two pauses. Speak to me. I hear you
I was born. If only you could see what agony
is in the early moon

I like that. I’m not sure I have it down pat yet, but I believe that tension is essential to poetry and one way to acquire it is to tighten the line so that it moves at a speed you want. Of course, tension can be acquired in many ways, but I’ve been especially drawn to Aleixandre.

The subconscious is a gold mine, all you need is a pen in your hand.

I’m interested in your opinion on the intersection of poetry with other art forms. The ideas for your poems come from photographs, and you compare poetry to music in that both elicit emotion without necessarily having a meaning. Could you please explain further how these three art forms – poetry, photography and music – interact in your mind?

Interaction is the key word here. It’s how an idea or image conflicts with a different idea or image from another art form. The process of reconciling those two seemingly conflicting ideas is what gives rise to a new idea. That’s what a metaphor does for a living. Music plays no part in this process except as a model of what the finished poem should be like: to inform the listener/reader of that which cannot be articulated. That’s where poetry gets its power. To evoke an emotion that you cannot find the cause of anywhere on the page.

What about the relationship between poetry and law? As an attorney, you were trained to reconcile disparate views; a method you now employ in your writing, even though you only started writing poetry professionally once you retired. Could you say more about that?

Good point. It wasn’t till after 30 years of law practice that I retired. I did very little writing during that time, and it was mostly during vacations. I couldn’t mix the law with writing. But once I retired I devoted all my time to writing. And from that the writing itself evolved into the abstract, personal, non-narrative poetry I write now. The evolution was slow but steady, more and more abstract, more and more working the unconscious. I feel strongly that any idea too close to the surface has already been picked over. It’s sure to be a cliché. The subconscious is a gold mine, all you need is a pen in your hand.

A SHEvolution is Coming in Saudi Arabia

"It is clear that the country’s situation is in a state of conflict, wherein the burden of centuries old customs are...