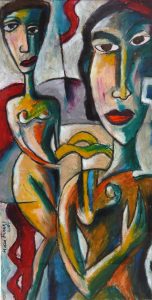 It was the middle of June: hot, shiverless, the fields already thick with wheat. I was spending the summer at my grandparent’s little wooden house, deep in the Masovian countryside. It was my first time back since I was a child, six, maybe seven years old. Most of my days were just empty sweaty spaces. I helped around the homestead, lay in the cool tall grass beside the grazing cows and painted the sky. I wanted to be a painter, I wanted to be wide and unforgettable. I lazed through the slowness of the country. I liked to learn how to churn milk to butter, I liked to watch my grandmother walk out at the break of dawn, and sing her songs to bluebirds. But I also wanted motion; I longed for change and excitement.

The village called my grandmother a witch but I never believed them. My grandfather had white short hair; he was mute and wrinkled. They made him do terrible things in the war and it took his voice away, my grandmother told me. I never asked for more. I heard enough about war. My grandmother looked like a Jew, they told her when Gestapo dragged her to prison and interrogated her. Luckily her mother was German and she too spoke a little Deutsch. Baba survived. Sometimes she says she could have gone mute too, that she’d like to go mute, but that there are things to be said in life and one must be pragmatic. Baba was always pragmatic. One ought to be the backbone of this family, she would often say. Baba was always the backbone.

She would come and visit us in our pre-war apartment in Warsaw. Every time she came she brought a small jar of dirt from the countryside, which she would sprinkle in the corners of our house when my father wasn’t looking. Dirt is sacred, she would mutter to me as I watched, one must always be faithful to it, cherish it. My father was a cool tall man, and he always extended that coolness to Baba. I never knew what happened between them to make their interactions so. My mother was my source of direction, my compass; I loved her and hated her, and felt the intensity of our relationship down to my bones. Both of my parents were scientists studying arctic tundra. They would often leave on month-long trips aboard helicopters and ships to return with photographs, seashells, stories. Their most recent trip was an unexpected one. Communities in Northern Siberia had been hearing a low-pitched ringing sound in the snowy arctic, which persisted for months. So, my parents were summoned to investigate this strange occurrence. I was to be left with Baba for the whole month of June and maybe July.

I woke up to an unusual commotion about the house. I rolled over in my bed and felt wetness against my thighs. It felt like the house was shaking, jars clinked on the shelves just above my bed. Baba’s prewar country house was made of wood, it stood tucked between apple orchards, sunflower fields and a small, still lake. There wasn’t running water or electricity till five years ago when grandpa’s back gave out and he could no longer haul buckets of water from the well. My room used to be a storage room for the various jars of preserves Baba made–sour cabbage, pickles, marmalade–before it was converted to a minimalist-style bedroom.

Someone slammed the front door. A car engine started.

I looked down and there was blood: thick, red, punctual.

The village called my grandmother a witch but I never believed them.

I slipped from the bed and dug through my suitcase for a pad. But the blood had already soaked through white sheets and into the mattress.

“I cannot believe this, I really can’t–” Baba’s voice came through the closed door. Then the sound of glass breaking.

I’d take care of the sheets later. I threw on a t-shirt and a pair of shorts. What was happening? There hasn’t been this much commotion in the house since I’ve been here. I could hear a female voice I did not recognize consoling my grandmother, and my grandfather’s short footsteps pacing across the wooden floor of the main room. I pushed open the door of my bedroom.

My grandmother was sitting on the couch, hunched over with her face buried in her hands. The woman–light blonde hair, creased tanned face–sat beside Baba, softly patting her back. My grandfather paced, back and forth, across the creaking floorboards in a kind of semicircle. It will be okay was written on his pad of paper, which he used to communicate when a simple expression or gesture did not suffice. He noticed me, and snapped his fingers. Something he often did to get someone’s attention.

One of the glass doors of the kitchen cabinet was broken, its jagged pieces shone on the floor.

I looked to the woman, who added sympathetically, “they’re making abortion illegal, with no exceptions–not for incest, rape, minors, or life threatening birth, nothing.”

I had no idea what any of this meant. I knew about the conservative party, which came into power last fall. I knew my parents didn’t want them to win, nor did most of our family friends. My friend, Alexandra, had an abortion last year, when we were both sixteen. She said her mother went with her to Germany because that’s where those things had–or could– be done. Alexandra said it felt like her vagina was scraped raw. After a few days she was back at school, once again looking at university applications, excited with the possibility of studying literature like she always wanted. I wasn’t sure what a miscarriage was, I’d heard of them. It usually involved a woman crying a lot, and being sad for a long time. I wasn’t sure why anyone would cry over something that wasn’t even born yet.

“If you revel in the uncanny, this is a collection you will not want to miss.” Sauleha Kamal reviews ‘The Age of Blight’, by Kristine Ong Muslim.

"By trying to make the female nude a part of our visual language, I am attempting to dispel the myth...