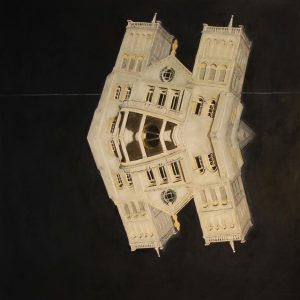 the tablecloth is gold
her dress is a black night blowing bright red hibiscus
across her urohs*
silver stars glitter on and off across the square of her neckline
she asks softly if she could have some of the piles of plastic bags
I’ve brought home from Payless
I say yes thinking
she needs them
for garbage liners,
to carry bananas and tins of tuna,
store trinkets
she says I send these home to my island in Chuuk
I ask what is the name of your island
she tells me a name that I quickly forget because I can’t pronounce it
she says my people they use the bags to carry their things
when they go to the store to buy food
because the ocean has crashed once more into the land
flooded the taro fields
they have no food
it will take two years for the salt to return to the ocean
and the garden become good again to grow taro
they are starving
I think nobody knows
nobody cares
because they are just a handful of people
living on an atoll being washed away by the ocean
all the henry kissingers of the world saying “who gives a damn!”
I am sending them money too she says
because they don’t have money
they don’t need money
they grow taro and go fishing and grow bananas and some vegetables
but they need money now to buy food at the store
because the ocean has flooded everything
How far is the store?
I think a mile or two
she says no, no, no they walk and walk and walk then they ride a boat
or go by a canoe
to go to the store to buy food
they go from morning till late at night
because their taro fields are washed away
by the hungry sea
they are hungry
her mother her uncles her cousins
I say take all the bags
someone says to me but then you’ll have all those bags
ending up in the ocean
the hungry ocean
the hungry people
my caregiver’s soft voice telling me a story
I’ve never heard before.
~ Evelyn Flores

Evelyn Flores is an associate professor of English at the University of Guam. She specializes in Pacific Island, Ethnic, and late 19th-century American Literatures from a Postcolonial and Indigenous theoretical perspective. Her research and creative activities are dedicated to preserving and publishing the stories of the Native peoples of Guam particularly but also of the broader geographic area of Micronesia. She is one of two editors of ‘An Anthology of Indigenous Literatures from Micronesia’, published by University of Hawai‘i Press to be released September 2018. As reports of the problems of rising sea levels increase and as the militarization of Guam intensifies, her attention as a scholar and writer has turned to how literature can insert itself to make a difference in the discussions and the outcomes.

"Become more than a wave or a grain of sand for others to step on..." A Pacific climate change poem,...