Michelle’s finally settling into her new home, getting all her stuff moved in, becoming comfortable in her own place. Except she gets a little too comfortable without the privacy curtains allow and Fanny teaches young, impressionable children; so this happens. 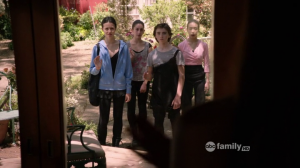 Joffery auditions are this week and Paradise has been hosting them for years. But a fax from Joffery all but confirms the probablity of shifting the auditions to Ojai (where people wear slippers and eat mushrooms) and Fanny is not taking the news well. 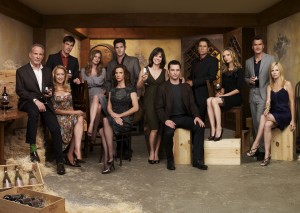 Initially Michelle doesn’t understand what the “fuss” is all about; the girls can still go and audition; and if Fanny is so adamant about hosting the auditions in Paradise why doesn’t she just get the floor fixed? The exasperation that seems to be Fanny’s only answer is indication Michelle is still an outsider. Somebody who needs to be told these things, someone who doesn’t already know. Truly is kind enough to come help Michelle fix her home and break it down for her. Fanny’s entire existence, her identity are defined by the dance studio. It’s been her pride and joy; and now when everything’s been taken away from her (her son, her home in essence), it is the only thing she has left. Hosting these auditions mean everything to her; since Michelle is “responsible” for much of what has happened to Fanny, she makes it her mission to have her floor boards fixed in time to have her host the auditions. And when Michelle makes something her mission there’s no stopping her, ’til it gets done. 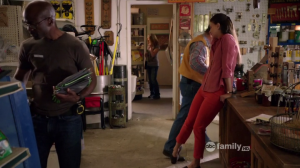 She tries to seduce them, dressed like THAT! Oh Michelle

Fanny finally accepts Michelle’s help, showing  Michelle how it’s really done. It’s a teaching experience for Fanny, although she does have to take Michelle to another town to get it done.

This week, only Boo and Sasha get featured since these two were the only ones auditioning for Joffery’s summer program; and also because both of them are representative of the larger theme of the ballet world. While Boo is sticking to a very strict regiment following up to the auditions, we barely see Sasha make any extra efforts. But she does feel bad about lashing out at Boo last week, and tries to make up for it. Initially Boo isn’t interested, but when she finds out her mother doesn’t think she will qualify and has had a cake baked offering condolences instead of congratulating her, she opens up to Sasha about it. Sasha uses this opportunity to get back in Boo’s good graces, buying her new pointe shoes; because she is the most forgiving out of the girls and probably willing to give Sash multiple second chances.

While Boo strrugles to get noticed during her auditions, it is implied that Sasha coasted through hers, but Boo isn’t very depressed about losing out. Although her mother may not have had complete faith in her, Fanny did; and even though she did not get selected, she did get some positive feedback from the judges and her self-confidence has been restored.

The many looks of Boo

“A model of how a blog can add value to a mainstream publication by doing something eccentric and focused, something with a life and a coherence of its own.”
Robert Cottrell on Adam Kirsch’s Daf Yomi blog.

Ming gets a storyline this year, integrating her more into the fabric of the show. We're also introduced to the...