In return of the “Awful Fathers of Rosewood”, this week Allison’s father makes an appearance. It may be hard for some to point out exactly why he belongs in the Awful Father’s Club, but may I remind you he raised both Allison and Jason, so clearly he’s had the most lasting impact of awfulness amongst all the other contenders.

Officer Creepy is once again making house-calls to the Marin household, to threaten Hanna some and then have her mom sleep with him and make it all go away. Except she’s away on some conference and he has to make do with threatening Hanna with eye witnesses and the possibility of the blood on the bracelet matching hers. And then he has to slink away all frustrated and what not (bet he thought, “what a waste, should’ve called in first.”). Now that Garett’s case has been dismissed, Spencer’s mom can defend the girls again and her first order of business is to get the court order for Hanna’s blood dismissed. Until that happens though, “A” flexes his/her muscles to show Hanna how easy it is for “A” to get her blood if she wanted it. 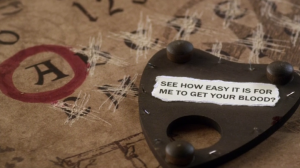 Don’t we know it

Toby’s getting suspicious again about being stuck with baby-sitting duties with Hanna last week, but the only answer Spencer is able to give him is that she was out with Jason looking for the bracelet which was submitted as evidence. Clearly Toby knows how incest works, so he’s just a tab bit suspicious about why that needed to be a secret from him (We feel ya Toby, they gots some weird vibes). I’m not too sure why Spencer hiding information from Toby, pretty sure the liars don’t remember for sure any more either (except for the threat of violence against their loved ones), but it’s a tough hole for them to dig themselves out of.

With Garett out and the parents back home, Jason has a relapse; gets wasted and gets behind the wheels like the good ol’ days. Spencer is thankfully there to help him out of his trashed car and drive him back home, our current expert on perjury, she enlists Toby to do the same (begrudgingly though).

I’m beginning to feel as if Emily’s being left behind in this race to be crowned Queen of Badassery by the other liars. Spencer was in the lead, but Hanna and Aria are catching up with their sneaking into hospitals, photo studios and now the insane assylum. As we know, nothing is random in the Rosewood universe, hence the tweezer Mona siphoned off Hanna a few weeks ago helps her escape into the now defunct children’s ward. If Mona wasn’t as young as she is, I would’ve guessed this wasn’t her first time in that ward; but maybe she’s been sneaking off to meet with the Red-Coat there. She can’t speak openly since Aria’s hovering, but she does manage to pass on messages to Hanna in code, and give me goosebumps that lasted a week.

Back to Emily, stuck helping Nate buy gifts for Jenna and warding off his not-so-subtle flirtation attempts at her. Her attempt at telling him about Garett and Jenna backfire as he becomes even more protective of Jenna. She doesn’t even make the threatening phone call to Jenna, telling her to back off from her man (UGH), that honor goes to Cece. An older version of Allison, whom she was also friends with and perhaps the person she modelled herself after. Jason’s ex too, but for now that’s all we know. Probably more to see in the weeks to come.

So Maya’s got a website and Mona knew about it. Pretty clearly a damn good reason for all of us to reconsider our digital footprint you guys. People are watching, NEVER FORGET!

Spoiler Alert: If you haven't seen "Dead Freight" yet, don't read this review. There is the occasional fleeting moment where...