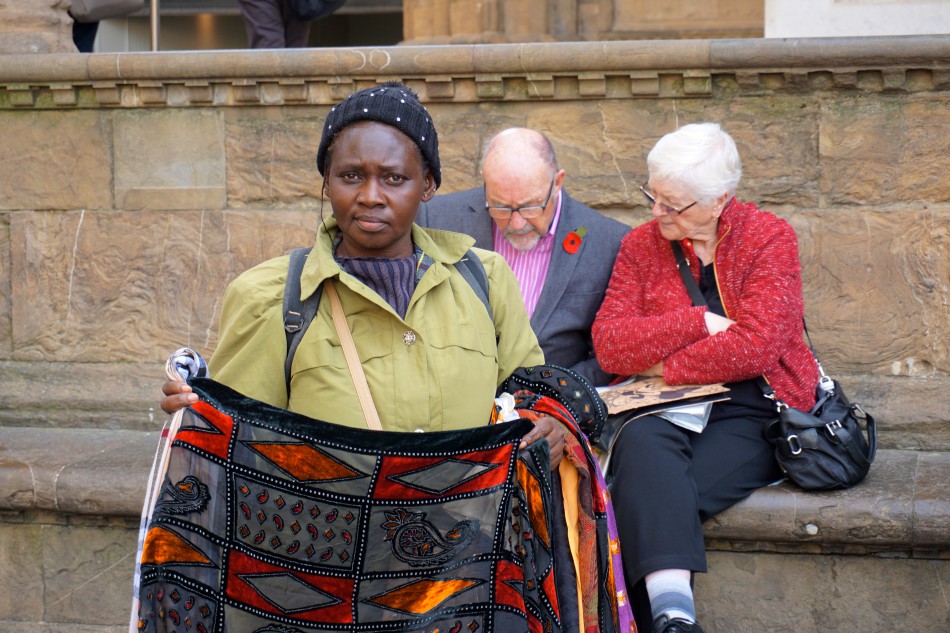 Florence, 2014 by Mark Wyatt. Image courtesy of the artist.

here is, in some literary circles, a notion that all writing is political. Literature as a means to alter a view towards the world, to confirm a belief, or to prove a point – all in order to affect the way in which the reader interacts with other people and their own self. But art’s power to inspire change in society has always been contested. W.H. Auden famously wrote that poetry “makes nothing happen,” while also acknowledging that it is certainly “a way of happening.” [1] At the very least, like all art, writing, and in this case, poetry, catalogs the zeitgeist and prevailing culture of the era, whether by reflecting such norms and trends (both literary and lifestyle-wise) or retorting them.

Wheatley was the first female black American poet to have work published, and despite her eventual emancipation, was still a slave when her collection was first printed, and Dunbar-Nelson, a Harlem Renaissance writer perhaps better known for her prose, lived during an era defined by terms such as the “New Negro” and by the desire for further equalization.

Under this definition, the poetry of two black American female poets, Phillis Wheatley and Alice Dunbar-Nelson, are both, if not political statements, records of the politics of their time. Their works offer insights into American society, revealing the differences in attitudes towards race and gender between Wheatley’s time in colonial America and Dunbar-Nelson’s era in the 1920. This is a reflection on how these differing mindsets manifest themselves in the works of these writers in numerous ways, from imagery and metaphor to the lack of particular themes, from whose absence conclusions can be inferred.

Of course, to mention and compare these poetic devices without acknowledging the literary conventions of Wheatley and Dunbar-Nelson’s times would be to ignore a major reason for stylistic differences. However, such trends are also indicative of societal ones at large: after all, art is not created in a vacuum. And the personal experiences of Wheatley and Dunbar-Nelson undoubtedly informed their works in a way that only being a victim of discrimination can: Wheatley was the first female black American poet to have work published, and despite her eventual emancipation, was still a slave when her collection was first printed, and Dunbar-Nelson, a Harlem Renaissance writer perhaps better known for her prose, lived during an era defined by terms such as the “New Negro” and by the desire for further equalization.

It is through this lens that Wheatley and Dunbar-Nelson’s works must be viewed.  Both of their works represent the events of their surrounding environments while also invoking a definite self-awareness. To start, Wheatley’s many elegies contain an element of escape and portray death as release from the bodies that keep them captive in slavery. In ‘To a Clergyman, on the Death of His Lady,’ the speaker says to the widower, “thy dear mate, no more to flesh confined, / Exults, a blest, an heaven-ascended mind.”[2] Here Wheatley focuses on the dichotomy between the corporeal and the spiritual/intellectual. She envisions the wife’s soul flying up to heaven, transcending “mortal scenes,” but the additional perspective of Wheatley’s enslavement (however mild compared to others’) adds another layer to this piece. This is especially interesting to note given the relative rarity of a slave receiving education, Wheatley being learned in the Bible and classical texts.[3] For a slave, or even a free black person, education was an escape from subjugation. In this way, Wheatley gives a nod to the fact that her knowledge and education has allowed her not only to write poetry, but in doing so, to attain a higher position in society.

Another poem, ‘To a Lady, on the Death of Her Husband,’ can be read as an analog to ‘To a Clergyman, on the Death of His Lady.’ The speaker implores the lady to “look beyond, thou native of the skies; / There fix thy view, where, fleeter than wind, / Thy Leonard mounts, and leaves the earth behind.”[4] Once again Wheatley views death as an ascension from earthly struggles, and the mind a vessel through which people can achieve a higher form of “living.” Wheatley believes that the deceased husband can “welcome thee [the Lady] to pleasures more refined, / And better suited to the immortal mind.”[5] The thought that death can give “pleasure” is one with which only those who have experienced deep and extended torment can probably identify.

Despite the presumed whiteness of the couples in both poems, Wheatley uses them as metaphors for slavery. Throughout her many elegies, Wheatley references religion; death is intertwined with religion, but also religion with mortality, and death with slavery. The employment of diction in the two aforementioned poems to evoke the imagery of slavery (and its undeniable association with death) through words such as “chain,” “free,” and “bondage” is without a doubt a deliberate choice.[6] In a veiled manner, Wheatley asserts that the only possible avenue of escape from the slavery, or at least discrimination, so entrenched in society, is death.

One may wonder the reason for Wheatley’s seeming abstention from writing of slavery without the use of metaphor, and the answer lies in the societal standards of her time. James Levernier comments in his literary criticism ‘Style as Protest in the Poetry of Phillis Wheatley’ that “given the milieu in which Wheatley wrote, we can hardly expect her to have written an explicit poetry of racial protest. Such poetry simply would not have been published.”[7] The conclusion is that Wheatley’s so-called “objectivity” –- her avoidance of personal accounts –- for which some 20th century scholars have criticized her, was not only a result of the limitations she faced as a writer in terms of possible themes and topics but also a way to circumvent those very restrictions.

The reason Wheatley faced these strict codes is that in colonial America, women lacked not just legal rights but also social ones not capable of being addressed in law. Furthermore, viewing Wheatley as not only a black poet but also a female poet gives greater context to her works. The prevailing thought at the time was that a slave, especially a female one, should not write about the harshness of slavery.  It becomes clear that Wheatley’s gender further limited her choice of topic when studying the restrictions also placed on white women during this time. If Wheatley desired to make it abundantly apparent that she was writing protest poetry, she would have faced difficulties in getting work published. After all, in the late eighteenth century and prior, women generally lacked such power to stage protests against many different issues. For example, the activities of the Daughters of Liberty, one of the most famous protest organizations, remained in the domestic sphere. Members helped sustain the boycott of British goods to force the repeal of the Stamp Act in 1766 by vowing to spin their own cloth and abstain from drinking tea, and this resolution was reiterated in 1768 after the passage of the Townshend Acts.[8] [9] But these protests revolved around what they felt was unfair treatment on the part of the British, not the lower status and limited freedoms of women.

The existence of this suppression is confronted more directly in works from the Harlem Renaissance than in Wheatley’s. Dunbar-Nelson was part of this movement to invigorate black American artistic expression, and she, unlike Wheatley, also broaches the topic of gender roles –- the very ones performed by the Daughters of Liberty during their boycotts –- in her poem ‘I Sit and Sew.’ With slavery abolished for several decades by the time the Harlem Renaissance began to flourish, perhaps Dunbar-Nelson felt she could write about sexism without detracting from the urgency of the still very prevalent racism in society. This was a balancing act, however. Many blacks were reluctant to criticize too harshly members of their race for fear of creating divisions within the black community and thereby giving metaphorical ammunition to whites, but there was still an undeniable degree of sexism in both black and white communities.

In the poem, the speaker laments the fact that she must “sit and sew” when outside exists “the panoply of war, the martial tread of men.”[10] The speaker believes sewing to be a “useless task,” though the first part of the opening line is immediately thereafter appended with the phrase “it seems.”[11] Instead, the woman in this poem desires to join men in battle even if, or maybe because, “on wasted fields” lie the bodies of “writhing grotesque things / Once men.”[12] The speaker must know that death is a likely possibility, but that risk is perhaps the allure when compared to the monotony of her domestic tasks.

But while the speaker in ‘I Sit and Sew’ feels as though she cannot fight in the war, this was actually already slowly becoming untrue by the early twentieth century. When this poem was written, women had already begun to be accepted into the United States military during World War I. Loretta Walsh enlisted in the Navy to become the first women to occupy a position other than nurse.[13]  In comparison, this would have been inconceivable in Wheatley’s colonial America. While women did fight in the American Revolution, they could only do so in disguise, much akin to how Wheatley’s poems only contained implicit, rather than explicit, criticism of slavery.[14]

Meanwhile, Dunbar-Nelson’s poems address social issues more readily and directly, a reflection of the slowly changing attitude towards women and an opening of dialogue, one not experienced during Wheatley’s time. In fact, in the third section of Dunbar-Nelson’s poem ‘Three Thoughts,’ she writes:

For nature has her sorrows and her joys,
As all the piled-up mountains and low vales
Will silently attest — and hang thy head
In dire confusion, for having dared
To moan at thine own miseries
When God and nature suffer silently. [15]

“Film is the buzz-word right now in the Caribbean.” Senior Film Critic Tom Nixon interviews Davina Lee, one of St. Lucia’s top filmmakers, about her new film The Coming of Org.

"The taxi that takes me to the station so early in the morning doesn’t have any headlights, any meter, not...