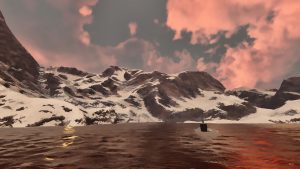 Accept Walks of Life by Henry Hu. Image courtesy of the artist.

‘I’ve been asked to talk to you about what happened, in addition to the report that I’ve written. The content of that report is the reason that you’ve asked to speak to me.’

She said. Then nodded.

‘Have patience,’ one of them outside the interview room said. The lawyer. Her lawyer. ‘She’s been assessed for traumatic stress disorders. She’s still working to piece things together. Well. The timeline, at least.’

It’s so placid, the voice. It neither rises nor falls like a living thing would. He makes no attempt not to be overheard. (By whom, exactly? Who might overhear him?) It strikes her that this is the first time he’s said anything while standing outside the cabin door. It only confirms what she’s known all along.

But it’s odd that she can’t work out which of them it is.

She’d thought about the doors before.

Later, once things are over and she’s heading away from it all, she finds herself flying in a Dash 8 aircraft from Tasiilaq to Nuuk. The Greenland ice beneath her is such a brilliant white that she needs to wear sunglasses just to look out of the plane windows.

Now and then they fly over turquoise pools, which in reality must be enormous lakes scattered across the expansive mass of ice, but at altitude resemble only eyes against the backdrop of white. Context is everything (she assumes). They might have resembled precious gemstones. She might have been reminded of the iridescent shimmer of mother-of-pearl, rather than those watery eyes watching her. They continue to stare at her long after the plane has passed over them. They won’t let go.

On the approach into Nuuk she’s invited into the cockpit. Jagged, grey mountain peaks hurl themselves up into the sky…

Macular degeneration of the eyes. She is reminded of the blue-ish, milky retinas of sick horses.

She is alone on the aircraft, apart from the pilots and a female stewardess named Dorte whose father is Danish. Dorte asks if she can get her anything.

‘Vodka,’ she replies. ‘With orange juice?’

‘Sorry,’ Dorte replies. ‘We’ve only got baguettes. Cheese and ham.’

They’re wrapped in plastic. Taste like the plastic that surrounds them. They’ve been chilled for far too long.

She feels isolated with the propellers and the ice, a rhythm she’s become accustomed to, in some ways.

On the approach into Nuuk she’s invited into the cockpit. Jagged, grey mountain peaks hurl themselves up into the sky; they make a mockery of Norway, but she knows the horizon only appears quite so dramatic because of the landscape that surrounds it, a vista that lacks features of any kind at elevation.

She is unable to recall the uniforms the pilots were wearing. Better that than to forget the mountains.

“Leaving traces of its own continual metamorphosis, the book is an echo chamber, a hall of mirrors.”
Katy Lewis Hood reviews ‘Unbearable Splendor’, by Sun Yung Shin.

How to Be Happy in Warsaw

"In the afternoon, Dona Oliva found herself all but alone on deck, reclining in one of the loungers." Story of...