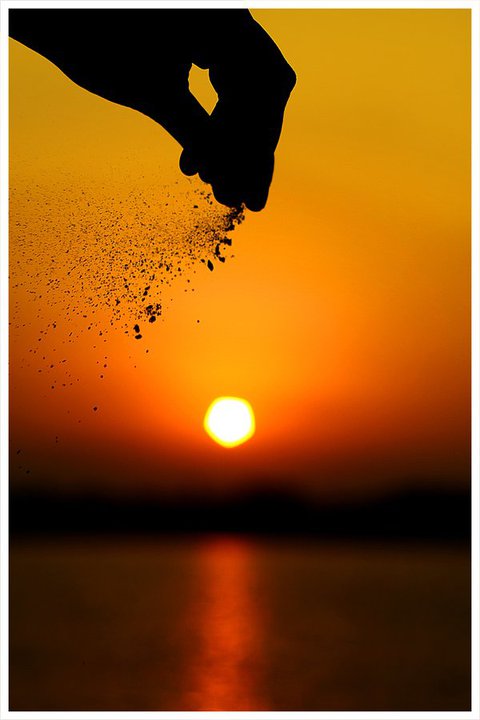 Translated from Danish by Michael Goldman

Normally we hunker down in our daily lives.  Every day has enough of its annoyances — everyday annoyances.  When we involve ourselves with problems that reach beyond the daily and adjacent horizon, we do it half-reluctantly, as if we have to get over something unpleasant, and as quickly as possible return to our inner circles again.  We keep our noses in our private chess games.

But at certain moments in our lives this changes.  Then, it is as if we get permission and the situation demands we lift our gaze.  This happens, for example, to most of us when we stand by an open grave.  Three shovels full of earth are suddenly the only sounds in the world, just accentuating the silence we know has always been, and the silence we know will come one day.  We feel it as if a lid has been taken off our existence.  Our private daily life is suddenly made distant and unimportant.  We are pulled from the routine up to a higher level, the level of poets and thinkers, where we thoughtfully survey humanity. And we hunker down.  Good thing it doesn’t last too long.

At an open grave, or at New Year’s Eve under the stars when the year turns, we get a faint sense and we shiver.  Whew.  Let’s put on our hats and leave the cemetery, let’s go back in to the living room and the warmth, out of the New Year’s Eve night, and wash it down with a drink, put on a mask and blow a toy trumpet.

I remember how New Year’s was received in my childhood home.  I remember all the way back to when my grandfather led the ceremony — and I was very little back then, since he died in 1913.  So it really made an impression.  I remember the stout old man with a white beard and a black corduroy skullcap on his head at that moment when the grandfather clock, which is now standing in my living room, began the twelve tolls.  He did peculiar things.  With a lit candle in his hand he opened a window out to the pitch black winter night.

“Thus we let out the old year and let in the New Year,” he said.  And when he had closed the window again, he added, like an epilogue, “It is in God’s hands what the year will bring.”

And the cold night penetrated the room like a shiver  — like it really was the new year making its entrance.

We keep our noses in our private chess games.
I do not think it was because this ceremony lay outside of the everyday routine that it imprinted itself on the consciousness of a boy only four years old.  I believe it was because of the unusual mood of the adults, the difference in them, that in a flash it registered in the mind of a child, and the occurrences were imprinted.  It was the hush, the solemnity, the humility of the adults in those few seconds that made an impression.  They were not like adults usually were; they were no longer in charge.  They stood like they were being subjected to something, like someone else was in charge of them.

What was the fate they felt so heavily burdened by in those seconds?  How long could their sense and imagination have fumbled in absolutely correct acknowledgment of being small and uncertain, subject to greater powers and to events upon which they had no control?  What was it they let out; what was it they let in?  It could have been worries and hopes concerning sickness and health, economy, the children’s future etc.  More vague and distant it could have been adversity in general — you never know what might happen —something could befall us at any time like lightning from a clear blue sky.  That war could be imminent?  Hardly.  That risk, that possibility has always been too distant, too absurd for a healthy thoughtful person to occupy himself with.  But my grandfather’s thoughts probably did extend to the King and the whole royal family, if he had materialized his vague feeling — and then to people at sea in general, on all the world’s oceans — a prayer for them, because he was an old sailor himself.

Proximate things, all of them, it seems now.  And on top of that, still more vague, the feeling of general incomprehensibility must have loomed — the acknowledgement of immense vastness and our own pitifulness and inadequacy.  But these were proximate things they had to take from reality as they knew it — and back then, they still could know it.

The reality back then, was almost something comforting in itself, I think.  Something real and understandable, observable like the mechanism in a bicycle frame.  Something you could talk about.  Though it might be maltreated, it could always be repaired again.

And what have the stack of calendars with advancing years brought us since then?  What will have snuck darkly into our minds when we this year lift our noses from the proximate? Because in these seconds a year is being replaced by another, and we make a weak head-shaking attempt to understand our existence and our circumstances here on Earth.

What has been let out and in since then?

Two World Wars that were of such magnitude that hardly anyone before then had possessed sufficient fearful tendencies to be able to imagine them.  Both conducted under many intense, clenched hopes.  The first in order to, among other things, bring an end to all wars.  The second to give people freedom from fear.  And in the bargain, we have a world where fear — or the reasons for fear — are still on the rise, nearing apocalyptic proportions. Since the reasons for fear are so strong, so well-founded, most people refuse to look them in the eyes, and instead quickly turn away from the fearful premonitions, to put on a paper mask and comic glasses, and continue with their immediate and cosy lives as if nothing were happening.

And the paper masks are called self-assurance, arrogance, conventional thought,   superciliousness, nonchalance and indifference.  They are found in all these shades and in combination, and the glasses are called lack of imagination and torpor.  In this get-up one can shout starry-eyed and naive at those less-disguised.

We refuse to look apocalyptic danger in the eyes; we suppress it from our thoughts.  Or, if we send it a glance and give it a thought, we hope — although we previously have experienced that fearful misgivings have been fulfilled and fulfilled to excess — that this time it is too terrible to actually occur.

And besides, to whom God has given a task, God has also given ability.  We have certainly only smiled before at this old-fashioned belief that smells dustily of emanating from a civil servant, but we put our trust or at least our hope in it anyway, at least this once.

Of course there are people who deal with this, people in high office, as they say who work with things like this — trying to avert them.

And we forget, or don’t realize that God has not given that amount of ability to anyone. The man on the street, the scientist, nor the politician has the perspective on these things or enough imagination to grasp the extent of their impact.

No human imagination or brilliance is enough these days.

The world is not the same as it was.

"Like the country you are/ named for, used to being un-/ noticed for centuries at sea..." Poem of the Week...