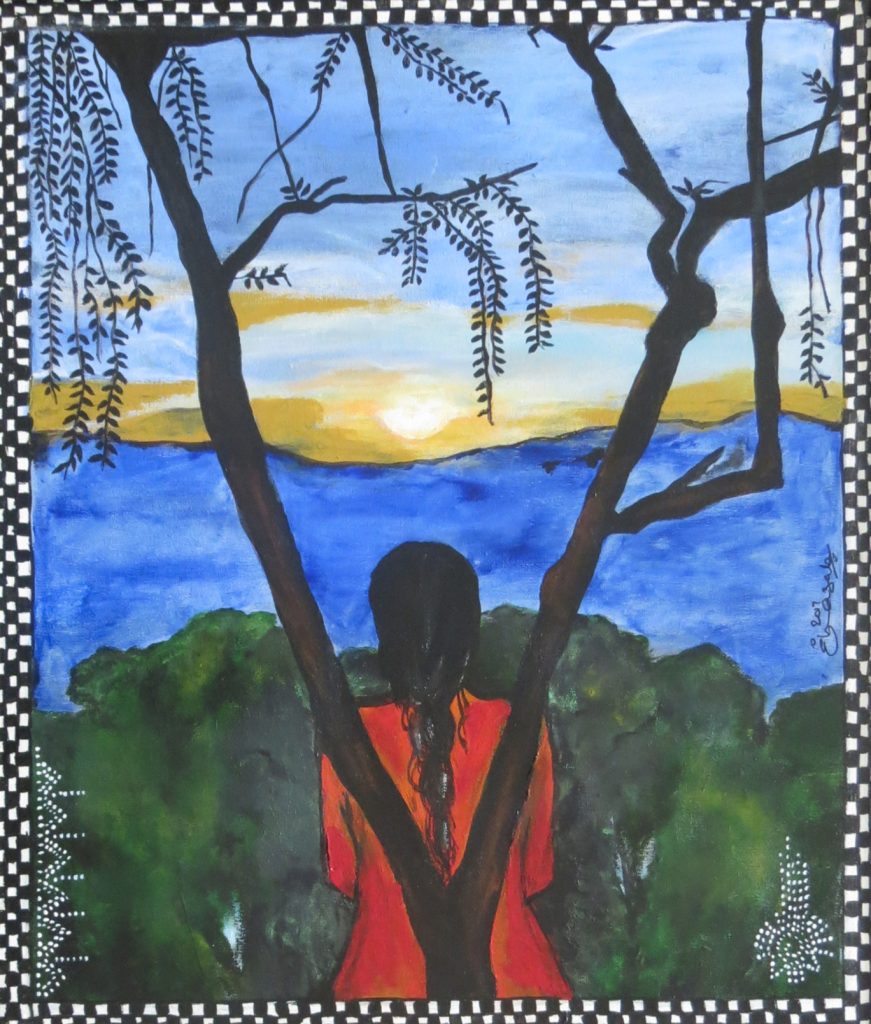 The Other Lands by Ghazala Irshad. Artwork courtesy of ArtChowk the Gallery.

The word crumbles with the arrival
of its other half       the word
of nothingness and the placeless
is the staple of my people
they cannot ensure a clean death for me
they cannot ensure my reincarnation back to those lands
for my heart will start calling others
— when the breath is crystalline
Others who look alike
are flying towards their archetypal mothers
through vertical horizons declaring:
‘no one is abandoned
everyone is loved       if not by their parents
they are by their God       yes!’
The word is contagious when it is not written down
it airs from a forgotten grave       clinging on the tail
of a breath that has no lungs behind it
it hangs over bodies making love
like a lamp       illuminating the beauty of pale
— here and there
I’m looking forward to welcoming that word
or else I’ll be left alone with the blue witch’s
broom in the side alley
of an unspeakable childhood
or a bird will cross my path
towards the end of my homeostatic cycle.
~ Elif Sezen
Elif Sezen was born in Melbourne in 1981 and grew up both there and in Izmir, Turkey. She settled in Melbourne in 2007. Also an interdisciplinary visual artist, she writes original poetry in English and in Turkish. In 2014 she published a Turkish translation of Ilya Kaminsky’s acclaimed book ‘Dancing in Odessa’, and her own first work in Turkish, ‘Gece Düşüşü’ (‘Fall.Night.’), an experimental mix of poetry and prose, was published in 2012. Her collection of poems ‘Universal Mother’ was recently published by GloriaSMH Press, and she has also published a chapbook titled ‘The Dervish with Wings’. She holds a PhD in Fine Arts from Monash University. Poet’s note: This poem first appeared in ‘Universal Mother’, GloriaSMH Press, 2016.

“The last thing he could remember was the smell of the free-ranging animals. The smell, and the feeling that someone or something was lurking in wait for him in the dark.” Story of the Week (May 15), by Julia Butschkow. Translated from Danish by Peter Woltemade.

"It was then they heard the voice, like someone speaking through an electrolarynx." Story of the Week (April 28), by...