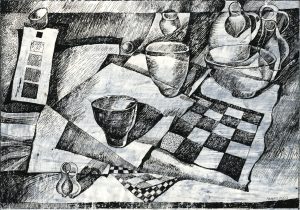 ‘After Chess Game’, by Iryna Lialko. Image courtesy of the artist.

At Deli Delight, we served eggs all day, any way you wanted, along with, of course, bagels, corned beef, and our signature grilled sandwich called the Red Russian (made with red cabbage, pastrami, provolone, and “special” sauce, which was just Thousand Island, but we didn’t tell anyone). Unless you’ve worked the line, though, you wouldn’t think eggs were such a big deal, but if there’s one thing Featherly taught me, it was that Eggs-Are-A-Bitch.

I mean, really, you try to watch five sandwiches on the grill, plate three bagels with salmon, and still manage to cook one order of eggs over easy, two scrambled, and poach another order — all with ten more waitress slips spinning on the wheel. That’s some crazy shit, let me tell you, especially if an order isn’t served just right. Customers might gobble down corned beef with fatty hunks hanging off it, but if their eggs are just a touch runny, or too hard, the same assholes never hesitate to send ’em back.

The thing was, Featherly (David Featherly, but no one ever called him David), he could handle it. The guy would be sweating through his hairnet, his thinning blond hair as greasy as the grill, but he was like a magician: arms waving, body twisting, plates seeming to fly up to the pass-through. He’d slap the ready bell and be back flipping a burger before the damn thing stopped chiming.

Now don’t get me wrong, he could lose his cool and scream when some dirtbag sent back an order he knew was perfect. One time he yelled out “Fuck you!” at the top of his lungs and threw a plate into the wall, just missing my head. The whole restaurant heard it, and Tom, the owner of Deli Delight, came running into the kitchen. But what could he do? Featherly just ignored him, already back at the range doing his thing, making the order right.

Yeah, he was a natural talent; he’d never have to look hard to find a job, because there were always openings for cooks. The problem — and this was what made Featherly even more amazing — was that his dream, what he really wanted to be, was a rock star. I shit you not. It was hysterical when he was tossing eggs while trying to play air guitar and singing, “I am the eggman… They are the eggmen…I am the walrus…goo goo g’joob —” But he could actually play guitar, and he sounded pretty good. I mean, I was blown away the one time I heard him in that dive off Ogden Avenue, playing some blues-rock stuff, classic jam songs like “Whipping Post” or “Smoke on the Water,” ones where they could play the same riff over and over and no one seemed to give a shit. His band called themselves De-Gen, which Featherly said meant “a-generation-not-to-be-defined,” but everyone else thought it was just short for “degenerate.”

In retrospect, it must’ve been the way I embraced such a crappy job that impressed Tom…

The only problem was on the weekends, when he’d show up at the restaurant after jamming all night and looked like a total mess. He had some sort of sugar imbalance, or maybe it was a mental imbalance, I couldn’t tell one way or another, but there were days when, during prep, he was totally out of it, waving knives around like he was conducting a symphony or something, all while trying to slice up fruits and vegetables. Thank god he couldn’t pull that shit when prepping the meats, although sometimes he would get in a trance at the slicer, his head lolling back and forth as his arm pushed a hunk of pastrami back and forth through the spinning blade. I watched him close then, and let me tell you, it was scary.

But what’s funny is that it was his being wasted that started my move up the Deli Delight totem pole.

Up until then my one claim to fame was cleaning the grease trap, a nasty chore that all the other dishwashers always — I mean always — tried to squeeze out of. The trap wasn’t very big; the hatch barely a foot square, and the tank underneath not much larger than a couple large buckets. But the thing had to be cleaned out like every other day or else this nasty black sludge would ooze up through the hatch seal — and into the kitchen. Hey, I didn’t finish high school, but I knew enough to know the health inspector would shut us down if he ever saw that mess.

It wasn’t that hard: you unscrewed the hatch, scraped out any hard grease on top, and then reached down and pulled out whatever gunk clumped on the bottom. The problem was the smell; I’m not even sure how to describe it. Rotting flesh? Dead body? Not that I’ve ever smelled those things. Guess you could say it’s like a giant vat of putrid pus. I’m talking b-a-d.

Big surprise no one ever wanted to clean the damn thing.

But it was on the job description, and if I had to do it, I was going to do it right.

You were supposed to use these rubber gloves that went up past your elbows, and I did use them the first few times, but then I found that to really clean the thing properly, I needed to feel what I was doing and get every little bit of nastiness out the first time. Tina and the other waitresses looked at me like I was from another planet. I’d have to wash my hands afterward with this industrial-strength soap that turned my skin white, but once I’d done it a few times, for some strange reason, I didn’t really mind.

In retrospect, it must’ve been the way I embraced such a crappy job that impressed Tom, the owner-manager of Deli Delight, because after only four and a half months on the job, he let me start handling some prep. Okay, that’s not entirely accurate. He didn’t actually let me handle some prep, more like he tolerated it. I mean, like I said, Featherly could look pretty haggard, and I guess Tom got to the point where he didn’t really give a crap who helped him out.

“We all lived in a hostel on Green Avenue in Bed-Stuy. My days were spent cleaning the rooms and making.” Michael E. Wilson Jr. writes of life and love at an international hostel in New York City.

"And the crushing of these hopes and dreams is what Sabyn Javeri leverages with incredible skill." Casey Harding reviews ‘Nobody...