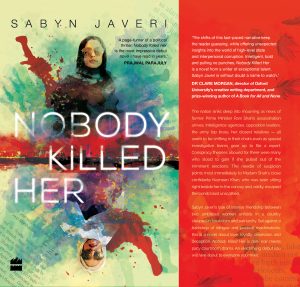 In today’s increasingly prejudiced world, where far too often action comes before thought, ‘Nobody Killed Her’, by Sabyn Javeri, is an important and necessary book. I started ‘Nobody Killed Her’ with trepidation. It begins with a story within a story and with the basic plot already revealed, that the protagonist, Nazneen Khan, is on trial for the murder of her friend, the former Prime Minister in an unnamed middle eastern country, Rani Shah. Add to that the fact that for the first third or so of the book the protagonist, Nazneen Khan, does not perform many actions — she is passive, she does what others tell her to do, she stagnates, allows the world to whip past her while she does the bidding of her best friend who Nazneen Khan, as is laid out in the opening passage, “…knew…the way I know God…I worshipped her, believed in her…” — and I was left with the blueprints for a mediocre novel, something that I would typically read the first few chapters of only to put away as my frustration and dissatisfaction overcame my desire to always finish what I started.

And yet, I finished ‘Nobody Killed Her’ in a single eight hour sitting, the kind where you look up surprised that the afternoon has turned to night, put the book down, then immediately picked it up again to try and figure out just how Sabyn Javeri crafted such a beautiful, brilliant novel.

The main narrative of ‘Nobody Killed Her’ concerns the rise and fall of Rani Shah, who may be a fictional representation of Benazir Bhutto, Pakistan’s first female prime minister. Like Benazir Bhutto, she was the daughter of a prime minister who was overthrown by a military coup. Both Ms. Shah and Ms. Bhutto built an incredible amount of support in a society where women were considered less-than; both were elected prime minister, and both were beset by problems and corruption and eventually assassinated.

The book has two distinct narratives. One, broken up into short, dialogue-only sections at the beginning of every chapter, takes place in a courthouse where Nazneen Khan is on trial for the murder of Rani Shah. The second, and by far the larger of the two narratives, looks back on the events that are touched on in the first. Part of the reason why this book is so compulsively readable is because of this structure. After finishing a chapter you say, “OK, I’ll just read the first part of the next,” but end up reading one chapter after another to find out just how things came to pass. It is a brilliant device, and an interesting choice for Sabyn Javeri. The structure of the book reminded me more of a thriller, of a crime novel, yet the premise of the book, the very title, ‘Nobody Killed Her’, implies that the murder never took place. So the reader is left guessing until the very end. For something that reads as more of a historical novel, Ms. Javeri employs a style that is very effective at moving the story forward.

Sabyn Javeri gives us eighty pages or so of hope, but by the second third of the book we start to see the reality of the world.

Where this book surprised me was in its use of Nazneen Khan as the story teller. Nazneen Khan is, as far as I know, a completely fictional character. The book begins with her meeting Rani Shah in a New York city apartment building. From there this sometimes untrustworthy narrator describes in detail the events surrounding Rani Shah’s phenomenal rise to power, and the terrible lengths that the military and parliament went to in order to discredit her and force her out of office. Along the way, Nazneen Khan accumulates power, while still maintaining a sometimes frustrating naïveté. The interesting part of this, for me, was not that she understood how Rani Shah had become corrupt, and how the entire government structure in Pakistan was corrupt, but, rather, how corruption could exist when Rani Shah was in power. The opening section where Nazneen Khan states that she views Rani Shah as a God-like figure is reiterated throughout the novel. And this, I think, is a tell that Nazneen Khan is meant to symbolize each and every woman who strives for freedom and equality in the middle east. After generations of subjugation and horrendous atrocities, a female prime minister who rises to power with a promise to open hundreds of schools for girls across the country, who vows to fight corruption, who promises equal rights, could ostensibly be viewed by anyone as mythic, able to overcome anything, more than human. And the crushing of these hopes and dreams is what Sabyn Javeri leverages with incredible skill. By the end of the book, you are left more broken by the knowledge that there was hope than by the fact that that hope, in the present day, has been suppressed.

Sabyn Javeri gives us eighty pages or so of hope, but by the second third of the book, we start to see the reality of the world. “His wife leaned forward and said, ‘Here they don’t take single women seriously.’”, “‘A woman alone is easy meat,’…”, “’A man’s years are measured by his wealth but a woman,’ his wife added, ‘ no matter how rich or powerful, once she is past thirty, no one wants her…” For me, these snatches of conversation marked the turning point in ‘Nobody Killed Her’. Where before you had strong, independent female characters, from that point on both Rani Shah and Nazneen Khan are used by someone else: Rani Shah by her husband and the military, Nazneen Khan by Ms. Shah herself. There are sections where Nazneen builds power, where the reader is lead to believe that she will become the force to change the country. “Balgodi didn’t know it, but the fact that he felt threatened by me felt like a compliment. I began to feel slightly God-like. I could make things happen. It was so easy,” Nazneen thinks. But, just as quickly, we are reminded of her impotence. “Balgodi pushed my head into his crotch. I screamed. ‘Rape Laws are changing,’ I said, pushing against his hand…He laughed as if I’d cracked a joke. ‘I don’t see four witnesses. Do you?’” Even the ending, though happy in comparison to the rest of the book, was less about empowerment and more about how it is better to run and hide.

For all of our technological progress, for all of our knowledge, we as a world society still have not progressed beyond infancy. We are trapped by prejudices and the very knowledge that what we built is itself a prison, a prison that shows us every day how intelligent we are. Yes, we have built skyscrapers, yes, we have sent satellites to probe the atmosphere of Jupiter, but there are still injustices committed on this earth that are too terrible to contemplate. Books like ‘Nobody Killed Her’ are a striking and important reminder that it is the arts that keep us human, and only when we have grown culturally as much as we have grown technologically will we truly be intelligent.