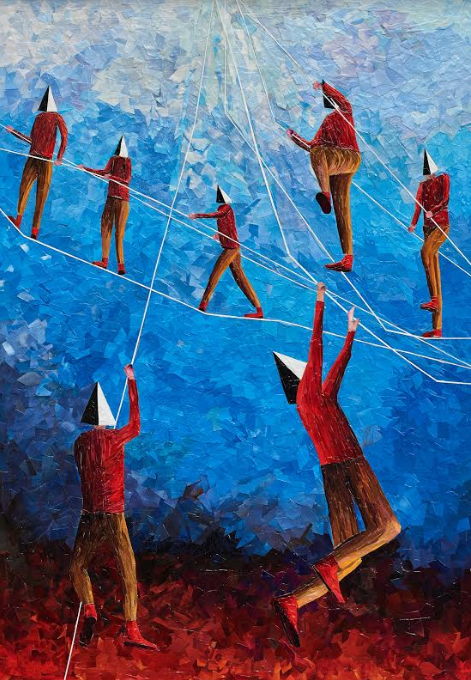 Nobody Wants to Go to Hell by Albin Talik.
Artwork courtesy ArtChowk the Gallery

A neighbour killed himself at Lake Nockamixon.
And, unmooring the boat the next day,
we had expected more, some kind of evidence
of a death. Even just the answer to how.
I admit I felt nothing when the news broke,
it was only the stained glass bellies of the purple martins
flaring, that made my skin bristle into the laketop stillness.
I’ll admit, too, I thought the turkey vultures crowning
my view to be insensitive but offered aliveness to them,
hoped they merely wanted to kiss me with their beaks
the way a lover might do, feverishly after too long apart.
I lay skyward. Water knocked a hello on the hull
and I thought of it as pregnant with air, paddles and lifejackets.
Fishing line tore through the afternoon to grasp sunnies.
We reeled them to our island, held each, struggling and wild,
in our human hands and, before releasing them with calls
to be grateful, let them gasp a moment, just long enough
to reveal the true weight of a body in air.

M. J. Arlett was born in the UK, spent several years in Spain and now lives in Miami. Her work has appeared or is forthcoming in B O D Y, The Boiler, Lunch Ticket, Poet Lore, Mud Season Review, Rust + Moth, and elsewhere. She will begin her PhD at the University of North Texas in the fall.

"The Pink Taxi service... launched in March 2017 in Karachi and is already seeing an overwhelmingly positive response." Ifra Asad...