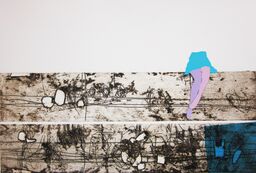 A miniature park with two or three benches, a pair of swings, and a small wooden table, where pensioners sit and play chess every day—one of those little neighborhood commons that used to be in front of every residential building. Ever since high-rise blocks have begun springing up like mushrooms after the rain, these little parks have become a rarity.

It was midnight on a summer evening—when it is most beautiful, Maya concluded. Only in the summertime, when the watch’s hands greet each other at their midnight passing, do you get that perfect blend of darkness and warmth, nor do you have to wait too long to see the sunrise. Just four or five hours. Quite enough.

But that would be too clichéd, she thought, and decided all this had to end sooner, before those first rays that make you squint. There, on the little chess table, she had made her first move when just three years old. On the lap of her grandfather, the best chess player in the neighborhood.

“This won’t do at all; the little one is helping you. You can’t win without her,” his opponent quipped and laughed loudly.

Maya remembered that moment as if it was yesterday. Her first chess move, and later her first victory. All she did that day was move a pawn. But it helped someone, and her grandfather won thanks to her! After that she sat on his lap every day and always moved the first pawn. And her grandfather always won.

Back then she realized for the first time that she was important in this world—she could change things.

Now, sitting on the bench, she just smiled. Her grandfather was to blame. He started it all. It was no coincidence that she had chosen this park. Here, where everything started, it ought to finish.

The two swings hung peacefully. She wanted at least one of them to move a little and creak—that would be so fitting right now—sadly and nostalgically, to remind her of the day she found Jacky.

Jacky was a little puppy she saved from the neighborhood bullies. We all know kids like that—the loudest and roughest, usually from problem families, with a real destructive streak. Maya always thought they were far more dangerous than all the adult thugs and muggers. Children’s viciousness is just as genuine as adults’, and their psychopathic traits don’t go away over the years; people simply learn to conceal them.

Jacky was whimpering pitifully, and it broke Maya’s heart. At one point she couldn’t stand it anymore, and her fear of the bullies was suppressed by the sincere instinct to help and do the right thing. She pushed her way through them, grabbed the puppy, and they fled together. The dog was faster. The roughnecks caught Maya and beat her black and blue. But so what—it wasn’t so terrible. Nor was it terrible that the bashings went on for weeks and months wherever they saw her. What counted was that she had made a difference. She had saved the life of a dog, and it was worth more than that of many humans she knew.

Her contemplation was interrupted by the local drunk. He staggered past without noticing her in the dark and collapsed onto the bench opposite. If it had been anyone else, she would have been frightened. But no one was afraid of Smalley. He slept in the cellars of their apartment buildings, lived on people’s charity, and bought himself rakia with the money from begging. Sometimes he got his ration “on the slate” at the local shop—they trusted him there and knew he was an honest drunk who always repaid his debts.

Children’s viciousness is just as genuine as adults’, and their psychopathic traits don’t go away over the years; people simply learn to conceal them.

On one such evening, many years earlier, she was sitting on this bench with her first boyfriend. He gave her chocolate, and she didn’t know it was actually stolen. That was the greatest love in the world. He even took her with him to the local amusement hall and let her sit next to him while he played video games with his buddies. None of them took their girlfriends with them, only him. That was a real distinction and made her special in the neighborhood—she felt just like she did when she had been the only child sitting with the pensioners, watching them play chess and sometimes allowed to move one of the pieces.

The two of them were sitting alone. He was slobbering around on a bottle of beer that he had managed to smuggle out of home. He proudly held the bottle in one hand and her with the other, and when someone passed nearby he always spoke a bit louder to gain their attention.

Along came drunken Smalley and, as often happened, he collapsed onto the bench and fell asleep.

Her boyfriend was thirteen—big enough to want to prove himself a man but still so weedy that he chose the most cowardly way of doing it.

“Piss off, you creep! I’m here with my girlfriend, and you stink!” he provoked, standing up tall and puffing out his chest like a rooster.

But Smalley was fast asleep. The alcohol had taken hold of him. He breathed heavily and lay like a log on the bench. And he snored—a very distinctive kind of snoring, Maya recalled, now listening to the same sound once again.

“Hey, I’m talking to you, get lost!” her boyfriend yelled and went up to him.

“Leave him alone, he’s not bothering me—,” Maya tried to say but was rudely interrupted:

“Shut your trap! I’ll decide if I’m going to leave him alone or not!”

He grabbed Smalley’s weak, gangly body with both hands and pushed him off the bench. Smalley plumped heavily to the ground, then rolled over and started to moan:

“Kid? Me, a kid? Move it, you stupid alkie. Get out of my sight! Do you hear? I’ll show you ‘kid’!” he yelled furiously and started to kick him. Smalley couldn’t get up, he groaned and begged him to stop, but the pleas came out as a garbled murmur, perhaps because of the alcohol, or the pain. Or both.

All at once, Maya got up and went to him. Her boyfriend stopped his kicking and turned toward her, amazed by her defiance:

“Didn’t I tell you—,” he blurted, but he never finished what he was going to say. A sharp slap cut across his pimply cheek, and he just stood there with his mouth half open. Words failed him as he looked into Maya’s piercing dark eyes. He would certainly never forget that look, she smiled as she recalled the “strong man” taking fright and bolting, and he never mentioned that evening again. She helped Smalley back to the bench, and he muttered: “I knew you’d help me, my child . . . I knew you’d come back.” The next day, Smalley had forgotten what happened and didn’t remember Maya either. But that didn’t matter. She had helped, she had made a difference.

“I have repeatedly pictured myself in the prison yard. Mentally, I have executed myself several times.” Our Poet of the Month, Payam Feili, interviewed by Udoka Okafor.

"On the bottom shelves of closets,/ the paper-dolls lay in cots,/ penciled-in eyes trained on doors/ that let in rabid...