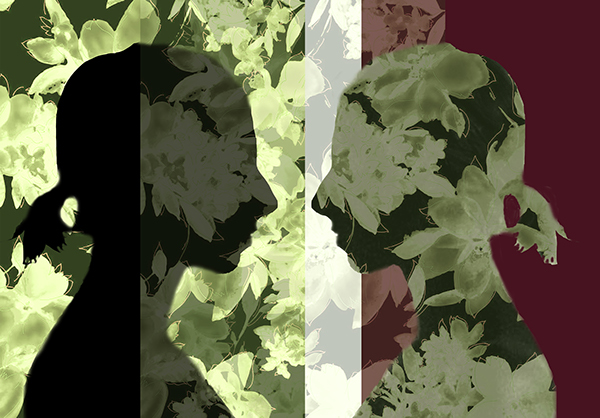 Weave Me a Story of Seduction and Ruse by Shameen Arshad
Artwork courtesy of the artist.

mango trees laden with fruit
tempted neighbors
to swing in the branches
at odd hours.

The probability of obtaining
kerosene to build a fire
under a toy clay-pot
was remote, unless a brother
trekked to the nearby basti
to get his kite patched.

Boys wrestled in the afternoon
till someone broke an arm,
or tied string on a rat’s tail
and swung it around.

On the bottom shelves of closets,
the paper-dolls lay in cots,
penciled-in eyes trained on doors
that let in rabid dogs.

The houseboy’s disappearance
raised some eyebrows; rumor was
the police held him up
side down till he was all ears
— this after the break-in
he was suspected of, but way after
his peek-a-boo on the way to Grandmas.

Saba Husain’s poems have been published in Barrow Street, Cimarron Review, Natural Bridge, Reunion: The Dallas Review, Jaggery, and The Houston Poetry Fest Anthology. Saba grew up in Karachi, but has lived in Houston forever. She has a B.A in Creative Writing from University of Houston.

"The coal in his eyes, in his ears, on his lips, in tears/ that cleansed his corneas, in fingernails. The...