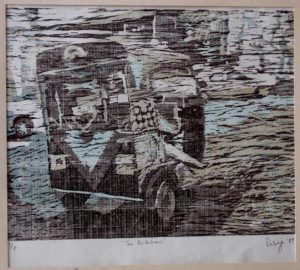 Ko Miyong, in her Pyongyang apartment, put the paper down with a feeling of contempt. “Ugh. What is this?” she said to herself. “Who reads stories like this?” She got up to get a glass of corn tea from her kitchen, returned to her living room, and turned on her television. As far as she was concerned, “The Visitor” was an old, irrelevant, and uninteresting story with nothing to say about her own time or her own needs.

“Besides,” she thought, “it’s sketchy, and there is no story yet. It doesn’t reveal much. I just don’t like short stories.”

She pulled out a container from under the television stand and fingered through her DVD collection of South Korean melodramas, which she had purchased from backstreet vendors behind Yongkwang Street. She could watch the shows for hours, and there were three hours of shows on each videodisc. After she found the one she wanted, she inserted it into a player and put on a set of headphones so that no one in the apartment building would hear or report her happy satisfaction.

How special the people in the melodramas appeared to her. How much better they lived, how much more attractive they looked, how much more romantically they spoke with their softer accents. She cried with their pain; she laughed with their joy; she celebrated with their achievements. And even if she was sometimes disappointed, seeing and feeling their world was always worth her while. At 4:00 a.m., she fell asleep, having watched four DVDs.

Daybreak came, and despite struggling to awake at the sound of her cell phone alarm, Miyong managed to make herself up in time for her Monday morning American literature seminar at Pyongyang University. She ran and arrived at the classroom, with ten minutes to spare, and shortly afterward, the visiting professor from Syracuse University walked in and greeted everyone. He stood beside the lectern and asked the five men and ten women in the room to share their reactions to “The Visitor.” A few students volunteered brief comments:

“The story was short,” said a young man.

“I thought it very sad,” a woman confessed.

“It was interesting,” remarked another woman.

“It is about inequality,” a man stated.

After she found the one she wanted, she inserted it into a player and put on a set of headphones so that no one in the apartment building would hear or report her happy satisfaction.

Miyong was tired, and her head was falling, which signaled to the professor to call on her. She lifted her head, and he repeated his request for her reaction. She felt a surge of candor and wanted to say the story was boring, that she hated it, but instead, she told the long-faced man, “I don’t know the people. I don’t know their time.”

“I am glad you said that,” the professor replied, and he began to lecture: “‘The Visitor’ is a work from a different time when different standards of literature prevailed. Nevertheless, when the story was published in the United States in 1910, it was among the most debated pieces of American belles-lettres. Here was a narrative that artistically portrayed the controversial ideas, for its era, that women could be wealthy and respected, that female housekeepers could be intelligent and discerning, and that the working class could be appreciators and innovators of poetic form. What was equally scandalous was the irony of the story, which formally conceded to upper-middle-class values by rejecting a manual worker’s mundane free-verse poem, but really, metaphorically, told readers that the upper-middle class was removed from everyday life and essentially inhabited a museum or a time capsule. We see that idea clearly represented when Alendale and Sorsha go up to the ‘second floor’ of the brownstone, when they walk through the corridor decorated with ‘vases and paintings,’ and when they enter the ‘sheltered, secluded room’ with the seated ‘ancient woman’ whose views ‘remain the same’ against the flow of time. Several past critics have explained that the irony and the metaphor allegorically extend to the characters’ names: Alendale means ‘harmonious valley’; Collier means ‘coal miner’; and Sorsha means ‘freedom.’ Genealogically, the old woman was completely cut off from her class roots. In short, ‘The Visitor’ was a controversial story because it implicitly invoked a rejection of relict traditions and static tastes and because it expressed sympathy for wage-earning men and women: the toilers, the housekeepers, the ‘hardy laborers.’ But despite the repulsion of the privileged and the self-satisfied in the 1910s, the general public opinion regarded the tale favorably, as a sensitive and thoughtful parable with truthful pictures of the times. And it was frequently reprinted and anthologized until 1945, when everything suddenly changed after Auschwitz and the Atom Bomb. Today, on its centenary, most people do not remember ‘The Visitor,’ while the few literary specialists who do, often read and interpret it at the exclusion of its social and artistic concerns. The ecocritics say it is anthropocentric. The feminist critics say it is sexist. The postcolonialist critics say it is hegemonic. What do you say?”

Miyong strained to listen to the lecture, unable to catch all of the visiting professor’s words. The other seminar students in the classroom were taking notes. She held her pen, trying to write, as her mind was drifting away into melodramas of medical doctors, revenge plots, and pure love.

Alzo David-West is a past associate editor of the North Korean Review. He writes literary fiction and serious poetry about North Korea (past and present). He is also published in the areas of aesthetics, language, literature, philosophy, politics, and social psychology. His creative writing about North Korea appears in Cha, Eastlit, Missing Slate, Offcourse, StepAway Magazine, Tower Journal, and Transnational Literature.