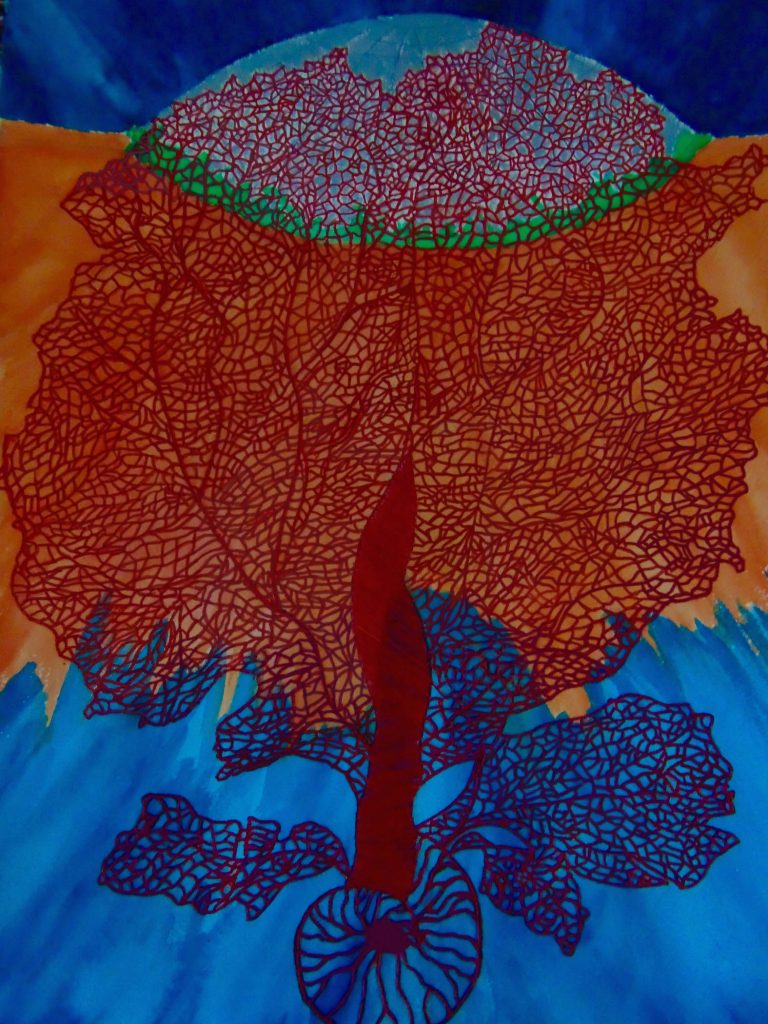 Nuclear Hemmorhage: Enewetak Does Not Forget
Watercolour and thread, 2017
Joy Enomoto
Image courtesy of the artist

She brings her host a basket:
earrings, mats, testimony
This basket, she says, is medicine.
Some may ask: what is a basket to a bomb?
Why bring medicine when they send ships    bombing
their laps
to jellyfish
They didn’t know what to call them, she said.
They didn’t know the name.
this ocean
an open wound
but who gives a damn
moonlight scorched from wombs
who gives a damn
who gives a damn
who gets to damn who
She brings her host a basket
Then, bone by bone
her low tide lips
reveal the names
her gods & wayfinders
her mother & country
her island sea
This is a basket of names,
a basket of stories.
For afterbirths
of fallout –
war-petalled &
sacred-starving,
her story is the medicine we ache for.
~ No‘u Revilla
Noʻu Revilla is a queer Polynesian poet and educator. Born and raised on the island of Maui, she has performed and facilitated creative writing workshops throughout Hawaiʻi as well as in Canada, Papua New Guinea, and the United Nations in New York. Her work has been exhibited at the Honolulu Museum of Art and has appeared in Poetry, Black Renaissance Noire, Hawaiʻi Review, Anglistica, and Poem of the Week by Kore Press. Her chapbook ‘Say Throne’ was published by Tinfish Press in 2011, and she is currently finishing her PhD in creative writing at the University of Hawaiʻi-Mānoa.

“The couple embraced and stood silent for a moment, listening to the patter of the raindrops outside.” Story of the Week (December 23), by Charles Edward Brooks.