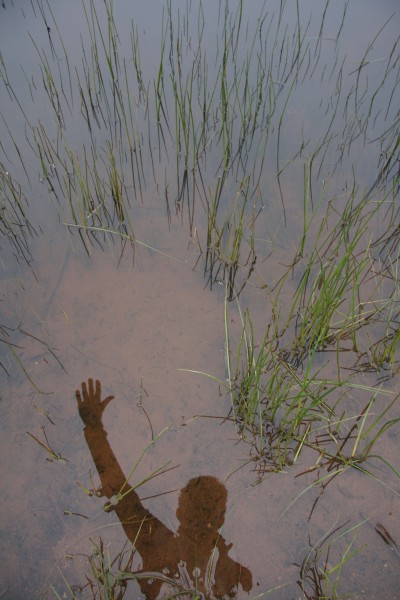 Photograph by Mark Wyatt.
Image courtesy of the artist.

Waikīkī was once a fertile marshland
ahupuaʻa, mountain water gushing
from the valleys of Makiki, Mānoa,
Pālolo, Waiʻalae, and Wailupe
to meet ocean water. Seeing such
wealth, Kānaka planted hundreds
of fields of kalo, ʻuala, ʻulu in the uka,
built fishponds in the muliwai.
Waikīkī fed Oʻahu people for generations
so easily that its ocean raised surfers,
hailed the highest of aliʻi to its shores.

Waikīkī is now a miasma of concrete
and asphalt, its waters drained
into a canal dividing tourist from resident.
The mountain’s springs and waterfalls,
trickle where they are allowed to flow,
and left stagnant elsewhere, pullulate
with staphylococcus. In the uplands,
the fields and have long been dismantled,
their rock terraces and heiau looted
to build the walls of multi-million dollar
houses with panoramic Diamond Head
and/or ocean views. Closer to the ocean,
hotels fester like pustules, the sand
stolen from other ʻāina to manufacture
the beaches, seawalls maintained
to keep the sand in, so suntan-oiled
tourists can laze on what never was,
what never should have been. No one
is fed plants and fish from this ʻāina now—
its land value has grown so that nothing
but money can be grown—its waters unpotable, polluted.

Each year as heavy rainfalls flood the valleys,
spill over gulches, slide the foundations
of overpriced houses, invade sewage pipes
and send brown water runoff to the ocean,
the king tides roll in, higher in its warming,
lingering longer and breaking through
sandbags and barricades, eroding the resorts.

This is not the end of civilization, but
a return to one. Only the water insisting
on what it should always have, spreading
its liniment over infected wounds. Only
the water rising above us, reteaching us
wealth and remembering its name.

From Maui, Brandy Nālani McDougall is the author of a poetry collection, ‘The Salt-Wind, Ka Makani Paʻakai’ (2008), the co-founder of Ala Press, and the co-star of a poetry album, ‘Undercurrent’ (2011). Her book ‘Finding Meaning: Kaona and Contemporary Hawaiian Literature’ (University of Arizona Press, 2016) is the first extensive study of contemporary Hawaiian literature. She is an Associate Professor of American Studies (specializing in Indigenous studies) at University of Hawaiʻi at Mānoa.

“You bend your head,/ offering up a scalp for my perusal,/ inviting some small sense of revelation/ in this act of witness.” Poem of the Week (February 3), by Rosalind Jana.

"Outside everything burst into intensity: loud voices, chants, stomping feet." Story of the Week (September 22), by Ania Mroczek.