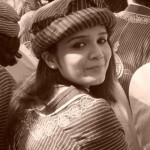 When I first came across The Missing Slate, I saw it as exactly what it is called; the slate that “had been” missing. All through my years at university, my mind had remained in a constant state of overdrive – there was the plethora of madness to blame. There was so much to be shared. The paintings, the photography, the sculptures, the stories, the poems, the hormones, the emotions. Hell, even graffiti had a story to tell. Back then we had no slate, and so we had nowhere to document our own evolution. For the dreamers among us, this evolution never really stops. Neither does the expression of it.

Today, I see The Missing Slate as a melting pot of all things awesome in art, waiting to be found. And I’m glad I get to be a part of it. I’ve been watching Hassan work on the magazine for a couple of years now, and as a result, I’ve been following the magazine too. I look forward to seeing it in print – because what’s awesome should be felt. And equally if not more importantly, because I love the smell of paper.