Continuum premiered earlier this month on the Canadian network, Showcase and in what is fast becoming a fixture in futuristic sci-fi lore centers on a dystopian world. In 2077, corporations rule the world and though life is almost perfect (MP: gizmos and gadgets galore!) dissent exists, spearheaded by “Liber8” — a group desperate for their rights to self-determination. It isn’t a spoiler to say five minutes into the pilot, Liber8 is sentenced to death. Then it gets interesting; the group escapes, travels back in time and “accidentally” take CPS Protector Keira with them.

In the present (past?) her technology connects her with Alex Sadler, a tech wizard who is responsible for creating it in the future. With the help of the Vancouver PD and Alex, Keira must hunt these terrorists down before they begin to change the past and adversely affect the future.

As Alex points out to Keira, there are two theories about time travel: the first involves a change in the space-time continuum that has serious repercussions on the future (MP: one misstep in the past alters the future…gotcha!). The second theory suggests that the journey itself was an event that has already occured and people are once again going through the motions, the changes that occur were destined to be (MP: cue Fringe flashbacks…the First People, gaah!). Of course, Keira struggles because she needs the future to turn out a specific way. It’s been hinted (SPOILER ALERT) Alex is well aware of Keira’s role and created technology specifically to help her when she time-travels.The terrorists are content creating enough havoc to create a future they so desperately desire. 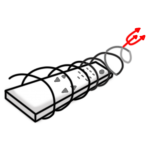 The broader themes the show wishes to discuss, in an age where corporations are getting more powerful with each passing day (hey, corporations are people too!) and the debate over the advancement of technology and its implications are heavy and will allow for it to expand its larger mythology and character motivations.

The first two episodes focus solely on Keira and Liber8, the writing and the action is tight and perfectly paced, but it all falters in the third episode, when the focus shifts away from them and into procedural territory. Liber8 operates around the edges of the episode and the show loses all the steam its beginning had given them. This will clearly be the challenge for the show. To create longevity, the show will have to integrate CoW into the larger mythology of the universe, but this is something very few shows have been able to do well. If Continuum manages to do that well and find its footing, it has all the elements to rise above the so-so sci-fi offerings of the summer.

Maryam “MP” Piracha is the Editor-in-Chief of The Missing Slate and, as a fellow couch potato, makes an occasional appearance in Shazia’s column, usually in parenthesized italics.

It ain’t working for Men at Work

During the past few years, we've seen comedy evolve and redefine itself over and over again. Mocumentaries, single-camera, dramedies have...