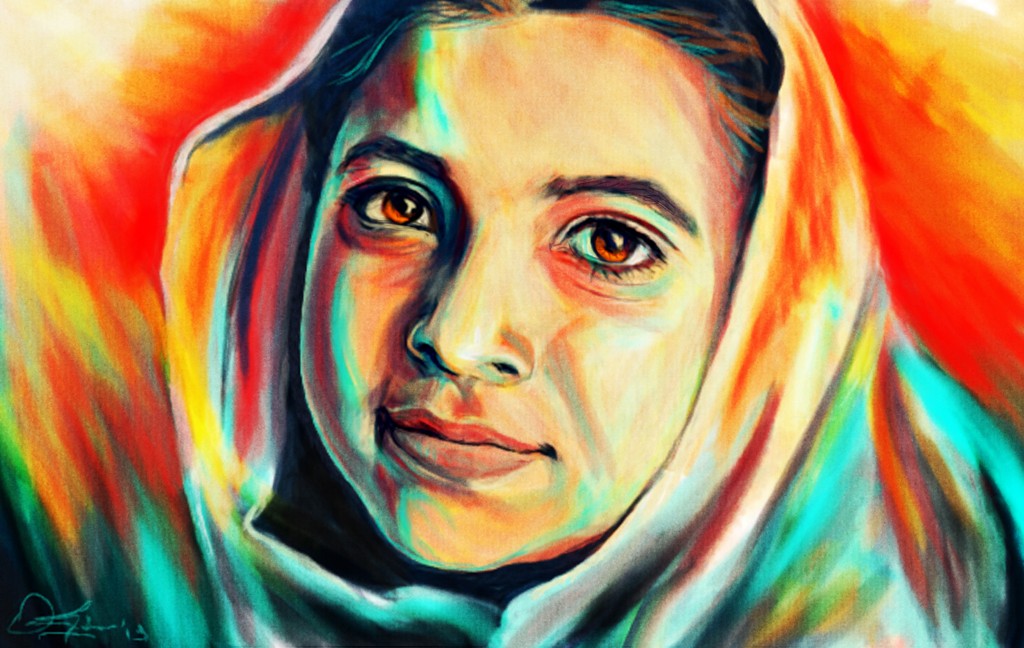 When I was a little girl, I read about a Pakistani scientist named Abdus Salam. My science book said he was the first Muslim to win the Nobel Prize, and my first thought was, “Babuji?!” My paternal grandfather, babuji as he was called, passed away when I was a toddler, and all I knew about him was his name. Unfortunately, my Babuji may have been one Abdus Salam, but not the Abdus Salam.

Perhaps it is better to have a nobody for a grandfather than a great scientist who was never honoured in his lifetime, or even allowed to rest in peace. What do Dr. Abdus Salam and Malala Yousafzai have in common? They are the only Pakistanis to have won a Nobel Prize, and both were unable to live peacefully in their own country, among their people. The former because he was an Ahmadi Muslim, and the latter because no one wants to believe that a young girl can have a fiery spirit and an indomitable will.

Who Malala is and what she has achieved is a tale unneeded at this point: Google is your friend. It is more important to explore the reasons why she is so severely disliked in Pakistan. The anti-Malala camp is divided in their opinions, a profound dislike of an amazing young girl their only common factor.

Put on your tinfoil hat, because the aliens funded by RAW and the Jews are coming, all because Malala helped them out. These are the nutters who believe Malala is the result of some ridiculous Zionist conspiracy to destabilize Pakistan. How? I suppose in a patriarchal society, the threat of a female telling the world that one child, one book, one pen can change the world is too great. We can’t have young females filling up their heads with crazed notions of education after all. Jokes aside, the conspiracy theorist is very real. They could be your childhood best friend, that interesting new friend you made at university, that seemingly “liberal” friend who quotes Ghamidi, or your horribly bigoted aunt. The conspiracy theorist is not an uneducated, unenlightened pitiable fool and that makes them all the more dangerous.

Selective compassion is not genuine empathy.
The Edhi and Nabila Camp

These people think education isn’t that important if it comes at the “cost” of telling the world that things in Pakistan, while not failed state material, aren’t all that positive either. These people believe that you should only get global recognition for happy shiny things like living a life helping others, or the not-so-shiny things such as losing a relative in a drone attack. Why do we need to compare one tragedy with another? Isn’t it terrible for a little girl to get shot in the head for daring to speak up? Isn’t it also terrible if a little girl sees her grandmother die before her eyes from a drone attack? Selective compassion is not genuine empathy. To say that it is “a black day” if Malala Yousafzai wins the Nobel Prize is hate-mongering. And if you do so from a position of power, it is an abuse of the influence you exert on public opinion. As for Edhi, he really doesn’t care because he’s happy for Malala.

In 2013, the average liberal Pakistani learned that George Galloway existed because he criticized a prominent political party that this writer will not name out of sheer terror. (Bhai, hum aap k saath hein!) 2014 seems to be the year of Arundhati Roy. In an interview with Laura Flanders, Roy talks about the “Great Game” and how governments and political powers have attempted, and succeeded, in using influential figures. While praising Malala, she also points out that despite criticizing America’s wars and drone strikes, she is still young and can’t be faulted, but points out that we can stay aware of political machinations.

Roy isn’t saying anything that isn’t true, and she provides a solid critique of how the Nobel Peace Prize has become a political tool — Zionist war criminals and Obama, King of Drones gets a Peace Prize, really? But she expressed support for Malala as well, something people don’t seem to comprehend. In a 2013 interview with The Herald, Roy said, “Over the centuries, women have risen up to fight against all of this in a myriad different ways. I think Malala Yousafzai is among those many remarkable women — a beautiful and significant milestone in the history of women’s struggles.”  Like Edhi, Roy is supportive of Malala and her fight for education, but of course the critics just need someone who makes them look marginally intelligent. “Oh Arundhati Roy criticized Malala too you know, oh dahling, you don’t know who Arundhati Roy is, why, she’s the one who wrote that book you know, about the gods that rule over small things like insects and plants and the like! Such a fascinating creature, she is.”

Some Indians are angry that we stole their thunder, but whatever guys, this whole Indian/Pakistani antagonism is so 1999.

The “What Has She Done?” Camp

Let’s see. Malala Yousafzai braved the odds to educate herself, along with her friends. She wrote, at a very young age, about her experiences living under the Taliban despite knowing she was risking her life doing so. As far as her words being edited in the BBC diary are concerned, is every journalist doing nothing with their life since their work is refined by sub-editors? Furthermore, Malala was also campaigning for education long before she was an international figure or even when the average Pakistani knew of her existence. Nighat Dad, founder of Digital Rights Foundation met Malala when she was just in her mid-teens, dressed in her school uniform and a black chadar covering her head. “She came to our event straight from her school. All the way long from Swat to Peshawar,” Nighat says, and recalls getting goose bumps when they met. “Malala was too young but the spark in her eyes was beyond words,” according to Nighat and she was awed by the sense of determination radiating from such a young girl. Nor has she changed since then; the social justice she campaigns for isn’t new or a  gimmick, but something that adults saw years ago in a young girl. “Everyone wanted to talk to her and the sweet little girl was finding way to treat everyone equally.”

Since her shooting, Malala has gone on to exploit the West’s white savior complex in order to raise funds for education world-wide, push for the return of abducted girls in Nigeria, told Obama to his face that drone strikes suck balls. Also?  She’s a socialist who knows what the word means, unlike my jiyala ex-boyfriend who ridiculed my lack of political knowledge but was a “PPP socialist” who couldn’t even define socialism. How many teenagers do you know that are intelligent enough to be able to recognize capitalism in its true, oppressive form, and align themselves with a leftist philosophy in order to change the world for the better? Not many, I’m guessing.

What were you doing with your life at the age of fifteen?

It’s a pity that Pakistan just doesn’t seem capable of learning any lessons. We should be honoured that Malala emerged from our country, because we know better than any white man, better than any South Asian, what Pakistan is, and what life here is like. We know, better than anyone else in the world, how resilient you have to be to emerge from a life under the Taliban and not give up fighting for your rights, or the rights of others. Instead, we choose to hate and criticize a girl who symbolizes our hopes for a better Pakistan for our children to grow up in. We should be happy that the Western world can see for itself the brutal conditions we, and other parts of the world, live in, because the more fortunate parts of the world need to check their damned privilege and start making genuine efforts to bring change. Instead, we call a brave young girl a puppet, delegitimize her cause and opinions by dismissing both on account of her age, and criticize her for “presenting a bad image of Pakistan.”

In a Facebook status by Ammar Rashid, a member of the Awami Worker’s Party (AWP,) a leftist party that has made actual efforts to empower the working class of Pakistan, Ammar writes, “The fact that global imperial elites have attempted to co-opt her and whitewash their own role in creating the nightmare that engulfs the region, does not in Any Way diminish the extent and worth of her achievement.” To clarify my objectivity here, I’m not personally acquainted with Ammar Rashid nor am I a member of AWP; I just happen to admire both.

Of course there’s no denying that the awarding of the Nobel to a Pakistani and Indian is political in nature, and Malala honours the prize by accepting it. A prize that was given to warmongers carries no honour with it. But our brave sister is getting recognition worldwide, and she deserves it, she earned it after what she has been through. But let’s make one thing clear: Malala does not need a Nobel Prize to continue her struggle for education, the struggle she started in obscurity. She deserves recognition, yes, but even when she didn’t have it, she was campaigning successfully for the right to education because her strength does not come from any awards or a celebrity status. Her strength is entirely hers and hers alone. Perhaps that is why she’s hated: because hers is a strength most of us lack.

Ghausia Rashid Salam is a Contributing Editor for Articles.

As a special web anthology, The Missing Slate presents the work of its first fiction writing workshop graduates.