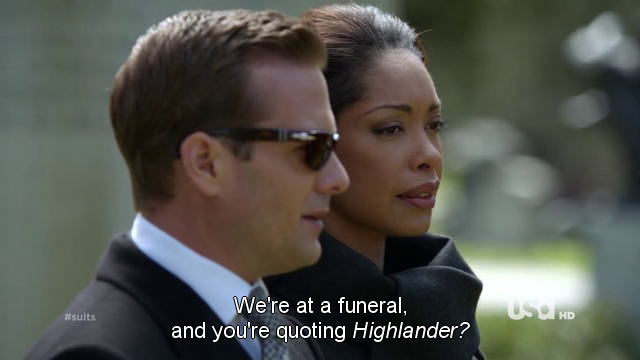 on, my gripe with it still remains the same: Harvey Specter. His character’s definition continues to paint him as a self-serving man with very few redeeming qualities (actually more glimpses of redemption at the end of the episode sometimes as opposed to qualities themselves) and the way he conducts himself makes it very hard for me to root for him. He isn’t the big bad, but he’s put a lot of people in danger due to his actions and we have no backstory to allow us to understand his motivations.

Harvey says one things and his actions illustrate something entirely different. If Harvey is as invested in Pearson & Hardman as he says he is, why would he commit major fraud which could get Mike sent to jail, him dis-barred and the company open to a million lawsuits. Mike is not a lawyer (he’s taken the bar exam, though probably not for himself, to be practising law in most states, you must have attended an accredited law university), yet he’s been allowed to represent a client at court. There is no substantial reason for why Harvey takes such an interest in him; they both belong to different backgrounds (Harvey’s always lived a privileged life*) so it’s not shared circumstances which has brought them closer, he’s not particularly interested in Mike’s well-being. Intelligence is a flimsy base to build the entire relationship on, the writers need to work on figuring that one out.

Related | Is The Newsroom Worth the Hype?

Jessica knows Mike’s secret and is probably the only one who reacts logically. As smart and loyal as Donna is, even she has never gone on record saying hiring Mike is a bad idea. Jessica is not someone who makes rash and uninformed decisions, she has Mike investigated and although the cover created by the MPDG holds up, the holes are still wide enough to drive Lewis’ head through them. She invites him to dinner and gets a read on him; and we get the details on why he basically sleepwalked into “becoming a lawyer” (“Because Harvey hired me” probably isn’t the answer she was looking for). Jessica wants him fired because his existence is nothing but liability for the firm and nothing really justifies him continuing at P&H.

Except the other half of Pearson & Hardman may be coming back for her and Harvey’s jobs. We learn that Hardman stole from the clients’ escrowe accounts to fund his mistress habit. Harvey and Jessica used that information to drive him out of the firm, but now that their blackmail leverage is dead AND Hardman’s come clean to the entire staff of the firm, they have their backs against the wall. Harvey’s loyalty to Jessica means he’ll help her fight Hardman, but his loyalty to Mike means he’s not going to fight without him by his side either.

* Edit: It has been brought to my notice that Harvey did not always lead a privileged life, he was in fact working in the mail room when he was discovered by Jessica and then sent to Harvard by her. Which begs the question, exactly what stopped Harvey from making that same smart decision for Mike? Stupid, stupid Harvey…

Just to add an important little detail: Rachel has been given a secondary storyline following up from last season's paralegal / lawyer string. She may just make it as an attorney yet! This all comes in the third episode...

Film Critic Jay Sizemore shares his take on the most quotable films of all time.

Pretty Little Liars: In the Eyes Abides the Heart

A hand-crafted love letter to Mona, formerly known as "A" on Pretty Little Liars