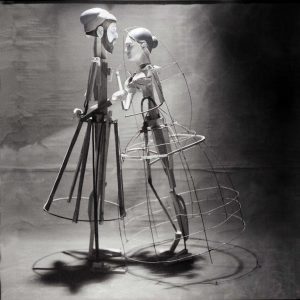 His laughter is glass in her breaths.
She coughs it up but cannot get them back: he keeps both on his bedside.

Emotion’s the biggest turnoff.
Not knowing they were medically induced
he married her for steady eyes,
lingering vowels, for,
in the library, her drawing of vinegary pens
over print. A scholar’s reserve,
not with everyone do I share myself.

Her corset is an artifice,
two-thirds Prozac,
but she compensates in Ann Summers,
something lacy like a shoe.
He would take histrionics over untrussing
this prawn.

Unpersoned, shrill and stagnant,
she reduces him to a thrillseeker.
Hitting her is giving a baby honey.

A flight she can’t afford from home,
she craves the surge of Elgar’s Nimrod,
gutjolt of roadkill,
something to teach her living.

She’s drowning in the spit of his shower:
she wipes windows into glass
to check the lock.

Hannah January is from Northumberland, and studies English Literature at the University of Birmingham. She has previously been longlisted or commended in the Foyle Young Poet, Christopher Tower, and Timothy Corsellis competitions.

Poet’s note: The title reflects the inspiration behind this poem. I was reading a conversation on an international forum, and someone offered some advice to a person who’d helped them previously: “I came to go back the favour”. That phrase made me think about cultural hurdles in a relationship, things that are wider even than language.

“She gathered them,/ pegged them to clotheslines/ to crisp in the sun, ordered by size…” Poem of the Week (November 24), by Elosham Vog.

"Wake me up/ when it’s over, the idea that/ we are separate from the world/ in which the soul comes...