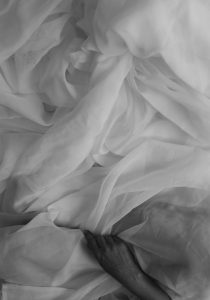 It always strikes her as a little odd, when she waits in line for coffee or stands at the bus stop. It isn’t every day that she sees this woman with tired blue eyes pushing a stroller, but she runs into her fairly often, whether it’s at the grocery store or leaving the mall. There’s nothing odd about a woman who looks to be in her thirties pushing a stroller, but she stands out, for there’s always a blanket over the child inside. As soon as she sees this woman, she starts to shift her weight from foot to foot and check her phone for new messages more often than necessary.

She fans herself with a folder of papers from work, confidential banking documents her boss would probably rather not see her using to cool herself. She can understand why there’s a blanket over the carriage this day, it’s blazing hot and there’s not a cloud in the sky to grant reprieve to the city below. She’s fairly certain the small amount of her chest peeking out from below an unfastened top button is going to get sunburnt and her skin is that of a twenty-something year old woman. For a small child, it would be horribly scorching.

“Do you think it’s odd that woman always covers the stroller?” she asks, looking away from her coworker to nod toward the woman.

Her coworker, another young woman toting a briefcase and tight but professional attire, glances over before shrugging. “Not really, it’s like the pits of hell today.”

She hands her folder and briefcase to her coworker so that she can pull off her blazer. She earns an unamused look, but her coworker still takes the briefcase without question. The blazer is just too hot to keep on, but her gaze keeps getting drawn to the woman as she frets with the covering over the stroller. The woman makes sure every last little area stays covered.

“Do you think the baby is getting enough air?” she asks as she slings her blazer over her shoulder.

“I’m sure, it looks like a shawl is covering it. Lots of little holes in those.”

“I always see her and the baby like that though.”

The bus arrives and it ends that topic of their conversation. Her coworker makes a comment that she’s being too nosy and seizes the chance to change the topic. She supposes that her colleague is correct and boards the bus without looking back at the woman.

When the mother passes her and her coworker en route to the area of the train dedicated to strollers, she feels dust tickle her nose and sneezes.

The milder weather of fall makes the cover over the carriage seem unnecessary when she runs into the woman, this time at a convenience store located on a city street corner. She grabs an energy drink and watches as the woman looks at the candy bars and asks with a sweet voice if her child would prefer milk chocolate or white chocolate. She watches as the mother peeks under the shawl covering the opening of the carriage and smiles. She can’t help but tilt her head a bit to try and see the child inside, a dark curiosity sweeping over her like dust is swept under a rug.

She’s jarred when the cashier looks at her with an exasperated look and she hurriedly rushes up to the counter to pay for her purchases.

“I said next customer,” she says, looking impatient as her hand waits expectantly on the cash register.

She was so busy staring that she hadn’t even realized when the customers ahead of her completed their purchases. She can feel several people in line behind her glowering at her for wasting their time, but when she chances a last glance over at the mother, the woman has yet to enter the line and thus isn’t paying any mind to her staring.

As the temperature drops, her blazer isn’t enough to shield her from the cold when she’s waiting for the train into the downtown area of the city. She has been forced to don an extra winter coat over her crisp white shirt and jacket. To make her daily work attire even more stiff and uncomfortable, if she wants to wear a skirt, she has to wear tights under it to keep her legs from freezing.

She sees the mother again, pushing her stroller up to the token machine, her gaze drawn to this sight as it always is. While most mothers bundle their children up in cute, colorful hats, gloves, and scarves, this woman simply covers the opening of the carriage, just like she always does. However, the woman’s money isn’t accepted by the token machine and the conductor waves her over to his station.

She starts to bring her stroller along with her, but the area in front of the conductor’s box is rather small and she’s forced to put the stroller around the corner of the protruding room. From this angle, the mother can still see the handles of the carriage parked next to the conductor’s area, but only this and nothing more.

Unable to contain herself, she checks how many train tokens she has and determines there’s enough for a little backtracking. She rushes over to the exit turnstile and steps through, effectively wasting the token she’d already spent to get onto the platform, and walks toward the carriage.

The woman seems to be having a disagreement with the conductor, though she doesn’t get angry, she simply looks upset and fragile. The sight of the mother looking so emotional makes her feel sympathetic, but she walks past both the mother and the conductor’s box as if she has important business in that direction.

Once she’s safely out of sight, she abruptly stops and creeps over to the stroller. She reaches out to lift up the shawl hanging over the opening, but hesitates for a moment. Her stomach churns but she isn’t even sure why she feels so much anxiety about lifting up some fabric to look at a toddler.

She takes a deep breath and holds it, and she picks up the fabric and peers inside.

What she finds, in fact, isn’t a baby at all. There’s only a wrapped up blanket inside, but certainly no child.

She blinks in confusion at the sight of the empty stroller. Momentarily, she feels relieved that there isn’t some poor child in there being cooped up for no good reason. This only lasts for the briefest of seconds since it brings up so many other questions, such as why the mother would push an empty stroller, and what lay hidden in the blanket.

Whatever is wrapped inside, it’s far too small to be an infant. She listens carefully to the disagreement between the mother and the conductor, something about not being able to issue a refund, and decides to press her luck even more.

It only takes a quick pull of the wrapped fabric to make it unfurl. A metal container plops out and rolls to a rest upon the cushioned seat. As it falls, it does so with the same gentleness the mother always has in her voice when addressing her child.

The object revealed is a silver urn with the name Marianne inscribed on the side in soft, gentle curling letters.

Leigh Fisher lives in New Jersey and works as a help desk technician by day, but is a writer around the clock. She is looking begin a doctorate program in literature and has been published in two literary journals, Seascape and Stockpot. She gravitates toward speculative fiction and writes a mix of novels, short stories, and poetry.

Poem of the Week (August 6), by Richard O’Connell

Spotlight Site: Wait But Why

"Its secret sauce is, I think, optimism. A better world is available to us if only we can do the...