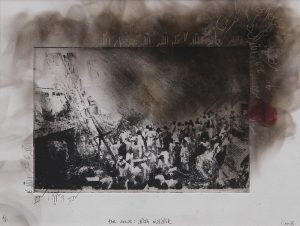 An unholy stench announced the rumors were true. Something extraordinary had found its way to the dock at Karachi Fish Harbor.

Now, those of you unfamiliar with the harbor, don’t get me wrong. The place always stinks. And every morning, when the returning boats scythe through the flotsam, so thick you can’t see the water, hordes of sweaty fish mongers gather to bid on the night’s catch. But by the time I happened upon the scene that day, it was already mid-afternoon, the sun high in a hazy sky and the odor beyond imagination. Impervious to the heat and reek, the dock was crowded with men, women and children — not to mention the hawkers who had followed them in, selling everything from balloons to sweets. One industrious soul had even set up a wooden, man-powered Ferris wheel that conjured shrieks of delight from every child spinning in its rickety gondalas. Smiles and laughter all around. It was like a mela.

Sure that there was a story there, somewhere, I approached a group of fishermen squatting like pterodactyls on their boat, sizing up the crowd from a distance.

The first to stand and respond, words whistling through his paan-stained teeth, was the youngest of the lot. “Haji Sahib…he’s a very rich fish dealer, saab… he bought a giant monster from some fishermen who work on Mohammad Jamal’s boat. Paid two million rupees. Sixty feet, at least. And twenty tons. It took a crane and three hours to haul it from the boat. One of the cables on the crane broke, even… Now, Haji Sahib is charging fifty rupees for people to see it.”

“It’s not a monster!” spat another of the men, no less brawny, no less red in the mouth with paan, but revealing himself to be considerably shorter as he rose. A luxurious moustache, curled at its ends, adorned his top lip. “It’s a giant catfish, sain,” he announced with the authority of a professor, twirling his moustache. “No more than forty feet and ten tons. And Haji Sahib paid one million and is charging twenty rupees.”

Throwing down his cigarette, a third stood to protest, “What do you mean catfish, chokra?” He was considerably older than the rest. I don’t speak Sindhi, but I believe he hissed through his yellow, widely gapped choppers, “Have you learned nothing I’ve taught you? It’s a shark. And it’s about five-six tons. Haji Sahib paid five lakhs. Mohsin is right about one thing, though,” he turned to me and said in Urdu, “It is forty feet, at least.”

“The man who pulled it from the sea was a Bengali,” a forth piped it in, not bothering to rise from his haunches or even glance in my direction. “Only a Bengali could catch such a fish.”

“Baluch have been catching such monsters for generations!” the youngest man proclaimed.

“Sindhis, too,” the others chimed in. “In fact,” one continued, “we caught one just as big some years ago, alive. It struggled. But we sold it without anyone coming to see.”

“God forgive you for lying,” the old man rebuked his younger colleagues in Urdu for my benefit. “That fish wasn’t alive, saab. They tell us not to catch them since twenty-thirty years, at least. Even when they get caught in our nets we release them if we can. Now, I can’t say that Bengali did the same, but…”

“But, Baba, you were there… We were off Sonmiani Hur and…”

The man who had been selling tickets came bounding in, looking worried. “Police have come, saab,” he informed his boss. “They say this fish belongs to the government.”

“Shh, idiot!” he decreed in Sindhi.

The younger man would not be silenced. “For hours I fought with my own…”

I left them to argue, hoping to find this Haji Sahib. He would undoubtedly know more and a gaunt fellow flashing a gummy smile as he furiously sold tickets at the edge of the crowd was a good place to start. I managed to extract directions to his boss.

Haji Sahib was seated at a desk at the back of the still blood and gut strewn auction hall. For some unknown reason, he turned out to be exactly as I had imagined him: in his fifties, thinning hair, a well-groomed and hennaed beard, round in the belly despite a billowing shalwar-kurta to obscure his true shape. He looked like the maulvi who taught me and my brothers Quran when we were children. A significantly thinner and older man — perhaps his bookkeeper — sat beside him counting money as Haji Sahib looked on vigilantly, so occupied by his task, in fact, that I had to ask for him by name twice before he looked up.

“Who did you say you are?” Haji Sahib at last enquired.

“I am a journalist. I just wanted to ask about the fish?”

“Yes, yes. Others have already come…even a gora. Like I told them. I bought it for two lakhs from Muhammad Jamal. His Bengalis brought it in this morning. I’m charging twenty rupees for people to see it. Adults only. Children for free. I support education, you know.”

“Yes, I’m sure… And where is Muhammad Jamal and his boatmen? Can I meet them?”

“God only knows. May be they went back out to sea.”

“Can I photograph the fish?”

But before I could respond a tremendous hue and cry issued from the crowd outside. The man who had been selling tickets came bounding in, looking worried. “Police have come, saab,” he informed his boss. “They say this fish belongs to the government.”

“What? What? It is mine. Gandoos. They probably just want a cut,” he fumed, his silver capped molars grinding as he struggled to his feet. I followed quietly behind as he and his employees strode out into the blinding sunlight, Haji Sahib calling out to the man with stripes on his uniform. “Inspector Hashim, bhai. Nothing to worry about. We can arrive at an arrangement.”

“Salaam, Haji Sahib.” Inspector Hashim, a man no less rotund than the fish dealer, though more definitively so in his tight uniform, reached out with a crooked smile. “Put away your money. There is nothing I can do. The city commissioner is coming and he is bringing a scientist. They think this may be a very rare fish. Stop selling tickets and cover it up, I beg you.”

“I bought it,” Haji Sahib protested, spitting betel nut juice on the ground a little too close to the Inspector’s feet for his liking. “It is mine. I can do what I want with it. One-two more days show – for education – and then, chop, chop…meat, fins, oil are going to Sri Lanka. The deal is already made.”

“I don’t know anything about Sri Lanka. You talk to the commissioner when he comes, Haji Sahib. Until then, my orders are to disperse the crowd.”