The short story ‘Mushroom Weather’ was written in the 1950s and tells the story of a young man who decides to take a boat trip across the River Tagus in order to shake off his feelings of boredom and listlessness, only to find that this ennui accompanies him on the journey, with fairly disastrous consequences. I chose to translate this story after finding myself entranced by the tone and imagery, which I feel really capture the sense and frustrations of a wandering mind. I particularly enjoy Bessa-Luís’s earthy descriptions of mushrooms and fungus, and her subtle evocation of myth; men appear to sprout from stones, there is a river crossing, mentions of a young David and of river nymphs. The skill with which these disparate threads are interwoven marks Agustina out as a writer whose extensive body of work is crying out to be translated into English. 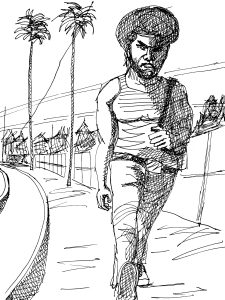 A weak south-southwesterly wind; overcast skies. Mushroom weather. Organic matter covers walls and ditches — black mould, sludge, fungi, stubborn lives possessed of a vegetable vitality, growing wherever there is decay and ruin, in the doleful folds of the earth, in putrid crannies, in stagnant puddles edged with mud. Like mushrooms, men appear to sprout up from the street, ooze out of the stones, grey and ochre and verdigris, their faces empty, their hands like roots heavy with water.

L was walking slowly through the Baixa, heading towards the river. An unsettling day, seemingly disconnected from the passage of time; an atmosphere similar to certain formless dreams that leave the mind weary, the memory swept clean; teasing little flurries swirling here and there around dwindling pinnacles of sand. The statue of Dom José with its sad, leprous hue; launches and barges bobbing on the high tide; the soft splash of waves lapping against the quay. The whole mood of that afternoon, imbued with a malignant, creeping expectancy, an unnerving stillness, an unrelenting sameness, was somehow seeping into L’s being. He was a young man, still a student, the sort of person you might describe as original, that is, someone destined to crystallize into vacuous elegance, at the expense of his own personality. He had been wandering about aimlessly all day, beset by tedium, in that frame of mind which seems to reduce all creatures to the same condition as unthinking organic matter with only vegetable instincts. Not that he hadn’t put up some resistance — for it was resistance to that exhaustion of the mind and the senses that had prompted L — on that dull, oppressive, and yet extraordinarily fluid afternoon — to seek out the kind of disquiet that might rouse him from that state.

The bank of the river was slippery, viscous, and the whole watery expanse seemed to swell and throb with the pressure of the waves, green and leaden, giving off a smell of fermentation and corruption, the tenuous, subtle smell of the sea. Without thinking about it, almost as if he were taking part in a kind of somnambular ritual, L set out for the other shore. But the other shore was equally glum and lifeless. The picturesque, the thrilling and the fascinating had joined hands and eloped, along with their cortège of emotions, all garlanded with daisies. O winds, unleash your powers and roar above the elms, the chimneys, the river! Fill the silence of this dull, sultry afternoon. Leaves, spread yourselves like auburn wings! Topple the clouds like pillars of plaster, send forth vast fiery flowers to illuminate the river bank. Stand the waves up like riders, with foam for bridles; make the willows bend beneath the howling gale, vibrating like lyres. And may the Nymphs of the Tagus sob and shake their green locks, as they slip through the cold cloister of the waters, lamenting their dead poets…

He decided to go back. It wasn’t a particularly busy time, and the grubby little ticket booth, with its bars of flaking paint, seemed very much abandoned.

“Single, please,” said L, placing the coin on the counter. He waited, taking in his surroundings as if from a distance, completely lost in thought. When he turned back to the booth, the coin was gone.

“Where’s your money?” insisted a voice from inside.

He’d been robbed, but even worse was the memory of that sour, peremptory, almost sneering voice. He’d been deceived, like some fool, some dimwit ignorant of the wiles of pickpockets!

“I’ve already paid. I put the money right there.”

The voice coming from inside the booth had a blunt, unwavering tone, vaguely conciliatory. All that could be seen was a gnarled pair of hands, with swollen veins and black-rimmed nails. Of the coin placed on the counter — not a trace. The rotten thief! L rooted angrily about in his pocket and paid again, filled with a mixture of resentment and embarrassment. But the incident had ruffled him. “The thief! The cheat!” he kept muttering to himself on the return journey. He’d been robbed, but even worse was the memory of that sour, peremptory, almost sneering voice. He’d been deceived, like some fool, some dimwit ignorant of the wiles of pickpockets! As if he were a mere nobody. One of those individuals bruised by life, with no fight, no drive, ready simply to surrender to bad luck, failure, even ruin. The thief! The cheat! Such a thing had never happened to him before. Then again, the man hadn’t dared to face him. Hadn’t met his deep, analytical gaze, hadn’t even seen the cut of his jaw, the line of his lips – the restless lips of a young David, persuasive, always ready with the inspired word. He hadn’t even experienced his discreetly ironic turn of phrase, his robust response. No, there had been only that anonymous contact, that predatory gesture. The despicable, uncivilised crook; what mean trickery; what shallow opportunism. Cruel fate, wicked sprites let loose on the stagnant air; foul stench; heavy skies, seagulls grazing the water with trembling pointed wings. The rocking stern, the prow raised majestically above the waves. And that voice, cold, indifferent, even slightly mocking. He should have stood his ground, protested, made a real scene with fists and recriminations, a few spat-out teeth. Now that would have been grotesque. Grotesque.

With an irritated flick, L sent the ticket he’d been crumpling between his fingers into the river. The boat was just drawing up alongside the quay.

“Tickets, please!” said the inspector as the passengers disembarked. L managed to stammer:

“Did you now? So it’s a free ride, is it?” said the man, with a knowing smirk. “Well, do me a favour — go over there and buy yourself a ticket, all right?”

Mushroom weather. A weak south-southwesterly wind, overcast skies. Surrendering to the inevitability of that afternoon propitious only to organic and vegetable states, to mould and fungi, L — unresisting, resigned and mute — made his way over to the ticket office…

Agustina Bessa-Luís is a Portuguese novelist, short story writer, playwright, and essayist. Born in 1922, she has won numerous prizes, including both the Premio Camões and the Premio Virgílio Ferreira in 2004. She has written over forty novels, a number of which were made into films by the late great Portuguese filmmaker, Manoel de Oliveira. In spite of this, and of the fact that she is often regarded as one the country’s greatest living writers, Bessa-Luís has never been translated into English. Much of Bessa-Luís’s writing focuses on the inner lives and intimate conflicts of women, their attachment to mysticism and the sublime, and their sense of alienation in relation to the dominant masculine culture. Her celebrated 1954 novel, ‘The Sybil’, is often seen as a watershed for twentieth-century women’s writing in Portugal.

Victor Meadowcroft grew up at the foot of the Sintra Mountains in Portugal and translates from Portuguese and Spanish. He is currently completing an MA in Literary Translation at the University of East Anglia and working on ‘Lisbon Tales’, an anthology of Portuguese fiction set in Lisbon, in collaboration with translator Amanda Hopkinson.

"El-Siq says, be patient,/ persist for your eyes and feet/ to deserve this journey’s exhaustion./ The road will lengthen between...