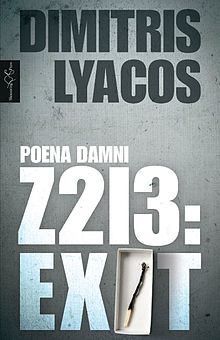 No life is left untouched by suffering. Every writer, then, is forced to face — sooner or later — the question of how to represent suffering on the page. If we choose not to adopt Adorno’s view that producing any literature at all after the horrors of Auschwitz is barbaric, representations of extreme suffering tend to follow one of two approaches: unadorned realism (typified, perhaps, by Primo Levi’s dry but enormously effective ‘factory-report’ prose in ‘If This Is a Man’) or a mode of oneiric surrealism, in which horror is forced beneath the surface of consciousness only to emerge again in new and increasingly nightmarish forms. Dimitris Lyacos’ ‘Z213: Exit’, simultaneously the first and the final volume of the ‘Poena Damni’ trilogy (the first book of the sequence, but the last to be published in the original Greek), is an example of this second approach.

Interestingly, Lyacos’ own view, outlined in a conversation with The Bitter Oleander Magazine (Vol. 22, No. 1), is that

“we are forever severed from the Real by our entrance into language. We insulate ourselves within language and the Real only gets to us, surprises us, through the gaps, it oozes through the seams. One of our meetings with it is, indeed, death, but since we have locked ourselves inside since childhood, since language, any appearance of the Real will be traumatic…”

Philosophically, this implies a rejection of literary realism, since any “entrance into language” becomes ipso facto a severance from “the Real”.

As defined by Mediaeval Scholasticism, ‘Poena Damni’ consists of the complete (and undoubtedly traumatic) separation of the soul from God. According to the rather bombastic seventeenth-century Puritan Henry Greenwood, “This poena damni, this punishment of loss is more bitter than the pains of hell, yes, worse than a thousand hells.”

Lyacos’ contemporary interpretation of these “pains of… a thousand hells” opens, “past midnight”, under cover of a purgatorial darkness. We meet the narrator in mid-sentence, towards the right-hand margin of the page, and — in a style vaguely reminiscent of Beckett — exist thereafter in a more or less uninterrupted state of dingy uncertainty. “The Real” is permitted to intrude on the opening page in the form of a reminder that “most of us… would die at some point all of us me too and then those who believed used to cry out others did not.”

The ‘exit’ of the title may or not be the narrator’s (or narrators’) exit from a camp or detention centre, which may or may not be ‘Z213’ (“Two letters the second Z, I think, and then some numbers. Why do I remember this? I don’t even remember where I saw them written.”) The narrative is fragmented by a series of passages found in a Bible, “blank here and there a few notes, somewhere else parts written clumped together, could not make them out.” Much of the imagery is mythic or Biblical (with phrases drawn directly from Old and New Testaments, in addition to various ancient Greek sources), culminating in the sacrifice of a lamb with the offal drawn “still hot” out of its twitching body.

The narrative is fragmented and nightmarish, existing in a state of almost-perpetual darkness, but perhaps necessarily so

The ‘Poena Damni’ trilogy is the meticulously-edited result of more than thirty years of writing and rewriting, beginning with a poetry collection Lyacos published at the age of 18. ‘Z213: Exit’ is now in its second revised edition, and it seems likely to continue undergoing further revisions. Lyacos’ readers must be reminded of James Joyce in conversation with Max Eastman: “The demand that I make of my reader is that he should devote his whole life to reading my works.”

(If the trilogy’s demands on the reader seem heavy, the demands on the translator are still heavier, and this seems an appropriate juncture at which to acknowledge Shorsha Sullivan’s untiring efforts to transform Lyacos’ work into English, incorporating fragments from myriad sources.)

How to read ‘Z213: Exit’, then, assuming you don’t have a whole life to devote?  Firstly, it seems important to be aware of the entire trilogy as a form of language-game (or sprachspiel). “Literature,” as Lyacos defines it in his Bitter Oleander interview, “is a response within the realm of language, another language game…” As with Wittgenstein’s language-games, it cannot be fully representative of reality. If we agree that language is a form of insulation from reality, aspiring to write a realistic depiction of suffering becomes nonsensical. Instead, the writer gropes through the dark with signs and symbols: at certain moments, the Real “oozes through the seams”.

If ‘Z213: Exit’ could be reduced to a single image, perhaps that image should be the searchlight cutting through the darkness: “And the flashes right in front of me through the windows from one to the next like a searchlight turning around seeking me out. Here, in a flooded pit full of bodies…” Alternatively, a flickering candle — candles are another of the book’s recurring symbols, fleeting illumination against a world in which “Every time you get up you expect daybreak, it is night, you sleep wake it is night… As if you were pursuing a light which recedes with the speed you advance.”

The narrative is fragmented and nightmarish, existing in a state of almost-perpetual darkness, but perhaps necessarily so. It’s tempting to read the entire ‘Poena Damni’ trilogy as a response to the unremitting horrors of the 20th-century, and it’s hard to avoid associating the camp, the soldiers, and the guard towers with the disturbing Second World War images that should now be part of the collective subconscious. But Lyacos’ insertion of Biblical and mythical motifs suggests a far broader project, covering all human history. ‘Z213: Exit’ can be read as the first volume of a postmodern epic.

Like other postmodern texts, the book revels in its willingness to defy genre. Simultaneously a novella, a poem and a journal, ‘Z213: Exit’ is also a distinctly Borgesian maze: in its own words, “the passages of the maze all lead again to the same point which does not exactly coincide with the exit.” Any readers attempting to traverse the maze will find ample rewards for their efforts.

“It has taken me a long time to believe that writing for myself is a legitimate way to spend the day.” Mary de Sousa, The Missing Slate’s Author of the Month for February, talks to Casey Harding.

Open Immigration Has Never Been an American Value

"Immigration policy in the United States has always been prone to xenophobia and racism." Constance A. Dunn dispels the myth...