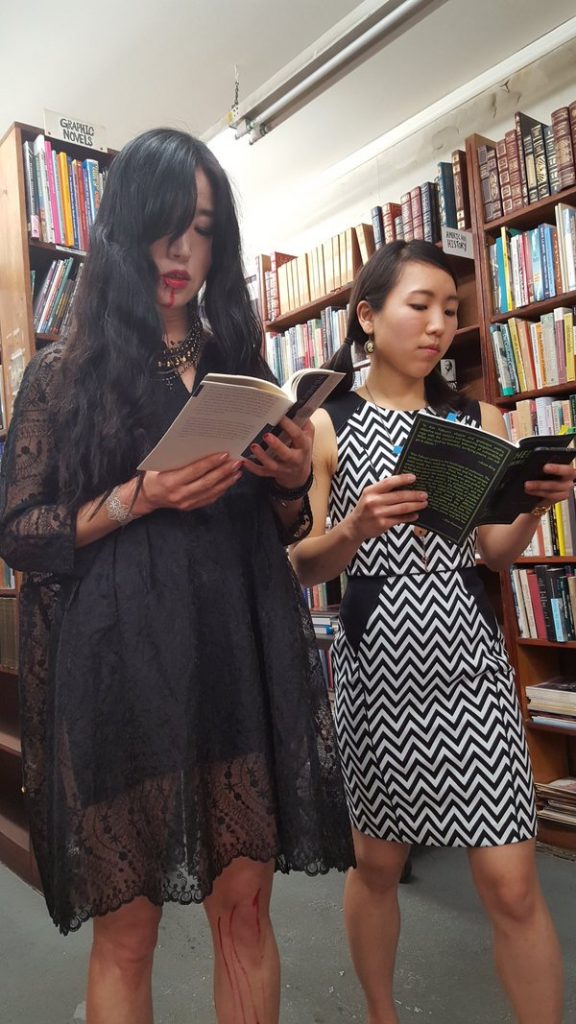 Kim Yideum is not afraid to speak her mind. One of South Korea’s most striking contemporary poets, she has published five collections and a novel and had three poems included in The Missing Slate’s ‘Modern and Contemporary Korean Women Poets’ online issue. In this instalment of our Poet of the Month series, she talks to Katy Lewis Hood (via translator Ji Yoon Lee) about the darknesses of writing, the significance of gender, and the need for ‘swagger’.

I believe female writers and male writers not only write differently, but they also engage with the conceptual/language system differently from one another. From the beginning of their lives, women are placed under different rules and boundaries, and have different experiences in their engagement with the world from that of men. Men are privileged to be born into the language system that is built with the logic of patriarchy; through that system, a male writer can easily position himself to be logical and high-browed, flaunting the depth of his abstract thoughts. Meanwhile a female writer needs to fight to build her own language against the default system. I’d say a male writer writes after philosophical contemplation and meaning-making, while a female writer writes with the language of her body—her womb, tits, tears, blood—and that very process is part of creating meaning. She, perhaps, is always writing with the language of the body.

In 2006, Don Mee Choi wrote of the scarcity of feminist criticism on Korean women’s poetry. Given that you’ve written your own thesis on Korean feminist poetics, how do you think this has changed in the last ten years?

I am completely on board with Choi Don Mee on that. When I wrote my dissertation ‘Investigating Korean Feminist Poetics’, Korean Academia didn’t respond favorably to it due to its topic. Feminism as a school of thought and feminist literary criticism are often dismissed, described as outdated topics. However, recently, there have been sexual assault scandals within the Korean literary world, so feminism is being revisited in that context. I am hoping this discussion of feminism won’t be limited to this particular situation, and that we will be exploring its scope within literary and cultural studies as well.

A poem such as ‘Fluxfilm No. 4 (Lesbian)’ is at once surreal, impassive, paranoid, funny, and grotesque. How do you achieve the right balance between employing multiple tones and registers and developing a distinctive poetic voice?

Binaries and monolithic thinking that reduce multiple facets of reality belong to legal documents rather than literature. Witnessing the plethora of terror and violence in the world, I have no choice but to regurgitate its sadness and fears. It’s natural that my writings are, as you described, “surreal, impassive, paranoid, funny, and grotesque” all at once. There are screams, madnesses, sneers all at once in my works. I have no intention to “balance” any of that. I’ve never been good at being level-headed to begin with, and I like letting the excesses, spills, distortions, fragilities, disappearances just be. When there are multiple voices in the poem, I’m not making conscious decisions to insert them—like the tone of my voice or my breathing, they just happen. There is another presence who interrupts, sometimes multiple presences who start conversations within the poems, and all I am doing is not erasing them. Also when I write poems, the “time-leap” of memory occurs, and I get possessed, fall into intense fluctuations. I’m having a hard time describing this. In short, I do not write poems for answers. I write poems to question. Poems are freedom, and I have never liked “write this way” instructions, and I actively refused to learn that.

I’ve never written a single poem with readers on my mind.

A lot of your poetry feels quite idiomatic and colloquial. Do you write with only a Korean audience in mind, or does the prospect of translation come into your writing practice from the beginning?

If I were to be frank, I am not squeamish about using colloquialisms, slang, or any type of language that is considered “un-poetic.” There are no meddling parents, no teachers, no police in poetry. I often de-stress when writing poems. I’ve never written a single poem with readers on my mind. Critics’ perspectives and such are not within my awareness. I started writing from rock bottom in the countryside (without any mentor or literary community’s support), and when I started writing, I thought, “Who would ever read my poems? Even if someone reads them, they won’t have anything nice to say. Regardless, I’m just going to write.” I made a habit of writing with that sort of swagger, writing as though I’m monologuing, or ranting. I don’t know. When I create I need to focus on the darkness of my interior and of language. Everything closes in, and I feel like nobody would be able to hear me even if I screamed. I had no idea my work would get translated. I met Johannes Göransson of Action Books at an international literary festival in Korea, and met Ji Yoon Lee, my translator, through him out of sheer luck. My poems are not easy to translate; I like playing with homonyms and slang. Lately when I write it occasionally occurs to me that I should think about readers and translation, but, in reality, I never really keep that in mind when I write.

In ‘Distribution Center’, a poem that addresses international adoption, you write that “this flotsam, which used to be some sort of organism, is quite political…” You’ve also recently spent time interviewing homeless people in Paris. Given the current precariousness of ‘home’ for many people worldwide, how do you see the politics of place and identity informing your work?

I feel like I am one of them: refugee, foreigner, and (to a certain extent) homeless. I live in a monthly paid tiny studio apartment in Seoul, and I have to move around a lot. I in no way belong to the comfortable middle upper class. I share kinship with the sensibilities of outsiders, such as sexual minorities, the homeless, or orphans. I had fun with the homeless people at Paris, talking to them, as though we’ve been friends. I despise the idea that the nuclear family is the very fabric of the society; I hate jingoism; I abhor capitalism’s violence and discrimination. I don’t want to have an identity. I am just one of the regular people who carry wounds and sadness with them, but try to recover and live. I believe in the dignity of ordinary life. When I write poems, that’s the only time my identity as a poet briefly emerges. I’m fluid, I move through the wall, the boundary, in the name of places just like water or a plague. With poetry, I’d call hell my home, my refuge, and my home country.

Editor’s note: On behalf of everyone at The Missing Slate, thank you to Ji Yoon Lee for her generosity and untiring persistence in translating Katy Lewis Hood’s questions into Korean and Kim Yideum’s responses into English.

Story of the Week (May 17), by Troy Blackford

Katy Lewis Hood interviews The Missing Slate's Poet of the Month, Kim Yideum, with Kim Yideum's answers displayed in the...