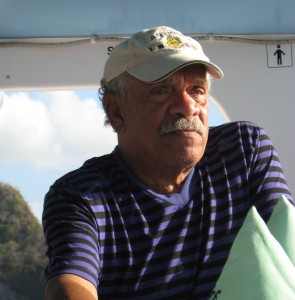 2010 was a terrible year for deaths in St Lucia. Of course we know that death is common — but there are times when folks say, “Basil busy.” 2010 was one of those years, especially for those of us here who have any sort of connection with the arts. We lost far too many. Derek Walcott’s sister, Pam, died in Barbados. At home, we lost Pat Charles, Athanasius Laborde, Sesenne Descartes, Sixtus Charles, Francis Tobias, Petronilla Deterville. My mum, Anne King. And too many more. I take a leaf out of Walcott’s book in naming them, as he names some of the many dead. And so it is marvellous to mark 2010 with a poetic manual that speaks directly, honestly, and clearly to issues of ageing, disease, bereavement, and death. White Egrets of course speaks also of love and joy, those odd flowers that manage to bloom all the more beautifully for being rooted in the awareness of transience that comes when death touches us closely.

One of the judges of the 2010 Forward Prize (a British poet, and I think his name is Hugo Williams, but I will take a leaf out of one of his unseen books and refuse to find out any more about him) was quoted as saying that he had first come across Walcott’s poetry when he (Hugo, I suppose) was eighteen, had found him (Walcott) a bit “florid” then, and never seen any reason to go back on that. I assume that Hugo and Co. did not actually read White Egrets. It would be hard to describe this writing as “florid.” It is so quiet that at times Walcott himself wonders whether his gift has left him, as some of his detractors seem to have suggested. It hasn’t.

This book has the power and the heft of one of Rembrandt’s late self-portraits. In the latter part of White Egrets, as he visits Amsterdam and “reflect[s] on how soon [he] may be going,” Walcott contemplates his own Dutch heritage —

Silly to think of heritage when there isn’t much,
though my mother whose surname was Marlin or Van der Mont
took pride in an ancestry she claimed was Dutch

— and wonders why he shouldn’t claim that ancestry “as fervently . . . as a creek in the Congo.” And with the quietness of that question, he refers to all the vexed issues of race and ancestry and the Caribbean attitudes to them he once ranted about in chapter nineteen of Another Life. Walcott is fully cognizant of why it is people feel he ought to suppress his Dutch ancestry and prioritise (if I may borrow a bureaucratic word) his African antecedents, but he has reached a point where he is able to look at himself squarely and paint exactly what he sees, without histrionics, without fuss, as Rembrandt was able to look at his every wrinkle and wart and put it down on canvas simply and honestly because it was there. Let others make of it what they may. We may have lost some of the fabulous ranting, but we are gaining a new sort of quiet, sometimes understated clarity. A dignity, even in sometimes embarrassing situations.

Take what he writes about his painting. He has sold paintings, once thought he “had done some more than tolerable,” but suddenly sees the work in his studio as having no “style, just a crass confidence.” He writes of their “scabrous surfaces” and how the grief at this loss of belief “cracked the heart and left it aching.” Later he tackles the same question in relation to his writing. He laments:

it’s still incredible the way
the gift abandoned me like a woman I was too old for,
I thought it was the violet that stood up to the armoured car . . .

— worrying now about what he calls “the coarse / exuberance that passed for wit.” In real life, Walcott’s raucous laughter and schoolboy jokes are an endearing exuberance, which has little to do with the careful, delicate choice of words in the poems. It is sad that anyone made him feel even briefly it might be true that his “gift has withered, that there’s little left of it,” and, if that is true, he ought “to abandon poetry like a woman because you love it / and would not see her hurt.”

“Perhaps desire moves in atoms,/ embedding itself in other hearts…” Weekend poem, by Jane Frank.