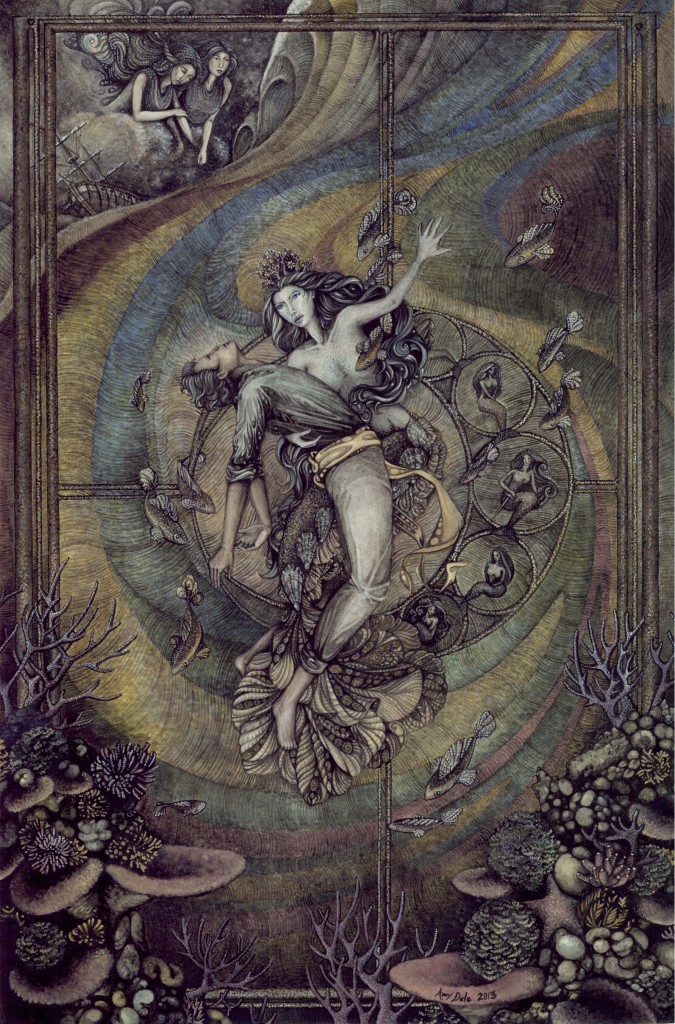 The Little Mermaid by Amy Dale

The silent battles between art and soul

(They can kill you, but the legalities of eating you are quite a bit dicier)

Here the terrain gets trickier; whether or not we admit it we often need our artists to have as much of a backstory as their art. There is an odd romance with misery in both the creation and appreciation of most art forms, perhaps especially, the written word. Shiny, happy people are somehow so… off-putting in this demographic. After all, where is their story? What is their story? Do they even have one? If they do, why aren’t they wearing it? It’s almost a betrayal to the form itself. Like discovering your favourite poem was actually meant to be a grocery list.

Truth in art has little value in production and is given far too much value post-production. Or is it the other way around? Does the purpose of art trump the pedestals it is placed on later in its shelf life?
This is a dangerous distinction, for both artists and their audience. It places the onus on misery and struggle to serve as some sort of cosmic X-factor in the production of great work. I am currently reading Woolf’s ‘A Room of One’s Own’ for the third time, Wallace’s ‘Infinite Jest’ for the first and Plath’s ‘Bell Jar’ recently served as my bag-book for the second time in as many decades. It’s an overdose of ennui, strings of sentences drenched in nuance, meaning and melancholy that no person should ever have been forced to contain. And then it hit me, they couldn’t, they didn’t, they all killed themselves… young.

The reading requires me to take constant tea breaks to absorb sentences like “We’re all lonely for something we don’t know we’re lonely for. How else to explain the curious feeling that goes around feeling like missing somebody we’ve never even met?” [i] and “I thought how unpleasant it is to be locked out; and I thought how it is worse, perhaps, to be locked in.” [ii] I need walking-around-the-room-breaks for when “The silence depressed me. It wasn’t the silence of silence. It was my own silence.” [iii] I even bought a pack of cigarettes because some sentences just deserve a cigarette. Sentences like “There’s good self-consciousness, and then there’s toxic, paralyzing, raped-by-psychic-Bedouins self-consciousness.” [iv]

Other sentences merit a glass of wine “Everything I’ve ever let go of has claw marks on it”. [v] There are some crafted specifically for chocolate “The trouble was, I had been inadequate all along, I simply hadn’t thought about it.” [vi] and “You have decided being scared is caused mostly by thinking.” [vii]

And then there are sentences for tears: “The parts of me that used to think I was different or smarter or whatever, almost made me die” [viii]; “And when at last you find someone to whom you feel you can pour out your soul, you stop in shock at the words you utter — they are so rusty, so ugly, so meaningless and feeble from being kept in the small cramped dark inside you so long” [ix] and “I meant to write about death, only life came breaking in as usual.” [x]

It occurs to me that I am invariably attracted to broken artists and conversely, broken art. My favourite writers include the likes of Leonard Cohen, whose cracks in everything exclusively cultivate art out of wreckage and its varying remnants. Then there is Borges whose mammoth intellect still cannot help but swim in the depths of his dark despair. Some of them survived their art, others didn’t but overwhelmingly I am attracted to artists whose art cripples their person. These are the books I come back to—‘Labyrinths’, ‘Portrait of an Artist as a Young Man’, ‘Notes from the Underground’, ‘Beautiful Losers’— broken books by broken people, followed by broken songs and broken paintings. All of them dangerously maladjusted beings that thrive in their broken-ness, while being broken. Almost as if the process that shatters their person simultaneously feeds their art. Rosamond Lehmann in her essay ‘For Virginia Woolf’ puts it perfectly when she sums the latter up by saying “Everything one can say about her at this moment seems too soon or too late; and to try to tell the truth about a person so unusual and of such integrity is so important one scarcely dares to make the attempt. One fears to plant lilies: she would have disliked that. Even to write poems about her – in a sense the most suitable kind of elegy for her – seems too much like wrapping her in a lullaby and singing her to rest.”

The ideology behind what makes a “true artist” is a contaminated one. It is inherently polluted by the emotions of consumers and audiences. Truth in art has little value in production and is given far too much value post-production. Or is it the other way around? Does the purpose of art trump the pedestals it is placed on later in its shelf life? Besides, even the term “art” is conceptually different for its creator and audience. This is where sub-textual swamps crop up. The term “genius” in art is almost synonymous with the term “tortured” but no one can quite classify the degrees of either. Is an overtly tortured artist like Kurt Cobain a genius, because he was tortured or was he tortured by that very genius? The same pathology can be applied to the legions who couldn’t separate themselves from their creations: Woolf, Wallace, Plath, Van Gogh, Elvis, Hendrix…et al. The list is long.

Google reveals 964,000 results for entries under “artists who committed suicide” and these listings are further annotated according to musicians, painters, writers and actors. There are lists that distinguish between suicide and death due to substance abuse, although, for many an artist the latter often constitutes life-by-substance abuse. This is not to say that all artists are over-sensitive, pedantic, cry babies who kill themselves because someone didn’t like their painting as in the case of French water colourist Le’on Bonvin, who hung himself from a tree in a Meudon forest after a dealer rejected his work. Also, it doesn’t do to assume that artistic genius is always synonymous with depression; there are plenty of statistics to lend weight to that troupe. In a sample of 4,564 eminent artists who died in the 19th and 20th centuries, an independent Garzanti’s Encyclopedia research team determined that 2,259 were primarily involved with linguistic pursuits, i.e. poets and writers; 834 were visual artists and 1,471 were musicians. There were 63 suicides and an initial logistic regression analysis of data found that artists have 270% higher risk of suicide than non-artists. Factoring in gender controls and other socio-demographic variables brought this figure down to a still-staggering 125%. There is plenty of science out there to support the relationship between suicide and creativity. Some scientists have suggested that the same changes in the Serotonergic system that are associated with depression in general and with impulsive suicides and homicides in the extreme, may also be responsible for risk-taking and sensitivity that characterizes creativity and innovation among most artists. In literary terms everyone from Bob Dylan’s “Behind every beautiful thing there’s been some kind of pain” [xi] to Dostoyevsky’s “The pleasure of despair. But then, it is in despair that we find the most acute pleasure, especially when we are aware of the hopelessness of the situation… everything is a mess in which it is impossible to tell what’s what, but that despite this impossibility and deception it still hurts you, and the less you can understand, the more it hurts” [xii], have expressed this sentiment.

“I admit I felt nothing when the news broke,/ it was only the stained glass bellies of the purple martins/ flaring, that made my skin bristle into the laketop stillness…”
Poem of the Week (1 July), by M.J. Arlett.