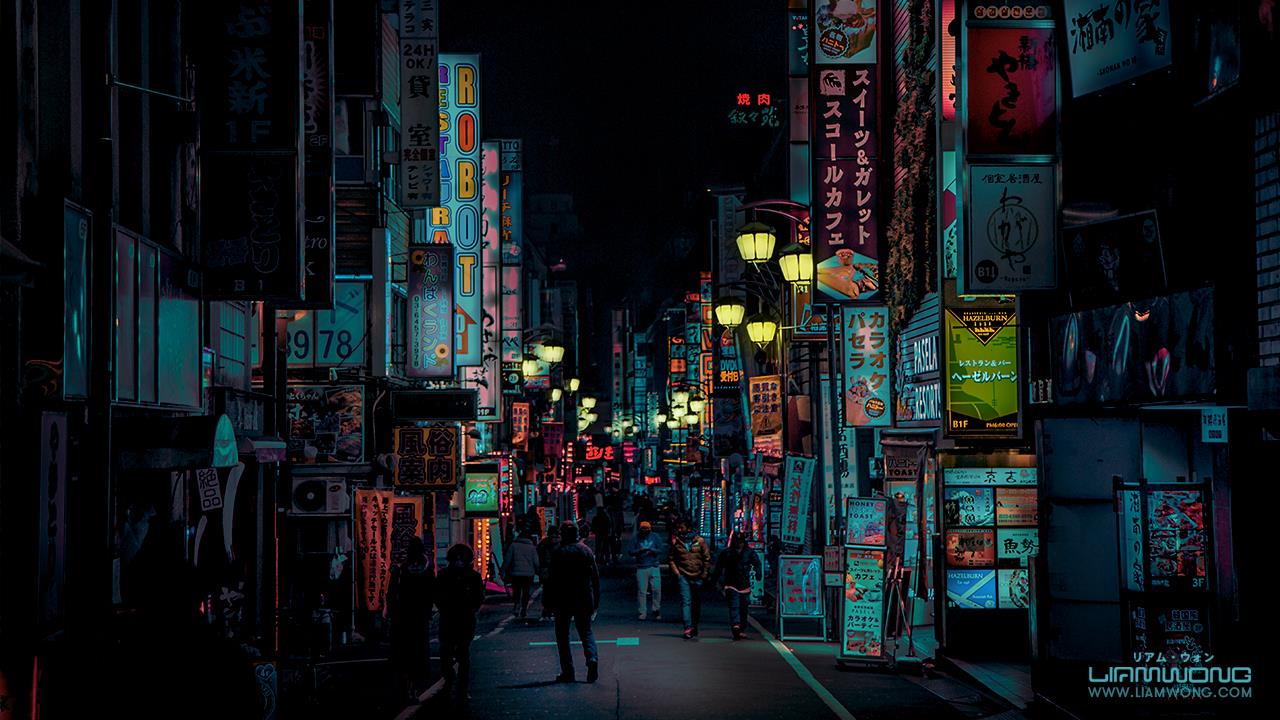 Kabukicho Nights by Liam Wong. Image courtesy of the artist.

Alice watched the clock drop, falling from her hands and landing on the bed where it bled cogs and parts in a pool of machinery. With a gasp, she fell to her knees and gathered up the bits and pieces in her arms. Delicate, timorous, the tiny silver slivers clinked together, muffled by the thick coverlet. A heavy canopy hung overhead, stiff and white with dust, rendering the light fixture above it useless. No light could pierce that pall.

She sobbed, her head bowed.

From her fingertips, glowing blue along the nail bed, emerged drill bits that whistled and whirred as they spun in motion. Deftly, she rearranged the components and stitched together a network of interstices with sparks and solder. The sharp tang of metal singed the air; underneath it, the subtle, comforting scent of oil like unguent. It was fiddly work, but her mechanical tendrils were quick and precise, moving too fast for the human eye to compete. All that could be seen was a cloud of blue energy and glittering wisps as, gradually, a viscera of wheels and barrels came together. A final click and a shift restored the clock’s heartbeat. She smiled, her fingers smoking, and gingerly returned the greasy organ to its smooth wooden case before setting it down gently. Spikes of pain spread up her arms in a stabbing rush, but quickly faded away as she unconsciously lowered her pressure sensors. She rested her head on her arms and stared at her work.

The steady tick tock punctuated the silent space of the room, tick, tock, tick, tock, clip, clop, clip, clop… She was mounted. The donkey’s roughshod hooves clattered on a cobblestone path. It was a straight road, lined with pillars and figures. The caryatids were great marmoreal erections with sisyphean eyes, their former glory and definitions dulled by the ages. Each figure was frozen in prayer and ensconced between their imploring palms was a little lamp to guide the traveller. Dismounting, Alice stepped upon a plinth to take a closer look. She stared at the statue’s perfectly symmetrical face and thought she saw something there. Shadows lapped at the eyelids, spilling across milky globes. A wink. A maenad glint. Alice did a double take and jumped back.

A trick of light.

“Alice! What did you do to your hands?!”

Alice snapped back to reality and jerked upright, confused. Around the very real, very loud, voice of Mitsuko, the clock’s ticking now seemed no more than a murmur.

“Damn it, Alice,” Mitsuko growled. “Come on. We’ll go get you repaired.”

Alice nodded and stood up dutifully. She was small, petite, designed for delicate work. Her hair, silvery fine like her tentacles, did little to disguise the patchwork of blue light printed across her scalp. The etchings framed her temples and cheekbones and disappeared down the nape of her neck, vivid against her dark skin. Beneath her hooded grey sweatshirt, the design wrapped itself around her torso and down her legs. She was entirely marked.

“God, you glowworm.” Mitsuko yanked Alice’s hood over her head and took her by the arm. “Come on.”

A few hours ago, the compound, cordoned off by a great wall, would have been alive with ads, brilliant holos that were projected against every possible surface, and a mixture of ragtag stands, bathing people in the gaudy shades of neon signs, but now all was quiet.

The flat was dark, but its drabness did nothing to hide its homely warmth. She could hear the steady crackle of white noise and news reports coming from Ophelia’s room, and, every so often, the slow whine of a sword being sharpened. Ahtawulf’s low mantra danced in every shadow, a deep frequency that made the air buzz. Hard blue shafts of light emanated from Jaxx’s doorway, fans blowing, cooling systems singing in a mess of pipes, tangled in wires. As she passed, Alice saw him supine on a leather bean bag, connected to the nexus through a big black headset. Hammer was in the open space where they convened for meetings; the holo was on and he was keeping count of his press ups with a new curse word at every crest. A briny cloud hovered over him and slowly diffused throughout the flat, carried by a small breeze that came in through a crack of a blacked out window behind him. Hammer acknowledged them with a nod as they passed. While Mitsuko paused to unlatch the locks on the front door, Alice stared blankly at the lumpy talk show host suspended on the textured living room wall. He was discussing the advantages of the latest version of Skin2Skin; organic cling film designed to reduce the appearance of ageing and other skin conditions.

As the last lock swung open, Alice felt a wave of guilt wash over her. She hadn’t been right since the Aria had infiltrated her mind six months ago. She kept getting things wrong, getting confused, breaking things. Sometimes it was hard to tell where reality stopped and started. Her head was like the clock, but no matter how much her fingers smoked, she could not fix it.

Mitsuko stopped and looked down at Alice—she barely reached her chin. “Look, don’t worry about it, ‘kay? We’ll get you sorted. No worries.”

Outside, the elevator was a gaping wound. Cables and twisted metal rattled around inside the shaft, constantly displaced by rats and roaches. Mitsu glared at it as they passed, but didn’t say anything. Alice knew she hated it; she said it was a liability even with the cameras Jaxx had installed. They picked their way down the graffiti-ed staircase, kicking aside loose litter and abandoned syringes. A bottle went tinkling down the steps and Mitsu swore under her breath, but it didn’t break. Glass should have been where the windows were, but instead screaming voids showed only polluted night skies. There were no stars and where the moon should have been, a projection, a holo, wavered against the clouds. Beneath it, London was a montage of bleached light and shadow, rolling out endlessly in a series of broken buildings and a blur of inchoate shanties to reach the Thames glittering sluggishly on the edge of the horizon. A few hours ago, the compound, cordoned off by a great wall, would have been alive with ads, brilliant holos that were projected against every possible surface, and a mixture of ragtag stands, bathing people in the gaudy shades of neon signs, but now all was quiet. Mrs Wu’s curfew saw to that. If Alice watched long enough, she would have seen enforcers roving around in packs, their electric batons coruscating against their grey hydrophobic uniforms.

They picked their way carefully down to the third floor through the labyrinth of refuse and dried up in-Soma packets, their silence disturbed only by the implacable scurrying of a smaller, busier world.

“Giz!” Mitsuko banged the door three times with a fist; patina flaked off in a small storm of red, spinning, eddying, on the air currents. Alice coughed.

There was a slither of metal on metal, small beeps, and the sound of a heavy weight being dragged back before they were admitted. The man on the other side smiled when he saw them and let them through. He was tall, pale, and missing half his face. In its place was exposed titanium, sculpted on the human skull and its musculature to an astonishing degree of exactitude. His grin had a disconcerting effect. The liquid crystal gel in his eye glittered as he beheld Alice, the tiny nerve endings suspended inside quivering as layers of gelatinous muscle pulled apart the contractile aperture of an optical lens. He cradled her hands and gently pulled her over to his operating table.

"The narrative is fragmented and nightmarish, existing in a state of almost-perpetual darkness, but perhaps necessarily so..." Jacob Silkstone reviews...