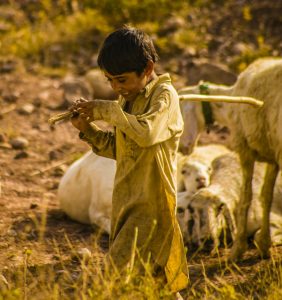 Untitled by Syed Hasan Pasha
Artwork courtesy of the artist.

The boguri is a pickled memory
and drumsticks have lent spring its briefness.
Docile hamlets grow lazy in the heat like cows;
and thin naked children learn to grow
with the taste of dust in their mouth.

Each time a car diminishes at the bend,
we cover our eyes unable to stand the silence
that leaves the country’s bones rattled along the forgotten road
where a thousand potholes stare at the sky
like empty sockets of a skull cured dry of dreams.

Blazing rubber trees smirk over
endless plantations of corrupt earth;
only a cuckoo can draw a few drops of blood
from this heart that had once tasted love.

Who will moisten these fields
with blood and sperm?

When a sal leaf falls from the helm of March
into night’s abyssal throat,
we know why nothing is moved into song
in these clanging depths where empty pails
of legends have fallen never to be retrieved
in old women’s voices.

The hours have ceased searching the horizon
for an anxious swirl of storm,
and we give in to the dead stupor
of a summer that grows endless in front of us
in rising haze and dust growing thicker
on memory’s leaves, until no one can believe
that winter and rain had lived here too,
in this dream of forests where
signposts trick with a different name.

Nabanita Kanungo is from Shillong. Her poems have appeared in Caravan, Planet (The Welsh Internationalist), Prairie Schooner, The Bombay Review, Café Dissensus and Coldnoon, among others. Her work has also been anthologised in Ten: The New Indian Poets (Nirala Publications, 2013), Gossamer (Kindle Magazine, 2015) and 40 under 40 (Poetrywala, 2016). ‘A Map of Ruins’, her first book of poems, was published by Sahitya Akademi in 2014.

In this week’s installment, resident TV critic Shazia analyzes representations of the “differently abled” and the actors who play them.

"On the evening news, we see cars floating." Story of the Week (August 25), by Urvashi Bahuguna.