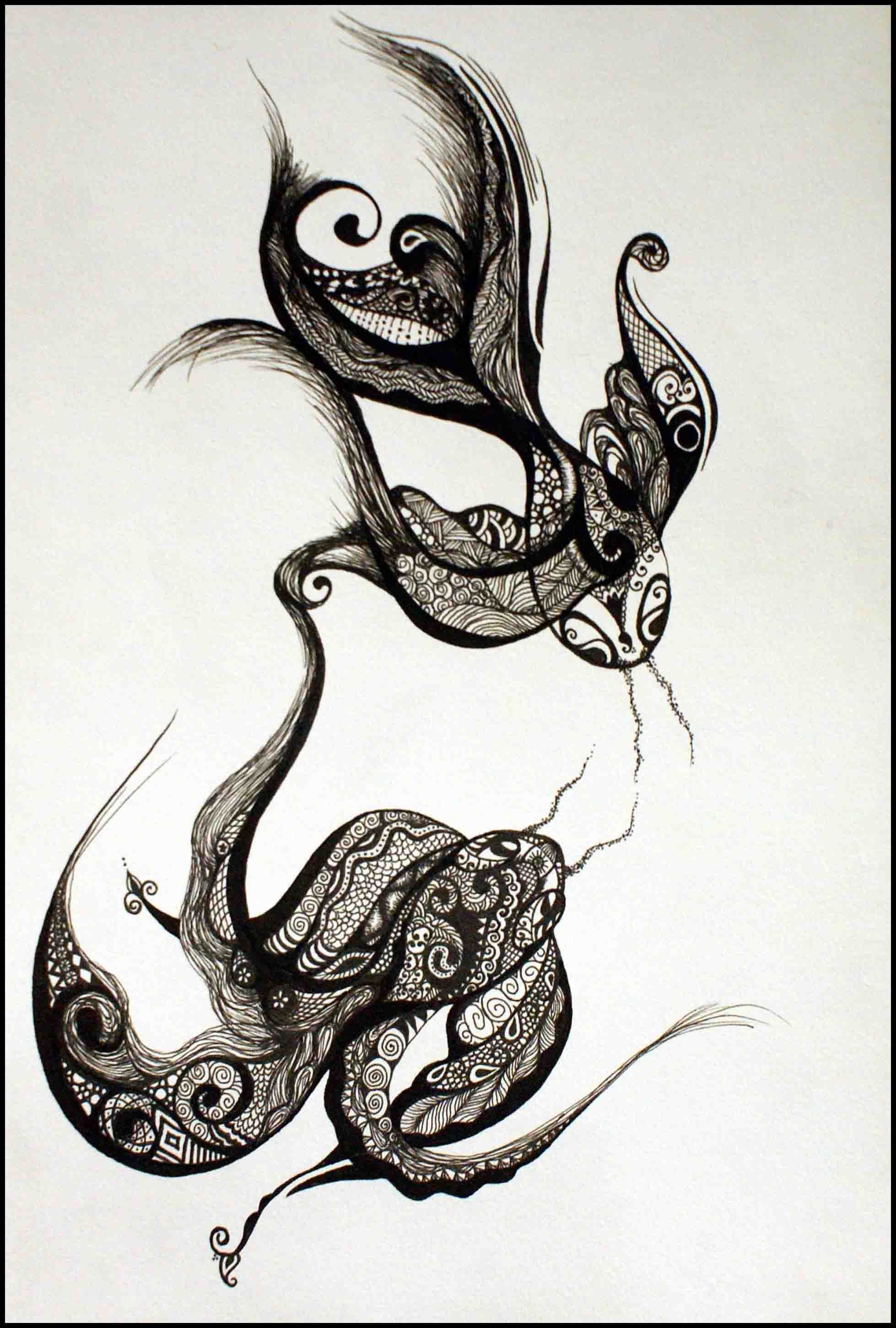 Examining the nature of sex, suspense and narrative in film

‘Sexual Aberrations of the Criminal Female’, reads the title of the text on Mark Rutland’s nightstand in Alfred Hitchcock’s Marnie, and thus may as well read the title of the film.  Though somewhat dramatic, and particularly outdated for a modern audience, this book title reflects the discourses of sociology, psychology, and of course sex in this Hitchcock masterpiece.  In what can be considered as several of Hitchcock’s stranger films, which move away from the simple whodunit structure to something more complex, the representation of sexual fantasy is incarnated in two femme fatales who defy the usual confines of the archetype.  Alfred Hitchcock was certainly known for his ‘Ice Queens,’ those unattainable beauties with pale skin, almost white blonde hair, and a manner which projected the warning: “tread lightly.”  These women, especially Judy in Vertigo, and the titular character in Marnie, also bring elements of social class and fetish into the mix: they are not simply objects of desire — they inspire entire landscapes of fantasy.

The 1964 film Marnie met with little commercial success, due in no small part to the central romance which Hitchcock describes as “degradation by love” and which French director Francois Truffaut calls “a fetishistic love”. A man is attracted to a woman because of her faults, not in spite of them; while such a sentiment could seem romantic at first, there is something very disturbing about how Marnie’s dark psychological past excites her suitor just as it makes her suffer. In the film, the man is the wealthy Philadelphia business executive, Mark Rutland (Sean Connery), while his secretary Marnie (Tippi Hedren), serves as the “Criminal Female”. He hires her, fully aware that she has stolen large amounts of money from her previous employers, but as a former zoologist, he decides to trap this criminal female, study her, cure her, and release her back into the wild. His interest is based on several external behaviors, none of which are standard indicators of attractiveness: she steals, she lies, she’s frigid. She rarely shows her interiority, which gives Rutland ample room to project his theories onto her.

There is a tense relationship between suspense, sex, and narrative — both in life and in cinema — based on the idea that nothing is as pleasurable as when we are made to work for it, be it a woman or the solution to a mystery.
Early in the film, Marnie comes to the office to work over-time on a stormy Saturday afternoon.  As she walks in, she notices the Colombian artifacts and picture of the “Jaguarina,” a fierce jungle cat that Rutland has domesticated. The office décor shows him to be a collector of rare and exotic artifacts. Even the piece she’s typing for him has nothing to do with his current business (it is never made clear what Rutland & Co produces or does), but is, in fact, an essay on predators in the wild: what he calls “the criminal class of the animal world.” The dialogue is meant to be referential to Marnie and her own criminal instinct, though it’s often so heavy-handed that it’s almost campy.  But then, lightning strikes outside of the tall bay windows behind Rutland’s desk, as the stringed instruments of Bernard Herrmann’s terrifying score begin an ominous dervish. Marnie is like a trapped bird (in continuation with the animal metaphors employed throughout the scene) as she runs for the door and then the couch, blinded by lightning which starts to flash blue and red in her mind.

As a spectator, between the frenzied music and the chaotic shots of Marnie darting around the room, you expect violence to ensue — were Psycho’s Norman Bates to storm in with his kitchen knife at this point, it would almost be a relief from the taut atmosphere which persists throughout the scene. Instead, after observing Marnie from afar with a calm but curious look on his face, Rutland goes to her and kisses her passionately on the lips. Her fear and symptoms of trauma seem to turn him on. It’s a strange kiss: surprising at best, violating at worst. “The love scenes were filmed like murder scenes, and the murder scenes like love scenes”, Francois Truffaut once said of Hitchcock’s films, and until seeing this scene, I had a difficult time understanding what that meant. There is something violent in this moment, in the contrast between the cinematic aesthetic of romance and suspense,and that of the woman herself, who wears a white sweater buttoned up to her chin and an unshakably distant expression.

More ghost story than murder scene, however, the first encounter of Scottie (James Stewart) and Madeleine/Judy (Kim Novak) in Vertigo lays the foundation of a romance that, like Rutland and Marnie’s, is based on the love for a type of woman rather than the woman herself. The walls of the restaurant are a plush, bright red, but the characters wear muted shades of grey or blue.  Judy disguised as Madeleine, on the other hand, is wrapped in a long, black dress with a green shawl around her shoulders. As the camera slowly scans the room, following Scottie’s eye, the music swells with romantic violins and rests on Madeleine’s back, who is facing away.  One’s attention is immediately drawn to her light hair in its trademark vertigo-inducing spiral, and the lack of a shot with her face immediately creates an aura of mystery. The eye is always drawn to the face when a human figure is present, and if an image of a person shows only a beautiful back and hair, we long to see her even more.

This sense of fantasy and unreality is heightened when Scottie gets his first glimpse as the couple gets up to leave. Instead of letting the viewer down by revealing her face in a frank way, Hitchcock continues with his game of delayed gratification. As she begins to walk to the door, the shot pauses when she’s in profile, and the camera flickers between her face and Scottie’s more haggard, nervous looking image, bringing her mystique up to the level of a goddess. The background goes out of focus, and she looks no longer like just a woman, but a painting or even a ghost. This amalgam of beauty and strangeness is heightened through two well-placed mirrors – one above the bar and one next to the door. Without the mirror above the bar, Scottie would not be able to see Madeleine in any subtle way, but as the couple exits, Scottie sees her reflection once more in the mirror next to the door. These two mirror effects suggest the contrast between what a mirror is supposed to do (reflect reality) and what Madeleine’s reflection does to Scottie (spark an obsession which will have little basis in any reality).

Though the sociological element of sexual fantasy is less apparent in Vertigo than in Marnie, it is Scottie’s view of Madeleine as so unattainable that fuels his desire for her. Where Rutland enjoys being the society man who slums with his criminal girlfriend, Scottie longs to be the lowly detective who makes it with a great lady. At the base of both of these fetishes, however, is a similar striving for some form of impossibility. There is a tense relationship between suspense, sex, and narrative — both in life and in cinema — based on this idea that nothing is as pleasurable as when we are made to work for it, be it a woman or the solution to a mystery.  Hitchcock, however, pushes this idea of delayed gratification to the extreme where the woman is impossible to “get”, and there sometimes is no solution to a mystery invoked throughout the story. The excitement is in the chase (or hunt, for Rutland the zoologist), and the aesthetics of these sexual fantasies are often more beautiful and complex than any situation in which the fantasy could be successfully achieved.

Jess McHugh is a Contributing Editor for the magazine.