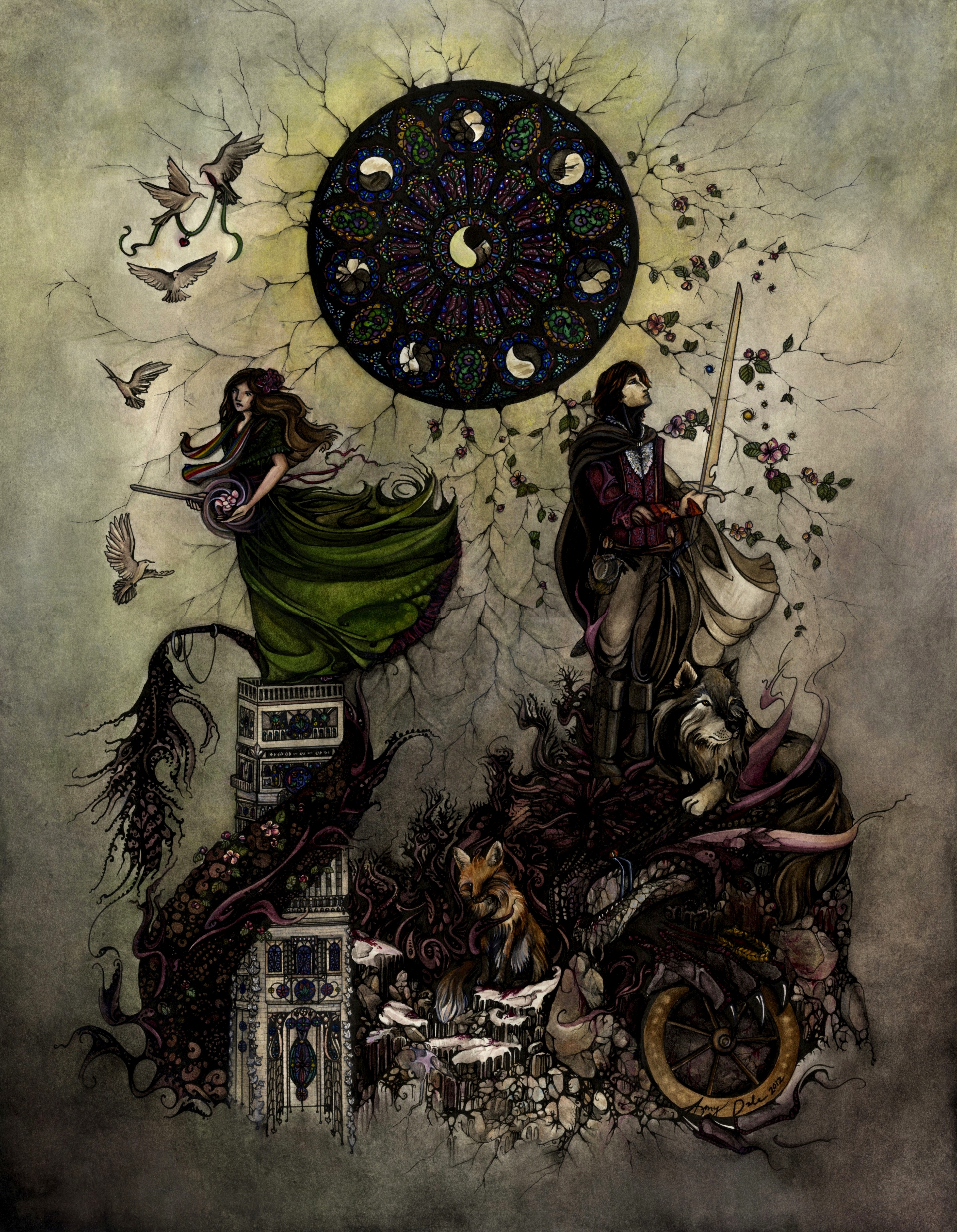 Watcher of the Seals by Amy Dale

When I was about eleven years old, I discovered Harry Potter. A cousin brought it for me from Riyadh, telling me it was a very famous book, though I had never heard of it before. I was in love immediately, having not yet discovered literary fantasy writers like Tolkien, and still being young and naïve. But it was the Harry Potter series, and by proxy the pursuant fandom, that changed my life by introducing me to fanfiction.

Fanfiction characters tend to be weak, helpless, and unable to fight for themselves, and the need for indulging the writer’s savior complex through characters that mirror their own personality, often results in a classic portrayal of rape culture.
I still look back with fondness at my memories of early fandom and fanfiction; I read Eliza Diawna Snape on her original website; I read Cassandra Clare’s early work and thought it was actually good, but I also fell into the dark side of fandom: the one with the inevitable erotica and twisted storylines. And then I started writing my own fanfiction, and that’s all I remember until the point I reached college, which caused me to slowly stop writing it altogether. I was obsessed with fanfiction; school bored me, my classes bored me, my teachers were dull and wanted me to rote-learn instead of motivating me. I never realized how much I loved to learn, because I never had the chance to experience the enthusiasm of learning until I was in college. Fanfiction – or, as it’s more commonly referred to as “fanfic” – was my friend. I wrote it in class when the teacher was explaining math problems on the board, or making history so dull I wanted to sleep. I wrote it instead of doing my homework or studying for exams or getting enough sleep. I wrote it surrounded by family, taking no part in the conversation or even noticing anyone talking to me, in restaurants while eating absent-mindedly. I wrote on sheets of paper torn out of school notebooks, in notebooks, journals, on scrap pieces of paper.

Fanfiction characters normally tend to be weak, helpless, and unable to fight for themselves, and the need for indulging the writer’s savior complex through the characters that mirror their own personality, often results in a classic portrayal of rape culture. One of my major fanfics had an original character referring to Draco of Harry Potter as “Dragon” (12-year-old me thought it was very clever), and every time someone annoyed me, I’d threaten to “sic Dragon on them” if they didn’t stop bothering me. One day, my sister sat me down to talk about who this Dragon was, thinking it was some online boy I had fallen in love with, only to realize it was a make-believe character. I was the one who had forgotten he didn’t exist. I read a teenage help section in a magazine, about problems with self-harm, and I obsessively pondered for a week about why the young teens who indulged in cutting and other methods of self-harm, didn’t just magic the scars away like Harry Potter did in most fanfiction; it took me a week to realize that magic wasn’t real, and in real life, you lived with the consequences of your own depression, self-loathing and generally poor mental health. In recess or free periods, I wouldn’t talk to friends or do homework, I’d put my head on my desk, block out external stimuli completely, and “take a dip into fantasy-land” as I called it – i.e. writing fanfiction in my head. My fiction-writing process is something I call ‘moving pictures in the brain’ because I can see actual people acting out my story, as if I were watching a movie. I often couldn’t sleep at night because my brain was feverishly playing out the moving pictures, and when I finally did sleep, it was to dream up new sequences and plots.

Then one day, I looked up, and over a year of my life had passed by, and I remembered nothing but what I had written. (And, in retrospect, all of it was crap.) My penchant for melodrama aside, it was easy to rebuild my friendships, and not-so-easy but still possible to graduate high school with decent enough grades to get into a good college. I did pick it up again later, but I still never realized what I was seeing in fandom, nor understood the sub-culture on whose fringes I lurked, until I was older.

It may have been Trekkies who invented fanfiction, but when it comes to the Internet, it’s a field dominated by women. Due to the trend of bringing books to life on screen, fandoms rise and fall with movie series. Case in point: Harry Potter, Lord of the Rings, Twilight (the bane of all actual vampires), and now Fifty Shades of Gray (Sign here, here, and here before we can tie you up). But when it comes to television, the most popular fandom for fanfiction will always be the one with the most attractive men in it. These fandoms include television shows from the CW Television Network, which is geared towards the 18-34 demographic. Even television shows like Supernatural, initially intended for male audiences, wound up catering to a largely female audience. The result is that fanfiction, which is essentially wish fulfilment, winds up being a conglomeration of sexual fantasies so far-fetched and unrealistic, they could have only been written by young girls or virgins. One can argue that there’s nothing bad about that, and it would be a sound argument as well. But the problem occurs when certain disturbing elements start to pop up in fanfiction, trends so warped and disturbing that you’re inclined to wonder about the writer’s mental health, and fervently hope they get help.

The most common and disturbing trend is incest. Some people defend incest that does not result in children, and takes place amongst consenting adults. I’m not one of them, and I’m incredibly disturbed by Flowers in the Attic, but my problem with incest in fanfiction is that it mostly applies to rape fanfiction and child sexual abuse. A common case of modern-day incest is from the Supernatural fandom. The term “Wincest” was coined for incest between the two lead characters, the Winchester brothers, and occasionally their father. Considering that the show depicts two sons with a dead mother and a negligent, almost abusive father, if creating incest out of this storyline isn’t horrific enough; creating incest between a father and his teenage son is worse. In Harry Potterfanfiction, Voldemort/Harry pairings with Harry Potter becoming Voldemort’s sex slave will have one of two outcomes: either Potter is subjected to rape and sexual assault and kills himself if he isn’t rescued, or he develops a severe case of Stockholm Syndrome, and Voldemort may not need to fall in love with him for that to happen. The plot is poor, yes, but look beyond that, to the disturbing portrayal of sex.