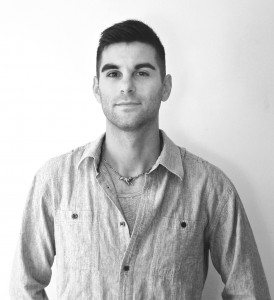 Hilda Hilst was one of the leading Brazilian writers of the 20th-century, a winner of  ‘Brazil’s most prestigious literary prizes’: her fame was accompanied by notoriety, with critics registering their disapproval of ‘the filthiness of her final books’ (Hilst’s ‘pornographic tetralogy’, written between 1990 and 1992). Her reputation among English-language readers is beginning to grow, thanks to a series of recent translations. Foremost among those translations are Nathanaël’s version of ‘The Obscene Madam D’ , and Adam Morris’ translation of ‘With My Dog-Eyes’, which received the Susan Sontag Prize for Literary Translation.

In this exchange of e-mails with The Missing Slate’s Literature Editor, Jacob Silkstone, Adam discusses the origins of his interest in Hilda Hilst’s life and writing, the importance of translation, and the dangers of seeing the internet solely as a liberating and democratic force for good.

And but so, what drew you to Hilda Hilst? When and where did you first read her work, and did you begin with the poems or the prose? What problems does she pose for a translator?

I first heard about Hilst from a visiting professor at my university, João Adolfo Hansen, a scholar of 17th-century rhetoric. He studied the poetic sermons of Jesuit missionaries in Brazil, Antonio Vieira and José de Anchieta among them. He was one of the wisest people I’ve ever met. Amazingly humble, and still curious, though it was clear he’d read nearly everything. Our class was small and Hansen is the kind of teacher who understands the value of letting the conversation wander. We’d end up in the driveway on a smoke break talking about Foucault or climate change. But I was studying Brazilian literature at the time, so we talked a fair amount about that. Hansen knew all the 20th-century authors just as well as the colonial ones. He recommended Hilst, but I didn’t read her until I got to Brazil. I was in Rio doing a summer language program with a bunch of college students who were nearly ten years my junior. I started skipping all the classes to go to the Jardim Botânico or Parque Lage to read instead. One day I met up with Hansen for coffee at a bookstore and he made recommendations as we wandered around the stacks. Hilst came up again, and Hansen told me about the time he met her—by then an elderly alcoholic woman. I bought a copy of ‘A obscena senhora D’, and still remember sitting on a chalk-white stone bench in the botanical gardens when I first began reading it. She completely bowled me over.

It was clear to me why Hansen admired her so much: Hilst appropriates poetic conventions, not just from Vieira and Anchieta, but from Dante, Camões, and all manner of obscure Iberian mystical poets. I love her poems, but consider myself a prose stylist. I’m slightly intimidated by the idea of translating poetry, although ‘With My Dog-Eyes’, the Hilst title I translated, does contain poetic segments. Those were some of the most challenging parts of the book to translate. But they also helped me understand the poetics of her prose, in particular the ambiguity of voice that Hilst always seems to be courting. ‘Dog-Eyes’, for instance, shifts between first and third person, and even between third person speech and indirect discourse.

The lack of readership embittered Hilst in the end, but she claimed always to know she was a genius.
Where do you think Hilda Hilst fits into 20th-century Brazilian literature? To me, she’s very closely associated with Clarice Lispector, but that could be an overly simplistic impression…

Everyone seems to think there’s a strong link between Hilst and Lispector, but I don’t see it. Hilst is quite singular, but if pressed to make a comparison, I’d say she’s actually closer to Guimarães Rosa. Hilst and Lispector admired each other’s work, and I believe they may have met once. But they weren’t friends, and I don’t think their styles are really that similar. They were writing at the same time, so it’s hard to describe one as an influence on the other. This is obvious in their work. Hilst’s unapologetic erudition borders on hermeticism, which was deliberate. She privately took pride in her patrician origins and was in many ways an intellectual snob: her inheritance allowed her to write for an audience that was practically non-existent in her time. The lack of readership embittered her in the end, but she claimed always to know she was a genius. Lispector on the other hand was the daughter of immigrants, and was practically a self-made woman: she wrote romances and ladies’ advice columns under pseudonyms to support herself. I’m not saying she was compromising with what Hilst denigrated as “bourgeois” literary taste, but there was more of an urgency for Lispector to seek out her readers. You feel it when you read her—this search for a soul who would understand her. It’s actually her discovery of the universality of this need to search, and her direct confrontation with it, that makes Lispector’s prose so arresting. Her novels could also be called mystical in timbre, but her language is less high-flown, less allusive. She uses ordinary speech, but in weird ways, a diction that many described as that of a foreigner, but which is really just her genius for seeing the wonder and strangeness of mundane things, and finding ways to express these ways of seeing and perceiving in prose.

I’m interested in Hilst’s ‘unapologetic erudition’. Thomas Mann says somewhere that ‘A writer is someone for whom writing is more difficult than it is for other people’, and I see a dense, hermetic prose style as a valid way of expressing that difficulty.

And I notice that, in ‘With My Dog-Eyes’, Amós Kéres quotes Bertrand Russell as saying that ‘obviousness is always the enemy of correctness.’ Is the ‘unapologetic erudition’  in Hilst’s writing a result of her desire to strive for the ‘correct’ thing, rather than settling for the ‘obvious’ thing?

I haven’t actually read much Mann—my personal literary history is all over the map. Lots of obscure things, but lots of holes as well. I agree with Mann, though: writers demand so much more from language than anyone else. And language is something we’re always learning, something that’s really never mastered and even begins to slip away in old age. I think a dense style is one way for those who have long apprenticed in language to push themselves further, with the belief that language might unveil truth if it’s worked over long enough. I don’t practice this in my writing, but some of my favorite authors do. Hilst is one of them. Others are much more limpid, and submit language to a different sort of compression.

The quote by Russell that you mention comes from a book Hilst was reading at the time she wrote ‘With My Dog-Eyes’, a collection of essays called ‘Mysticism and Logic’. Hilst was fascinated by irrational truths of the human condition. Life is inexplicable suffering without love, but love is irrational. Hilst was always probing the misery and beauty of the human condition, and I think it was this mysterious and essential contradiction that drove her to poetry. Words, for Hilst, were a sort of groping in the darkness, which is a phrase used by Madame D that could also apply to Amós’s metaphor of subterranean deposits and veins of meaning. This is, I think, the most important trait she shared with Lispector: the gnostic search for a sudden discovery of knowledge, a flash of enlightenment, fleeting contact with the divine, with greater meaning—however you want to put it. It’s the experience that Amós has in ‘With My Dog-Eyes’. I’ve observed elsewhere that Lispector’s ‘The Passion According to G.H.’  is titled as though it were one of the gnostic gospels, and have I’ve also been struck by the similarity of her language to some of the language found in those texts, particularly this fascinating and bizarre scroll called Thunder, Perfect Mind. I’ve no idea if Lispector read the gnostic gospels, but they were discovered in Egypt in the 1950s, and Lispector’s Passion, published in 1964, contains a number of references to Egypt. One of the gnostic codices discovered in the 50s was purchased by Jung, who was obsessed with the gnostics. Hilst, in turn, was obsessed with Jung and almost certainly studied the gnostics. These gnostic themes recur in her poems too.

While we’re on the subject of ‘The Passion According to GH’, I’m half-remembering a passage from Idra Novey’s afterword to her translation of the novel, and (luckily for me) it turns out to be available via Google:

“A friend in Brazil told me of a young woman in Rio who’d read Clarice Lispector obsessively and was convinced—as I and legions of other Clarice devotees have been—that she and Clarice Lispector would have a life-changing connection if they met in person. She managed to get in touch with the writer, who kindly agreed to meet her. When the young woman arrived, Clarice sat and stared at her and said nothing until the woman finally fled the apartment.”

Are all meetings with literary idols better avoided?

I usually prefer not to hear my favorite writers read their own work, and somewhat dread meeting them. I was very disappointed by an eminent American poet I had lionized in college both times I saw her read. On both occasions she was so laconic and indifferent to her audience. Another of my two favorite living American prose writers also gave a terrible reading when I saw her a few years ago. It was so crushing to me that I refused to accompany a friend of mine when one of my favorite writers, known for being somewhat reclusive, gave a small reading in New York a while back. My friend told me I’d have been disappointed. So I’ve developed a bit of a paranoia about it, I think.