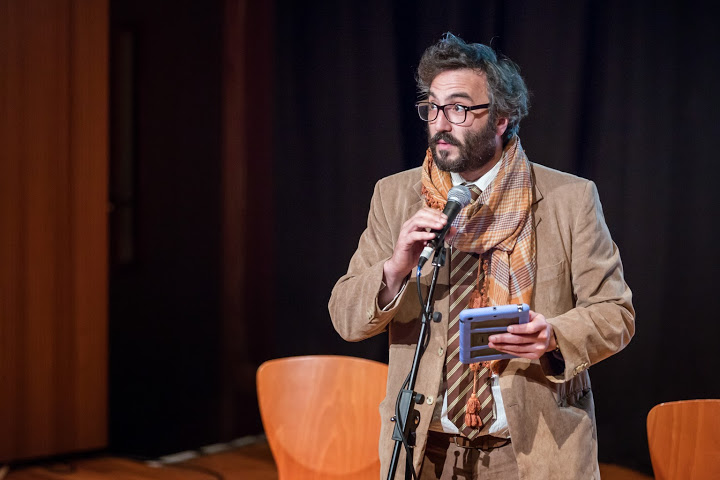 Ryan Van Winkle’s second collection, ‘The Good Dark’, has been described as “Channelling Bob Dylan at his trippy, visionary best.” No other collection of poems this year (or any year) gives the reader “exploding lightbulbs, giant waves, apocalyptic floods, fat flies in mason jars, a woman pushing her eyes into the back of her skull and a boy sending his finger into the sky on the back of a Roman candle”, and we’re delighted to welcome Ryan to Islamabad (or Bergen, or one of the innumerable places where The Missing Slate has a temporary home) for the penultimate stop of his globe-spanning Virtual Book Tour.

Which of the poems in ‘The Good Dark’ did you begin writing first, and which did you finish editing last? And which went through the most redrafts?

Cool question, but one that’s hard to answer because I don’t keep very good track of these things. I think ‘A Raincoat a Spell of Rain Ago’ was written a while back, maybe 2007. It set the trajectory for ‘The Good Dark’ because I couldn’t fit it into my first collection and very much wanted to write a collection where it could sit at home. I also wrote ‘Untitled (Snoopy)’ and ‘Snow Passing in the Night’ quite a while back. Both of those were going through changes right till the end of putting this collection together. ‘Snow Passing in the Night’ used to be called ‘The World is the World’ — I’m glad we changed that.

As for edits, I tinker at various times and occasionally make hard re-drafts. ‘Quarry’ had seven different versions, mostly me trying to get the ending right over a number of drafts. ‘One Year the Door Will Open’ had five drafts, ‘Gerontocracy’ had four.

As I’m looking through my files I just realised I’ve edited dud poems a similar amount of times. These are pieces which were never good enough to get into the collection and I did four drafts of them. You’ll likely never see poems like ‘Cardiology’ or ‘Lucripetous’. I guess it takes a while for me to decide something isn’t working and I find it hard to tell when I’m wasting my time.

You’ve been described as “a pioneer of spellbinding one-on-one poetry readings…” How important is the performance element of your work? Is ‘page vs. stage’ a false dichotomy?

I’ve long been dissatisfied with the stage in terms of it being an ideal reading environment. You can get some good audiences, some great mcs and bills, but I’m never quite sure what a bunch of people in a library or a bar are getting out of what I’m reading to them. And, because of that, I’m not quite sure how important performing to an audience is to my work. However, the couple of one-to-one pieces which I’ve done as collaborations (with musicians Dan Gorman and Gareth Warner) do have an important effect on the work.

I can’t write for the stage. That’s not where my head is when I’m writing a poem.
Through intimate readings like ViewMaster and Red, Like Our Room Used to Feel I found an audience I wanted to talk to and I found a way to let the poems speak for themselves. I could see what they were doing and get feedback through reviews and personal interaction. I’d gotten workshop-type feedback before, but this wasn’t about words or lines or anything specific like that — it was about the feeling people had when they left. When I saw enough comments or reviews saying how the work was affecting actual people, that was profound to me. Charlotte Runcie did it well in her review when she wrote that the Red Room performance

“… makes you feel not as if you’re listening to someone read some poems, but as if poetry is happening to you, right now. In this space, poetry really feels, as it should, personal and universal at the same time – the language of being alive.”

Reading things like that had a huge impact. I was very insecure about this set of poems’ lack of precise drama, for their attempt at the truth of something inarticulate. They resisted a simple, “This one is about visiting a chicken farm.” They weren’t neat in that way. There was a style of poem which I’d fallen in love with, which I was aiming for in this collection. I’m talking about poems like Sarah Broom’s ‘Snow’, Michael Burkard’s ‘Tooth’, Matthew Dickman’s ‘Slow Dance’, Bob Hicok’s ‘Bottom of the Ocean’, Mary Ruefle’s ‘Goodnight Irene’ and others. These all had a quality that I wanted in my own work, they were honest and open and raw but they refused to explain, they let me, as a reader, inhabit them. They comforted me, honestly.

So, I wanted to know if the poems I was writing were working in people the same way the poems I related to were working in me. The Red Room audience and reviewers gave me confidence in a way that readings in pubs or at bookshops or festivals never did. On a stage, I’m always performing, trying to almost bury the poems. It’s a nervous tic which through the one-to-one shows I’m getting better at managing.

What I’m getting at, as well, is that I don’t think there is — for me — a false dichotomy between page and stage. For my work, the dichotomy is very necessary, very real. I’m sure it is different for other poets but, for me, I can’t write for the stage. That’s not where my head is when I’m writing a poem. Often, I’m writing to myself or to a loved one, I’m writing to a small worry, a tiny sense of an idea. If I wrote specifically for the stage, with an actual audience in mind, I would totally blow things up and in doing so would drift to the polemical, the comedic, the prosaic and didactic.

On an actual stage I prefer to be with a musician or musicians who are better than me, otherwise I end up making stupid jokes and trying to entertain. When I write a poem, I’m not trying to entertain, I’m trying to be honest. My compulsion to entertain at a ‘stage’ reading would lead me to write entertainment — not honest poems, not art.

Is there a connecting thread running between the seven ‘Untitled’ poems in ‘The Good Dark’? Any reason you’ve ‘falsely’ attributed the final epigraph (“It was a dark and stormy night”) to Snoopy, rather than Bulwer-Lytton? (I’ve thought for a long time that “It was a dark and stormy night” isn’t that bad as an opening sentence, so perhaps its appearance here is the start of a long-overdue redemption…)

I’m glad you asked that question because I’ve often wondered about that myself and I wanted people to wonder about them too. The simple absence of titles for all of them was important to me because they all, I think, deal with feelings of absence and loss, and move the collection forward in their own way. I think that binds them together but I’m reluctant to say more than that and cut off meaning and resonances for other readers.

As for the false attribution — I did consider citing Bulwer-Lytton for a time and I just couldn’t do it. I wanted the image of Snoopy, and the comics pages, and the smell of newsprint, and nostalgia there from the very beginning of that poem and I couldn’t do that any other way. And, of course, citing Snoopy (rather than Schulz even) makes light of the portentous which — in some way — the book is trying to do.

That said, I can remember learning that line was considered the worst in literature only a few years ago, probably around the time when I wrote the poem. I probably was surprised because I didn’t think it was that bad a line, though I can totally understand why people agree that it is. That poem, I suppose, started with me just trying to make the line work, to see if there was a context where it could work and it opened up this huge can of worms which is the final poem.

“If you’re from the dominant culture, your culture, your language, the things that form your identity, are in many ways so dominant that they are invisible…” The Missing Slate’s Author of the Month, Erika T. Wurth, in conversation with Abbigail N. Rosewood.

"...Someone somewhere/ whispers: 'let's partition the cat.' Grandfather/ canes in his history lesson: 'the other side/ was a land of...