Mum remained youthful and good-looking for many years, and Dad would keep noting that now and then. She remained youthful even  at fifty, and I remember her jubilee well. It was held in the village where she lived, gathered round my younger brother and sister, and they brought their kids if any, I suppose. However, it occurs to me now that the only kid then could be my son, then three years old. Many guests came together, the house full of them, all Mum’s kindred.

Only my Dad was missing: it turned out that he lived alone at the moment, and I’m not sure that he bore the date in mind. After a domestic quarrel Dad preferred to live alone for a while, and had gone off and settled by himself. And Mum stayed at my Granny’s house.

Relatives from my Mum’s side were unknown for me, my brother mingled with them better, and they liked him more. The only kinsman I remember well was Uncle Nick, Mum’s cousin; I went out to the inner porch to keep his company to smoke. A nice guy he was, curly-headed, but I liked him not for that: he stood up for me when a local bigwig, already drunk, asked me to fetch an ashtray. What, an ashtray in a country house where nobody ever smoked!

Sure Dad smoked, but he was not present at the jubilee, and he’d have badly hurt the bigwig’s head with an ashtray if we’d had one. He considered it disgraceful to dance attendance, and he never asked anyone to attend to him. It was only the last year he was alive, that he was pleased when I came and offered to shave him. 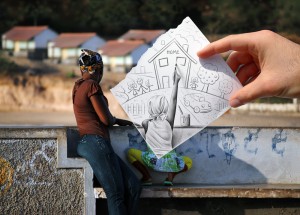 Pencil vs Camera by Ben Heine

Soon after I had made the acquaintance of Uncle Nick, he passed away because of an accident. I met his daughter once, in the train from Moscow, quite by chance. I traveled in the compartment with a pretty girl, not curly-headed at all. I asked where she was from, and she appeared to be from Granny’s village. It turned out that we were relatives, though not so close. She was nice-looking, like Mum when young.

On Mum’s jubilee my three years old son didn’t quite realize the event. It happened on a frosty day, and he was set on a Russian wood stove-top to warm himself. He sat there watching the event, then got down and broke into a dance like a muzhik: with a patter of his feet, and clapping in time with the music, and danced squatting at last.

On Mum’s seventieth’s anniversary we arranged her celebration at a restaurant in the town where she had worked half of her life. Many teachers, her colleagues, were invited around, and there came all of them but my homeroom teacher. Even Mum’s classmate arrived from afar, Yekaterinburg; they shared the same desk till the third grade. Their whole life, they wrote letters to each other. On holidays Mum always got a postcard with the same beginning, “Dear Tatiana.”

Her every letter started this way. A postcard gave advance notice to the forthcoming holiday: New Year’s Day, or March 8, or May 1… Mum’s mail was always kept in the writing table’s drawer with the major papers. For a long time, I took no notice of the old postcards. Then one day no more letters were being received, and there was no response to Mum’s mailing, and I got to know how much they meant for Mum. Happily enough their communication was restored in a while.

Although she arrived to Mum’s 70-th anniversary in time, she refused to say welcoming address at table. I think she had nothing to add after so many years of correspondence, when so much had been spoken of good-for-nothing husbands and ill-starred children. More than that, they much worried about their daughters-in-law and grandchildren that had appeared already.

Dad was missing again; he felt unwell and kept to his bed.

As a matter of fact, we danced a lot on that day. I was particularly amazed by my son, grown up already. He dashingly boogied in a center of the general circle until my playfellow joined him there, a king of dancing at the disco clubs in my youth. They started a dancing contest: hold on!

And I was confused whom to support then, my childhood friend or my son: I only was whistling madly with my two fingers in the mouth.

Nice it was that my homeroom teacher wasn’t there to see me whistling then.

Valery Petrovskiy is a Chuvash State University, Cheboksary graduate in English, graduated VKSch Higher School, Moscow in Journalism. His prose was published in the US in The Legendary, Danse Macabre, among others; in Blinking Cursor in the UK, RYGA Journal in Canada, and Going Down Swinging in Australia. Valery lives in a remote Russian village by the Volga River.