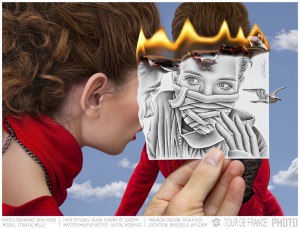 Pencil vs Camera 67 by Ben Heine

In Nepal, social differentiation between men and women has always been an issue, one exacerbated by orthodox Hindu values and practices.

Traditional beliefs like “the birth of a son paves the way to heaven” and “let it be late, but let it be a son” directly reflect the perception of society towards women given that a large majority still value such beliefs. The traditional kanya daan system—a form of Hindu marriage where a virgin daughter is given away as a gift, with blessings doubled if the daughter has not yet entered puberty—is still performed today. They are married away as young as 15 without their consent. Early marriage has remained as a tremendous problem in Nepalese society even though the minimum legal marriageable age for a girl is 18 years. Menstruation and childbirth on the other hand, two completely natural processes, are considered impure and women’s subordination is largely a byproduct of these and other biological and cultural phenomena.

In a patriarchal and male-dominated society like Nepal, where women are systematically discriminated, the identity of a woman in the main is always linked with her husband. Although the practice of suttee (burning the deceased and his living widow together in a large pyre) was eventually abolished long ago, women still lose their status within the home and society and continue to suffer the physical, mental and other social discriminations and malaises upon the death of their husbands and in some instances are held responsible for the death of their husbands.

That the same values are reflected in the country’s laws is hardly surprising. The use of “widow” derived from Sanskrit, meaning “empty” has been amended after Women for Human Rights (WHR) passed a national declaration to use the word “single women” in 2002. However, the harsh connotation of this derogative word remains in the (mis)treatment of widows in Nepalese society.

Though there is still no security for single women, positive developments in the Eleventh Amendment of the Civil Code has provided more security than before. Remarriage has now been legalized for single women though the pension of the deceased husband is lost if she remarries. Single women are also given allowances. Previously, only 60-year-old widows used to get Nepalese Rupees150 as a monthly allowance, ironic because the average life expectancy of Nepalese women was only 60. A single woman also has full rights over her deceased husband’s property; where earlier laws stated that the woman be either 36 years of age or married for 16 years to be entitled to her husband’s property. But even now, if she remarries the property should be handed over to the deceased’s heir.

Single women also follow a strict dress code though recently, women’s rights activists have started campaigning for widows to be allowed to wear red garments as opposed to the standard white uniform. Even so, single women hesitate to do so out of a deep fear of societal retribution, which only shows that despite legal reforms, societal taboos still remain.

That said the past few amendments in the Civil Code can be witnessed as a significant improvement in rendering rights to women and making gender neutral laws. Previously the laws were exceptionally discriminatory and did not allow female witnesses in legal proceedings or recognize them as independent citizens. However in the 2007 Constitution, women have been recognized as independent citizens and can transfer citizenship to their children. Until the Eleventh Amendment of the Civil Code daughters were not considered as coparceners to ancestral property. Nevertheless, property laws are still discriminatory with regards to the marital status of women. Only unmarried daughters who, before the Eleventh Amendment necessarily had to be 35 years of age, are placed as the coparceners along with sons. A married daughter cannot claim for a share of the property; furthermore, a woman’s exclusive property is inherited in the following order: son or (unmarried) daughter, husband, and then finally to the married daughter.

Though there has traditionally been a lack of female representation, Nepal has started an affirmative legislation along with its effective implementation according to which a certain quota is reserved for women in almost every sector. Perhaps the absence of female participation in policymaking and politics is the greatest impediment to increased progress in the area and the consistent formulation of patriarchal and consequently, misogynist laws.

Although the Constitution of Nepal declares education to be a basic fundamental right, most parents especially those in rural areas do not bother to invest in the education of their daughters, as they are meant to be “gifted” away, nor do they have a say in family-related decisions. Even a woman’s right to vote is subjected to the consent of male household members. Here, yet again, traditional beliefs like “a woman-ruled house is sure to be destroyed” play a role in limiting the contribution of women in society. Due to lack of awareness, economic dependency on fathers and husbands, fear of destitution and homelessness if unwed, young girls are not willing to fight for their basic rights.

Inadequate, weak laws and the non-enforcement of existing laws make women more vulnerable to violence and discrimination. An outspoken woman in Nepalese society is generally accused of witchcraft and mistreated in order to be silenced. In June 2008, Laxmi Bohara was severely beaten and reportedly murdered by her husband and mother-in-law because they didn’t approve of her human rights activism. Similarly in January 2009, Uma Singh, a member of the Women’s Human Rights Defender Network was murdered by a group of armed men. Despite the legal provisions protecting women there has hardly been a change in society’s outlook towards women which is why they are still exposed to violent behavior both privately (in their homes) and publicly (society).

Despite the mostly societal mistreatment of women legislative efforts have planted the seeds of hope. The organization of education and awareness programs would assist in bringing about a change in the collective attitude and though this will likely take a long time, once it starts, there is hope that it will not be undone. Every little step, every single word against this age-old social inequality is a promise to the future.

Pratikshya Dahal is a law student from Nepal. She is currently volunteering in a campaign against sexual harassment and eve-teasing. She is a regular hiker, a nature lover and believes in collaborative efforts to make the world a better place to live in.

“On the bottom shelves of closets,/ the paper-dolls lay in cots,/ penciled-in eyes trained on doors/ that let in rabid dogs…”
Poem of the Week (31 July), by Saba Husain.